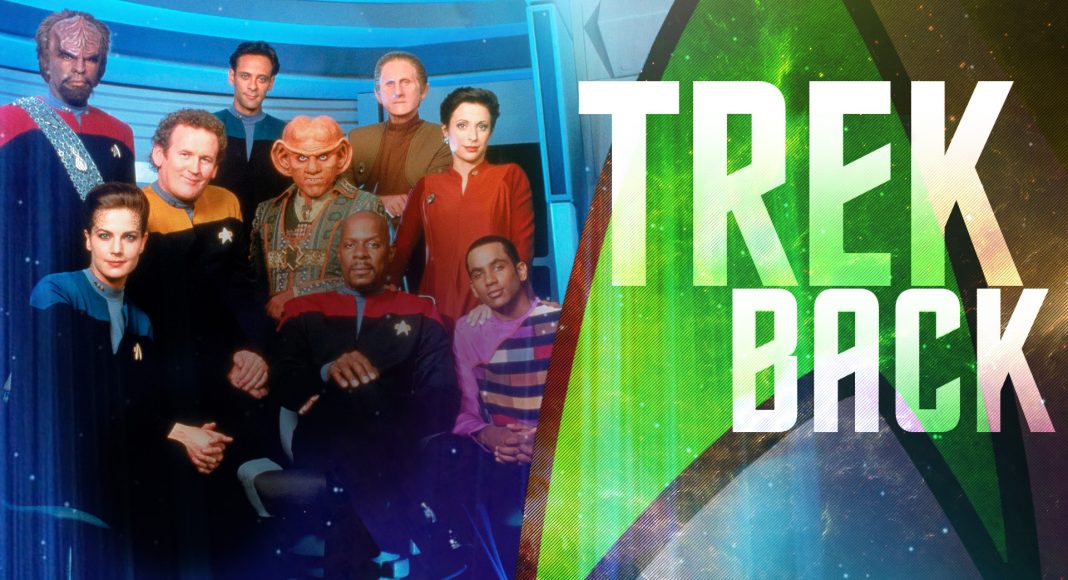 Up to this day, the Dominion War, introduced at the end of the Deep Space Nine fifth season, remains the most dreadful and complex conflict ever seen in the Star Trek galaxy. The war was a culmination of the show’s iconoclastic policy. The space station at the fringes of the Federation space and its crew led by Benjamin Sisko found themselves at the front lines of the raging conflict. For years they bravely fought against impossible odds. The station was lost, the ship – Defiant – went down in flames, the crew was physically and mentally hurt, and one of our heroes perished in the conflict. The Dominion War redefined our understanding of Star Trek. The ideals that Star Trek had propagated for decades turned out to be the most valuable when they were in danger to be lost.

For all its horrors and destruction, the Dominion War had to end. After all, Star Trek is a utopian story. All the efforts, sacrifices, and losses (and there were many), would be in vain if the Federation and our heroes would not prevail. As the show neared its end, its creators were preparing the explosive finale. Before embarking on a sweeping ten-hour epic arc, the showrunners decided to break the rules once again and gave us the episode that no one would expect.

The episode was not about the Dominion War. Instead, it dealt with the war’s aftermath. ‘Inter Arma Enim Silent Leges’ was the story that offered us a brief, but important glimpse of the postwar situation. It was the episode that charted the complex socio-political situation in the alpha and beta quadrants and fleshed out one of the most underrated alien species in the Trek galaxy.

‘Inter Arma Enim Silent Leges’ has the misfortune of having a complex name. As such, it rarely features in the “best of” list. And that is a shame. As the title of the episode, “In times of war, the laws fall silent” (translated from Latin), is perfectly illustrating its plot. The Dominion War is nearing its end, and doctor Bashir is invited to a conference on Romulus, of all places. However, this will not be an ordinary trip. Bashir is visited by an “old friend,” Section 31 agent Sloan. The spymaster explains to shocked Bashir that the good doctor can finally play his favourite hobby, this time for real. At the conference, Bashir’s task is to collect intelligence on the Romulan allies.

Predictably, Bashir is unenthusiastic about his mission. He does not like Section 31 and is unwilling to spy on an ally, while war rages on. Soon, Bashir discovers that his assignment got the official blessing of the Starfleet High Command. Sisko and Admiral Ross want to use this opportunity to learn more about Section 31. The show always took pleasure in treading the grey area, but this episode takes it to the next level.

En route to Romulus disguised Sloan informs Bashir of the true nature of his assignment. It is truly a complex plot, so I will try to summarize it. Sloan wants Bashir to investigate if a powerful Tal Shiar leader, senator Koval, has a medical condition that can be exploited as a cover for his assassination. Koval happens to be a strong opponent of the alliance, and his elimination would keep the Romulans in the war. Bashir is determined to expose the conspiracy, but Sloan seems to always be a step ahead. After his only ally, Admiral Ross ends incapacitated, our good doctor must act on his own. To this end, he recruits his Romulan colleague, and Koval’s opponent, senator Cretak.

Bashir’s investigation in ‘Inter Arma Enim Silent Leges’ makes for an excellent spy thriller, full of plot-twists, intrigues, and thrills. Eventually, Bashir is captured by Tal-Shiar and brought to Koval for interrogation. Soon, things get out of control. Sloan is killed while trying to escape, Cretak is declared a traitor, and Bashir is allowed to return to the ship. Only for the episode to reveal its final twist. Not only that Sloan is alive, but Koval, whom Bashir considered an enemy, is a Federation spy. Cretak’s career is ruined, or worse, but as Admiral Ross explains to a shocked doctor, the Federation’s interests are safe. Unwittingly, Bashir did his job.

‘Inter Arma Enim Silent Leges’ is a curious episode. On one hand, it portrays Starfleet as a deeply flawed organization, which abandoned its ideals and values. Admiral Ross is the last in the line of “evil” admirals and commodores seen in the franchise. Section 31, initially considered as a rogue organization operating beyond the purview of the Starfleet, is now revealed to be its extended arm, doing dirty work for the Starfleet brass. Yet, the situation is more complex. Bashir’s secret mission goes against the Federation and Starfleet ideals and values. The Dominion War, however, is not an ordinary situation. The mission was an act of desperation, done so the Federation can survive.

There is another important aspect to consider. The Romulans are now allies, but they are still deeply paranoid and deceitful people. After all, Tal Shiar is still controlling the Romulan Empire. Once the war is over, the Empire, intact by war, would be the most powerful faction in the quadrant. This is the closest we have ever come to Star Trek “realpolitik.” It could look like a wrong approach at first, but on the second viewing, it is nuanced and thoughtful planning.

This nuanced, thoughtful, grey approach is the show’s signature. The writer Ron Moore and director David Livingston had presented a complex and multifaceted story, set in a mysterious and intimidating setting. Up to this day, “Inter Arma Enim Silent Leges” remains the best portrayal of Romulan society. Although introduced as one of the first iconic aliens in Trek, Romulans never got much love. Unlike their peers, Romulans remained vague and ambiguous. DS9 made some improvements, but it still understated the Romulan importance. ‘Inter Arma Enim Silent Leges’ changes that offering a brief but valuable insight into Romulan politics and society, as well to their relationship with the Federation. The conversations between Bashir and Cretak are a pleasure to watch, as even if they understood each other’s words, they still fail to grasp their meaning. Romulans are a different culture, but they are willing to learn more about others. Lastly, they do not have a monopoly on subterfuge methods. As the episode has proven, the Federation could be more cunning than the infamous Tal Shiar.

The episode is a spy thriller. Thus, it is not surprising that Bashir is the protagonist. A man obsessed with classic spy stories, Bashir finally got an opportunity to play one for real. Predictably, the result is not what he expected. Smart and resourceful, Bashir is no match to Section 31 and ends being the one who is manipulated. Yet, this manipulation is expertly done, giving us an array of various characters’ motives and philosophies. The final scene is the best example of a doctor’s integrity. While admiral Ross appeared embarrassed by Bashir’s accusations, trying to find an excuse; Sloan has no regrets about what he has done. The contrast between the two characters’ reactions makes Bashir’s moral integrity stand out. He is a good man in an impossible situation, who despite all odds remained true to his principles.

In that way, ‘Inter Arma Enim Silent Leges’ respects the Roddenberry idealism, but in true DS9 spirit questions its meaning. Can such an idealism survive in a chaotic and dangerous world, marked by war and tragedy? More importantly, are our heroes able to preserve those ideals, even when they find themselves in a difficult position? Even if he has failed in his mission (or succeded, depending on the perspective), Bashir is proof that the answer is affirmative. Yet, to preserve the ideals and values, one has to make difficult choices. And sometimes, such choices require hard decisions. After all, “the needs of the many over the needs of the few.”