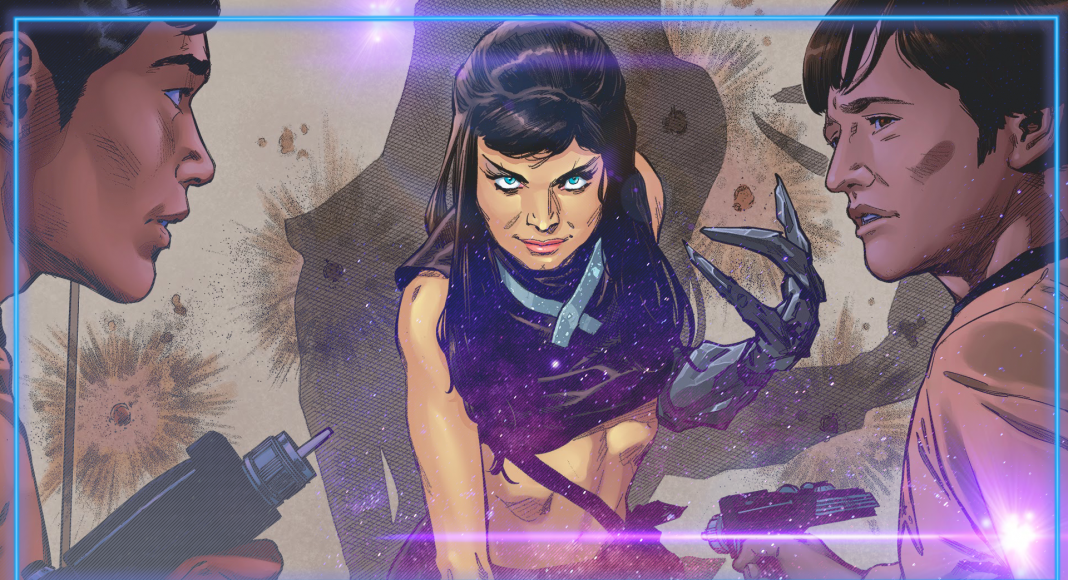 Year Five #19 continues right where we left off in issue 18 with Sulu and Chekov coming face to face with the shapeshifting Isis, companion of Gary Seven.

Issue 18 of Star Trek: Year Five seemed very timely in its release as it echoed similar events that our current world is facing. The USS Enterprise races to Proxima Centauri in response to a distress call which relays news that the world is suffering from a virus and its people are dying at an alarming rate. An investigation is launched, and Doctor McCoy steps up to try and find a cure. However, a surprise lies in wait as the long-term companion of the time traveling agent Gary Seven, the shape shifting woman called Isis seems to be responsible and appears to confront Sulu and Chekov.

Gary Seven and his companion Isis have appeared a number of times throughout Year Fives run. Attempting to kill Kirk and destroy the Enterprise, manipulating Federation Presidential elections and now, releasing a pathogen designed to wipe out the people of Proxima Centauri and lure Kirk back into their mists. The whole plotline of Gary Seven reminds me of Christopher Nolan’s take on the Joker in the Dark Knight film. The Joker appears at random times throughout the film and causes chaos within the linear narrative structure. Something that Seven and Isis seem to duplicate here, popping up when we least expect them to disrupt the ongoing narrative.

Year Five #19 picks up with Dr McCoy, who had been exposed to the virus locked in containment, something which as you would expect, he is not very happy about. He manages to convince Kirk that the risk to his life is irrelevant as he is the best person to save the people of Proxima Centauri. Placed back in a hazmat suit, he is allowed to continue his investigation. In issue 18 it was discovered that the virus was released because of an attack on the city and we learn that the devastation was actually caused by Isis who beamed up to the Enterprise upon her arrival at the planet. As Mr Spock begins an investigation into the attack with Caylx (last surviving member of their government), Mr Sulu and Chekov encounter Isis in one of the ships corridors.

Having already fought off numerous Starfleet personnel, Isis takes on Sulu and Chekov and their security team by changing into a Tholian, allowing her some immunity from their phaser fire. Her objective is to reach engineering with an unknown purpose, most likely explanation is to destroy the ship or at least severally incapacity her. This is the most vicious we have seen Isis as she takes out officer after officer until finally between the two of them, and some fine moves with a blade from Sulu, they manage to finally put her down. Answers to how she caused the virus, and her overall plan will hopefully be revealed in issue 20 as we start to enter Year Fives final run.

Meanwhile back with McCoy and Kirk in the new quarantined sick bay, a discovery is made that could help cure the citizens of Proxima Centauri. It lies in the very make of the human body as McCoy explains that since he has been exposed, he has suffered no symptoms and that he believes that his own biological make up could hold the key. McCoy sets a cure in motion and in spectacular fashion during the final few panels of Year Five #19. During their investigation, Spock and Caylx discover a strange device at the epicenter of the explosion, a device that could be a backup, a failsafe in case the first attack failed. With no time to study the device as it could explode at any moment, the device is beamed into space.

As with all of Year Fives run, the artwork and story telling has been exemplary and truly been one of IDW’s finest series of Star Trek comics to date. Year Five #19 is no different, building upon the mystery of Gary Seven and Isis while bringing classic Star Trek storytelling to the fold. It could be argued that the cure for the virus is found relatively easy and in the grand scheme of issues faced by Dr McCoy, this one was fairly easy to resolve.  Something that Year Five has done that I have not found with some recent Star Trek comics is that I want to find out more. It leaves me with a sense of anticipation for the next issue and I am excited to find out how the series will be resolved, and in truth, I will be disappointed when it finally comes to an end.

Stay up to date on all comic releases and news from the Star Trek Universe by visiting us on our social media: