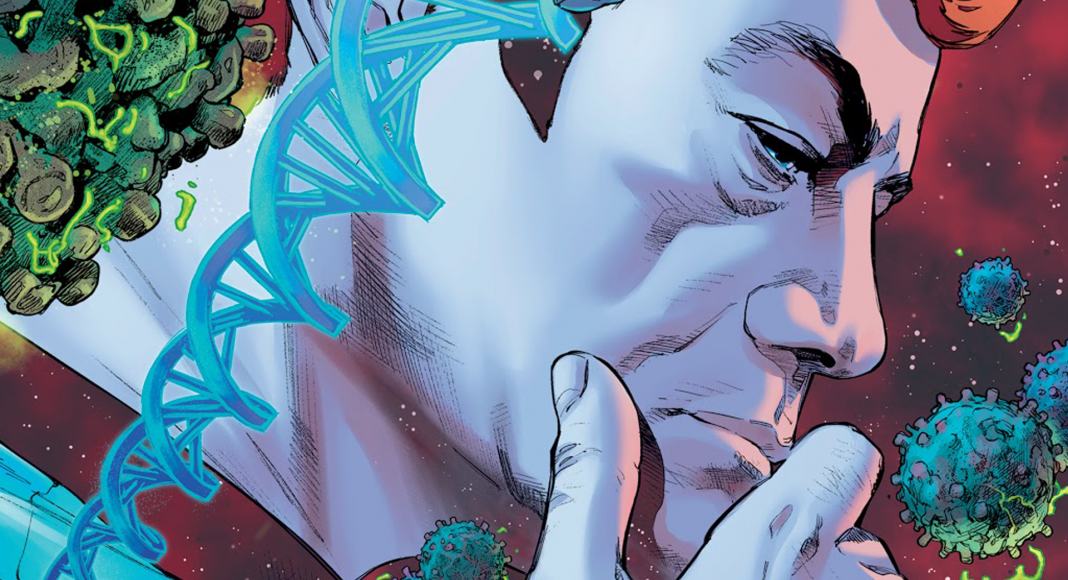 Year Five follows the journey of the original starship Enterprise during the end of its legendary five-year mission. When we last left the crew in issues #16, they had just thwarted an attempt by none other than Harry Mudd who sought to become Federation president. Now, as they continue towards their final destination of Earth, a mysterious distress call from Proxima Centauri beckons the Enterprise to intervene.

Star Trek: Year Five #18 sees the return of artist Angel Hernandez who is a regular contributor to IDW’s Star Trek comics. He previously illustrated Star Trek: Picard Countdown and is currently working on the Voyager comic Seven’s Reckoning. Hernandez is perfect for this story set during the Original Series, as his style lends itself to the bright and bold colours of the famed 60’s television show.

We begin the issue as many episodes of Star Trek do, with a captain’s log from Captain Kirk. Kirk laments that his time as captain will soon be over since as he is being promoted to Admiral. He feels a sense of remorse that he will no longer explore the stars, which is where his true passion lies. This foreshadows the events of The Motion Picture and The Wrath of Kahn, where we see Kirk as working Admiral and how little he enjoys his life. This leads him to become reckless and eventually be demoted back to Captain after the events of The Search for Spock

However, it seems that Kirk’s journey is not over yet. Uhura picks up a distress call from Proxima Centauri where a woman named Wairata exclaims that a virus has infected her people and that the population is dying at an alarming rate. One interesting side note is that Lt. Arex from The Animated Series can be spotted on the bridge. It is a nice touch to canonize him here as he was only ever previously seen on the obscure show.

It is also keen to note that this series is tackling the idea of a pandemic. Year Five previously touched on modern-day events when it dealt with the election of Federation President, and now it is bringing in the idea of a pandemic. Of all the events of 2020, COVID-19 is the one that has disrupted the world to the greatest extent. It is no wonder that this series would grapple with its implications as well. Star Trek has always given timely social commentary, and Year Five rises to the occasion by following in its forbearer’s footsteps.

Kirk meets with the crew to discuss their plan of action. Spock explains that the people of Proxima Centauri are descendants of a colony established by Zephram Cochrane in the late 21st century. Spock refers to Cochrane as “an explorer from Earth,” as if everyone in the room wouldn’t already know who one of the most famous humans of all time would be. Perhaps Spock is making an assumption about his fellow crew members’ lack of knowledge of history, but in the Star Trek universe, not knowing Zephram Cochrane is like not knowing Jesus.

The crew then mobilizes to investigate the crisis on the planet. On the bridge, the crew watches a visual of the planet’s surface and sees nothing but death and destruction. Shocked and awed, Kirk, McCoy and Spock beam down to Alpha Centauri in their spacesuits, which now act as proxy hazmat suits.

Back on the Enterprise, Chekov and Sulu make a shocking discovery: a unique power signature is emanating from the planet’s surface, one that is distinctly different from the people of Proxima Centauri. Chekov reveals that this energy signature comes from none other than the shapeshifting woman Isis, the longtime companion of the time-travelling agent Gary Seven. Gary Seven has been tormenting the crew of the Enterprise throughout this series. It is no surprise that he has something to do with this most recent crisis.

Kirk, Spock, and McCoy then find Wairata, the woman who sent the distress call. She says that there was an explosion that brought on this deadly virus, implying that this incident was manufactured rather than an act of nature. Spock and McCoy argue over what should be done with the infected civilians. McCoy argues for taking them back to the Enterprise, while Spock says it is too dangerous. This argument mirrors many of the real-world discussions that have occurred due to the outbreak of COVID-19.

However, the argument is cut short when it is revealed that McCoy’s suit has been compromised, exposing him to the virus. Kirk then orders him back to the ship, against McCoy’s will. We close out the issue by cutting back to the Enterprise, where Sulu and Chekov discover that Isis has infiltrated the ship and is out for blood.

This concludes Star Trek: Year Five #18. This was an exciting issue that introduced a new conflict to the crew of the Enterprise and further complicated the antagonistic relationship Gary Seven and Isis have with the crew. All of the events of the series orchestrated by Gary Seven seem to be leading to something big. What that is, only time can tell.

What are your thoughts? Why not leave a comment via our social media platforms: