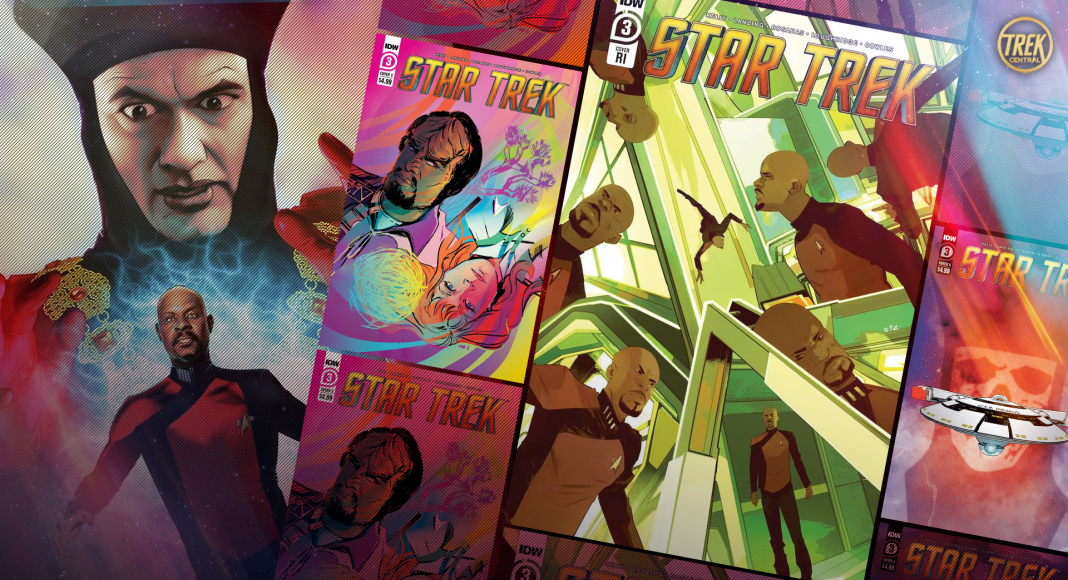 IDW’s Star Trek #3 continues the story of Benjamin Sisko’s return from the Bajoran wormhole and his quest to stop whatever is killing the galaxy’s most powerful entities. Joined by a crew of characters spanning almost all generations of Star Trek, Sisko now faces the most powerful entity of them all, Q.

One of the most glaring aspects of this issue is the change in art direction. This issue features two artists that did not work on the previous issue, Ramon Rosanas and Joe Esima. While Rosanas takes a more realistic, straight-forward approach to the characters, Esima takes a more stylized, cartoonish approach. One consequence of this, however, is that the characters can often look very different than their live-action selves. Especially someone like Dr. Beverly Crusher.

Star Trek #3 heavily emphasises a new character to Star Trek, T’Lir, a Vulcan Starfleet officer serving on the USS Theseus. But something is off about T’Lir. He keeps repeating the mantra “I am T’Lir. A Vulcan of Starfleet.” throughout the issue. Him repeating this may imply that he his neither of those things and is trying to hide his true identity. He also exhibits odd behavior such as deactivating the sonic shower safety parameters and glowing towards the end of the issue. His intentions towards the crew seem genuine, but he may have ulterior motives.

Keeping it in the family

Another new addition to the crew is none other than Jake Sisko, Benjamin Sisko’s son. We see him following in his family’s footsteps by cooking gumbo. It’s good to see Jake take on this tradition, since he never showed much prowess in Deep Space Nine. It is also curious Jake would be on the Theseus, considering how dangerous the mission is.

When Q enters the story, he immediately wreaks havoc on the Theseus, creating fantastical illusions to fight the crew. But T’Lir has an idea to stop Q. He suggests isolating him with “Extra-Dimensional Tachyons.” This plot device to rein in Q felt a bit unearned. Q is the most powerful being seen in Star Trek. It seems unlikely that shooting him with some particles would be able to contain him. However, this was T’Lir’s idea, and something odd is up with T’Lir. Maybe this out-of-the-box idea is somehow connected to T’Lir’s identity.

When T’Lir and Jake run to Engineering to implement T’Lir’s plan, they must pass through the chaos Q has made of the ship. The artist uses a fun panel structure to show the various obstacles T’Lir and Jake must overcome, from musketeers, to ballroom dancing to flashbacks to The Original Series episode, “Errand of Mercy”. The artist manages to fit eight different scenes of Jake and T’Lir avoiding obstacles on just one page, using stacked horizontal panels to represent the different corridors. A clever use of art direction and storytelling.

Q on the run

Through all of Q’s toying with the crew of the Theseus, we never see Q interact with Data or Worf, who are both on the ship. This is primarily Sisko’s story, but Q has more history with Data and Worf than Sisko, so it was surprising we didn’t ever see them together. Especially surprising since in Star Trek #3, we read Captain Jean-Luc Picard’s account of Q with the Enterprise in an in-universe log.

One interesting plot development towards the end of the issue is that Q is apparently aware of the galaxy’s god killers. He and the Continuum are going into hiding. If the Q are concerned about this threat, it must be very powerful.

Overall, this lighthearted issue displayed Q’s antics to the extreme. But despite its jovial nature, the issue displayed some excellent writing, specifically in relation to Sisko’s character. His ruminations on his time spent in the Bajoran wormhole were compelling and thoughtful. Sisko is not the man he was, and exploring this new version of him is fascinating.