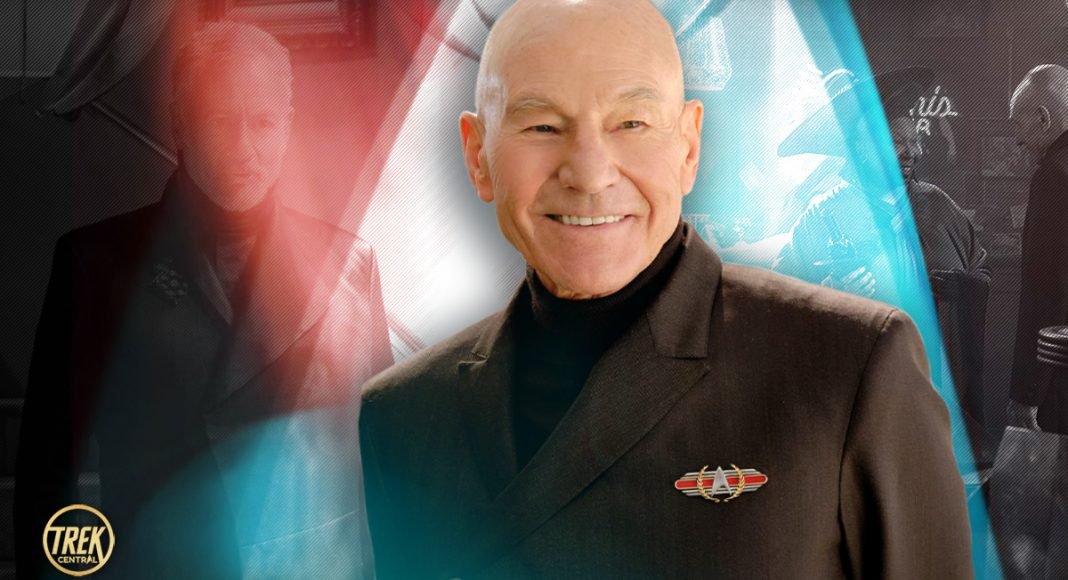 When the first season of Star Trek: Picard ended nearly two years ago, we saw the La Sirena crew warp off to an unknown destination. Little did we know that two years and a pandemic would separate us in time until we saw these characters again. A similar period of time has also passed for the characters themselves, and quite a bit has transpired in that time, and we as the audience are dropped immediately into this new world.

In my head, director Doug Aarniokosi yelled “warp 10” instead of “action” when filming this season two premiere, “The Star Gazer”, because we find ourselves on a new Starfleet ship – a new Stargazer – that is under attack by an unknown force. What’s more, the La Sirena crew is present, and actively in Starfleet. But it does not last long. The ship is seemingly destroyed on an auto-destruct order from Admiral Picard and we are transported 48 hours earlier back to Chateau Picard to learn of the events leading up to this cataclysmic end.

MAIN CHARACTERS: WHERE ARE THEY NOW?

A quick rundown of where the main characters how find themselves:

The updated setting for these characters strikes a different direction for the series. Season one depicted Starfleet at odds with Picard, and Picard with odds with, well, almost everyone. That setup worked for the theme and tone of season one, where Picard dealt with his personal and professional failures. The first season had its successes, but it was melancholy and required patience to get through some of the season-long plot points and odd pacing issues. Heck, there is very little about season one that is referenced. We get a hand-wave explanation as to why Dr. Jurati is not in prison. Picard’s transition to the artificial body only has two brief references. All this tells us that this show is looking forward and charting a new course. It’s a palate cleanser.

I’ve seen some folks in the Trek fan community call Picard season two a reboot for this iteration of Star Trek. I disagree with that interpretation. The show has is firmly set in a new chapter, but it follows naturally from season one. The Jean-Luc we meet in this episode is the Jean-Luc of old: he’s lively and engaged (pardon the pun), he warrants the respect from those around him. He’s sought after as an experienced Starfleet hero. But he is only here because he rediscovered himself in season one.

Showrunner Terry Matalas and his writing staff aren’t letting Picard off the hook, though. The episode establishes that this season will have Picard still looking inward, and backward. This is natural for a person in the latter part of their life. The task for the writers is finding something unexplored in this character that can be uncovered. They appear to have found it. Picard has never married. He lives alone at the chateau with his active Starfleet days mostly behind him. His closest friends are at a distance; they’ve either passed away or are living their lives away from where Picard finds himself. In the passing of time, one of his Romulan counterparts, Zhaban, has also died. His wife, Laris, still lives and works at Chateau Picard. She and Picard clearly have romantic feelings for one another, and it appears as though they are about to act on those feelings until Picard backs away. You can see the turmoil in him. He wants to love, but he hasn’t ever allowed himself to truly experience love.

As easily as Picard can turn love off, he can turn duty on. The next day he delivers a speech at Starfleet Academy and is the mentor that we all know he is. Yet the personal rumination still reside in his mind, and he turns to someone who knows him best: Guinan.

Whoopi Goldberg seamlessly steps back into the role of Guinan. She’s always been a sage, and served as Picard’s guide on many missions in this Enterprise days. That role continues in Picard and serves a critical role in establishing themes of connection and disconnection that will play a significant role in the season. This theme, too, does not seem to be specific to Picard. In the first episode, we learn that Raffi and Seven’s relationship is disrupted by their duties to Starfleet and the Fenris Rangers, respectively. We likewise learn that Rios and Jurati had a relationship between seasons that did not work out. As the characters bounce between dimensions and time periods, they seem destined to work out their relationships as they save the galaxy. It’s yet to be determined which will be the more challenging task.

Behind the heart and sole of the episode is the lingering knowledge that Q will appear and disrupt what seems to be Federation life back-to-normal. The episode is bookended aboard the Stargazer. The destruction of that ship is not the end. It is the catalyst for the entire season. Picard awakens outside his chateau. He’s disoriented. He’s wearing insignia that is unfamiliar to him. The chateau has changed; its more militaristic, far darker than its usual aesthetic. He calls for Laris, who is nowhere to be found. He’s house help is an android, one similar to F8 from the first season. And then the voice fills the empty chambers. Picard knows it, and turns to see a face of his longterm gadfly, Q. Time has had its bearing on Picard. Q appears as he always has, but immediately changes form to replicate Picard’s age. As the confront each other, Q tells Picard he is on the end of the road not taken. And as he promised way back in The Next Generation’s finale, “All Good Things”, the trial never ended. Picard is very much back on it.

Fans couldn’t have asked for a better season premiere. Those that enjoyed the first season, like I did, can appreciate the trajectory that Picard now finds itself on. Season one is the launching pad for what occurs in this episode. But for those that didn’t find the first season favorable, I implore you to give this another chance. Take this as an invitation. The tone is more familiar to The Next Generation, and Picard himself is true to that version. The production design, led by Dave Blass, feels like a true continuation to what we know of the 24th Century. We know the show has included Trek vets like Doug Drexler, John Eaves, Denise and Mike Okuda, among many others. This inclusion has tied together the visual continuity with Berman/90s-era Trek in ways that we have not seen yet in the Kurtzman-era. We Star Trek fans clamor for a canon look and feel to this universe. That is all here. And there’s enough easter eggs and nods to earlier series to have fans keeping their magnifying glass ready to use at a moment’s notice. But a good show requires more than those visuals. It requires a captivating story with characters we care about. If feels like Star Trek: Picard has finally found this perfect blend.