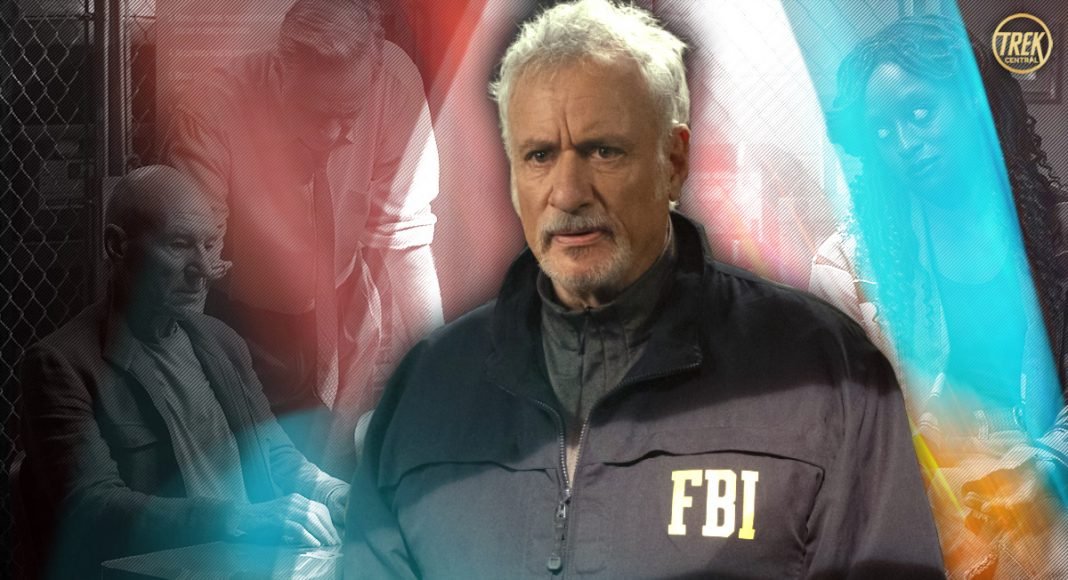 We are now 80% through Picard’s second season, and 3/4 of the episodes have taken place primarily or entirely in 2024. Given where things stand, it is likely that the crew will not be returning to the 25th Century until the finale. The season is moving at a methodical pace, taking its time to ensure that the future is restored. But the longer the La Sirena crew is in Los Angeles, the more they seem to be derailing the actual mission instead of ensuring its success. Star Trek: Picard – ‘Mercy’ has beamed down!

The episode begins with Picard and Guinan in custody, the second time a cast member has been apprehended by law enforcement this season. In this case, the aforementioned derailing has resulted in Picard and Guinan’s arrest, as their beaming in broad daylight and leaving behind of com badges put led authorities on their trail.

The pair are interviewed by FBI Agent Wells, who, despite my prediction last week, is not Voyager’s Ducane. But I was correct in that Wells seemed off. And I’m in good company. Guinan too realized this and used her senses to hone in on Wells’ motive. However, Guinan was a little too accurate, and she is taken away for a separate interrogation.

Guinan, however, is met by Q. Q’s arrival is both surprising and tardy. Guinan expected a normal FBI agent, but Q appears in this disguise. We finally get some new bits of information about Q’s motivations, though we certainly lack a full picture of what he is doing. It’s confirmed that Q is sick, and he is dying. Q being Q, he started off sounding whimsical about death, something he thought he would never face as a seemingly omnipotent being.

Q’s situation remains one of this season’s most gripping stories. I’ve previously argued that Q is best used in small doses, and the season has largely done that successfully. But with only two episodes remaining, we know surprisingly little of why Q changed reality, and why he is so hostile toward Picard. And we likewise know nothing of how or why he is dying. There’s a lot of ground to cover in the final two episodes. Some answers on this front are overdue.

Before his departure from Guinan, he gives her some clues, seemingly aware that she would pass them on to Picard. Q has acknowledged that he isn’t responsible for Picard and crew being in the 21st Century but cryptically notes that humans are stuck in the past.

Seven and Jurati are still on the search for Jurati, who is now nearly entirely under the control of the Borg Queen. The search offers some new fascinating insights into the horrors of assimilation. Jurati is actively seeking metals to hasten the assimilation process, as it aids the organic material to adapt to nanoprobes. Seven is able to recall this process from her childhood assimilation, showing that this trauma lasts decades. I’ve appreciated this show’s new angles on the Borg, both this season and the last one. Seven, like Picard, has been wrestling a lot with her past, which continues as one of the season’s main themes.

What is becoming tiring is the bickering between Raffi and Seven. These are two strong characters, both of whom I enjoy quite a bit. At the start of the season, their back-and-forth established why their (mostly unseen) relationship didn’t work. But I hope we get to see these two thrive as individuals. And if that happens with the two of them rekindling their romantic relationship, then great! It would be a wonderful end to see these two together.

Raffi, too, is grappling with her past, though her’s is a far more recent one. We learn that she is responsible for Elnor’s Starfleet commission, and thus she feels as though it is her fault that he died. This whole sequence is a bit weird. We learn of this immediately after Seven accuses Raffi of being manipulative, and so the flashback sequence with Elnor stands out as an odd one.

We’ve seen Raffi be a lot of things, but manipulative isn’t one of them. I’m not sure this added anything substantial for the Raffi-Seven dynamic, and it just made her look selfish in the sequence with Elnor. I can’t help but think there are better ways to deal with Raffi’s guilt over Elnor than the one presented.

“Mercy” detours into more information about Dr. Soong and his “daughter”, Kore. Kore continues on her path of discovery, a haunting realization about her identity and that of her father, who has created her. Q has somehow inserted himself into some of Soong’s tech and offers Kore a way out by means of a blue vial similar to the one he previously gave Soong. That Kore so willingly takes the vial from strangers is surprising, and doubly so given the last experimental drug she took had significant side effects.

Honestly, I’m having a hard time caring much about these characters. I see very little evidence these characters will be around long-term, given the entire nature of the season. It’s fun seeing Brent Spiner play another Soong, and his interactions with Q have been fun. Yet all of this seems like a story detour that will have little long-term significance.

The Dr. Soong character is aided later in the episode when Jurati-Queen arrives at his home.

Onboard the La Sirena

Rios and Teresa and her son, Ricardo, continue to hang out on board the La Sirena. These two characters are sweet, and Teresa and Rios have a natural chemistry that is fun to watch. But like with Kore and Dr. Soong, I’m having trouble connecting with characters that I know are going to be phased out shortly. And I still fear that Rios will be leaving the show, so my lack of connection here might be based on that fear. Anyway, there’s not much going on here, and Rios seems far more interested in Teresa than the mission at this point, which is surprising given his captaincy of the Stargazer.

Guinan Can Do What, Now?

We’ve known since the second season of The Next Generation that El-Aurians have a unique ability to sense distortions in space-time, and even transcend its traditional boundaries of it. But what we haven’t seen is their ability to interject in spaces that they do not physically occupy. Until now.

With Picard still in custody, and Guinan receiving clues from Q, she is able to manifest herself in the room with Picard and Wells to let Picard know that Wells, too, is fixated on his past experiences. Picard jumps on the signal and leans into Wells.

We learn that Guinan’s intuition about Wells is correct and that as a child he had a chance to experience with a Vulcan science team – one that he associated with an attack. The vague descriptions of the aliens give Picard enough information to know that Wells is talking about Vulcans and that what he interpreted as an attack was instead a mind-meld attempt.

With an established trust between the two, Picard admits his identity. While he’s not an alien, he is from the future and here to ensure that the Europa Mission is a success. Wells lets Guinan and Picard go free, as he himself is out of a job for failing to report evidence.

While I liked the sequences with Picard and Wells, I’m struggling to understand what relevance this has to the larger story. Picard’s detainment seemed to serve little purpose. It’s the second time this season that the main characters have been arrested, and freed, without much substance. Earlier this year, Rios was under arrest by ICE and quickly moved on from the situation.

Here, Picard is detained with very real evidence by a man who has awareness they are not who they seem to be, only to let them go after he was fired. Maybe Wells will have a role in the next two episodes that will explain this more, but as it stands, I’m a little confused by the time spent here with only two episodes remaining and much to still cover.

The Band Back Together

Back at Guinan’s bar, Picard reunites with Raffi and Seven and makes contact with Rios. Rios briefs the three on La Sirena’s situation, which is partly under Borg’s control. With Jurati still on the lose, the team deduces that the Queen’s plan is to assimilate Earth and use the ship as a means to do so.

The threat is real. After luring Soong with the promise of a legacy, he recruits a team of special soldiers to aid their cause. As the episode ends, the Queen assimilates one. Her first drone. The Jurati/Queen storyline continues to set high marks for the season. As we inch closer to the finale, we still have much to cover to save the future.