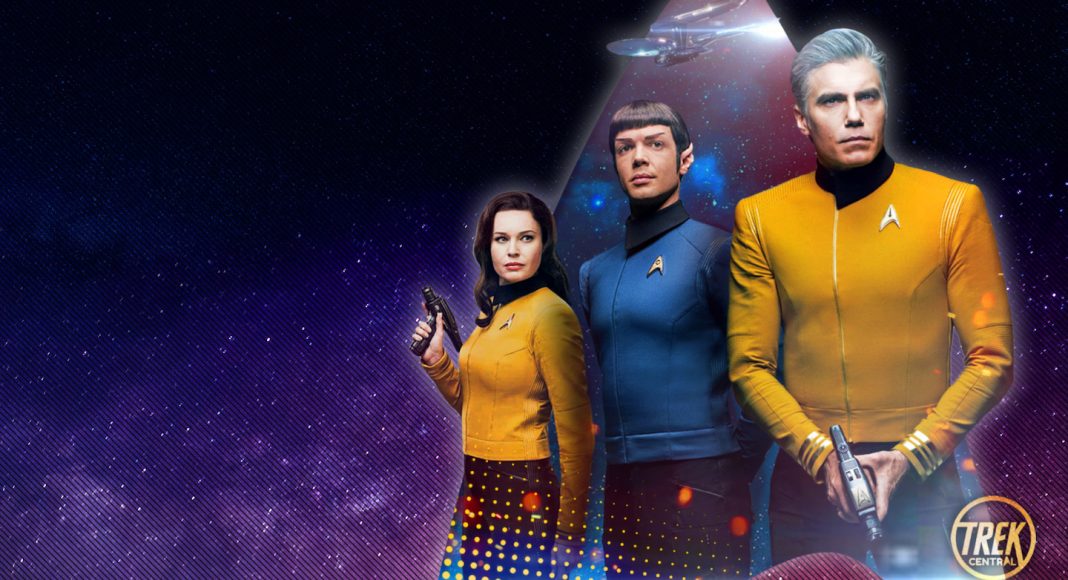 It’s the news we’ve all been waiting for: Star Trek: Strange New Worlds may just be on the cusp of cameras rolling on season one.

News has been trickling along for months now, just enough to keep us all hopeful that Strange New Worlds was on track and not lost in development hell (like many a series right now). There’s been little clues here and there, including those showing the design stage of pre-production was continuing during last year’s pandemic lockdowns in the US and Canada (and much of the world). Various industry websites also listed the construction stage would begin at the end of August 2020, with new sets being built for the series. And finally, late last year, an actual filming commencement date appeared on the slate of various industry sites for February 2021, though there was no official announcement.

Fans paying close attention held their breath hoping that, pandemic allowing, the show would stay on track. And that moment finally seems to be here.

A couple of week’s ago we got a hint when Anson Mount arrived in Canada with his wife Darah, and they began their quarantine (Canada requires a 2 week self-isolation period for all travellers). Yesterday Ethan Peck’s instagram post also confirmed he was in Toronto.

There’s no sign Rebecca Romijn is in Canada yet, but with two of the three leads there, especially considering the limited circumstances you can cross into the country, it doesn’t take much to put two and two together and get very excited.

WHAT WE KNOW SO FAR

If all goes according to plan, then filming on Strange New Worlds should begin on Monday, February 22nd and roll through until the end of July.

Season 1 is slated to contain 10 episodes with the premiere written by Executive Producer and Showrunner Akiva Goldsman, who could possibly also take on directing duties according to some industry listings. Joining him as Executive Producer is of course Alex Kurtzman, along with Heather Kadin, Jenny Lumet, plus Rod Roddenberry and Trevor Roth (of Roddenberry Entertainment). And the writing and producing team including Akela Cooper, Henry Alonso Meyers, Davy Perez (who took part in last years Star Trek Day panel), and Aaron Baiers.

A recent Deadline article also revealed that novelist Robin Wasserman was involved with the show, and may have penned an episode for season one.

IT’S BEEN A LONG ROAD…

Possibly the most eagerly anticipated of Star Trek’s slate of incoming new series, it was confirmed a Captain Pike show entitled Star Trek: Strange New Worlds was in development on May 15th last year, when stars Anson Mount, Rebecca Romijn, and Ethan Peck, along with Exec Producer Alex Kurtzman, took to social media to make the official announcement.

It’s been over 8 months now since that announcement, and even longer still since new footage of the characters has been seen. The Short Treks featuring Captain Pike, Number One, and Lt. Spock first aired in December 2019, and Star Trek: Discovery season 2 at the beginning of that same year.

The odd “unofficial” posts on social media have left a breadcrumb trail of hopeful signs, with new sets being designed and built, and casting breakdowns of new characters leaking out.

“Fans fell in love with Anson Mount, Rebecca Romijn, and Ethan Peck’s portrayals of these iconic characters when they were first introduced on Star Trek: Discovery last season,” said Julie McNamara, Executive Vice President and Head of Programming, CBS All Access. “This new series will be a perfect complement to the franchise, bringing a whole new perspective and series of adventures to Star Trek.”  – From the Official CBS Website

Showrunner Akiva Goldsman promised that Strange New Worlds would be more episodic, with character arcs to tie it all together and allow for emotional growth. That’s a departure from the format of Discovery and Picard, though season 3 of Discovery certainly had more self-contained episodes.

A lot has been said about the theme and tone of the series, with promises it would harken back to an older series vibe, with a brighter, more optimistic feel. And of course, with a title like Strange New Worlds, it seems a given that storytelling will be focused on adventure and exploration, seeking out “new life and new civilizations”.

The only characters so far officially confirmed are of course Captain Pike, Number One, and Lt. Spock.

Currently, there is no other official casting information, but it seems a good bet that characters like Lt. Amin (Samora Smallwood), who appeared in both the Discovery season 2 finale ‘Such Sweet Sorrow’ and the Enterprise based Short Trek ‘Q&A’, will come along for the ride.

Amrit Kaur’s young Cadet Sidhu certainly made a strong impression in Short Trek ‘Ask Not’, and is also a good possibility to return.

And of course, there’s been that unofficial casting breakdown information released by site Illuminerdi, suggesting that a slate of new characters will join the crew. You can read those casting breakdowns here.

Now rumours are rife in the Star Trek fandom, and it’s easy to dismiss this information as mere clickbait, but a little look around the interwebs at the time revealed a number of self-tape auditions. Character names matched the breakdowns, and scenes contained some interesting moments that made it plain what show they were for. What wasn’t clear, however, was if these character’s names were the official ones. Codenames are pretty standard fare for top-secret productions. Anson Mount himself originally went up for the role of one ‘Captain Parker’, and of course, that turned out to be Pike. So there’s a possibility there may be a classic character or two lurking in those character breakdowns.

ICYMI – While we haven’t had much definitive news, we did get treated to the first official SNW panel on Star Trek Day, September 8th last year. It gave fans a chance to hear from showrunner Akiva Goldsman, plus writers Henry Alonso Meyers, Akela Cooper and Davy Perez, and series stars Anson, Rebecca and Ethan about their hopes for the show, their feelings on the long history of Star Trek and what the franchise means to them.

Of course, once the hurdle of production beginning on Strange New Worlds is over, our thoughts immediately turn to “when will we get to see it”? Currently, Discovery is shooting it’s 4th season, starting a few months ahead of SNW. Plus the second season of Picard was set to begin this month but was once again delayed, that also should hopefully beginning production soon.

Add to that the animated series Star Trek: Lower Decks Season 2 is also already well into production. And a new animated series Star Trek: Prodigy, which returns one Captain Kathryn Janeway to the fold, with Kate Mulgrew reprising her role (on voice duties). There’s certainly a hell of a lot of Trek being cooked up in the Viacom/CBS kitchen, and who knows what we will be served first.

Leading up to the Superbowl we were served up a variety of commercials for the incoming Paramount+ streaming service (which CBS All Access will rebrand to on March 4th).

Both Anson Mount’s Captain Pike and Ethan Peck’s Lt. Spock featured in multiple of these commercials, along with an appearance from Sonequa Martin-Green and of course, Sir Patrick Stewart ruling Mount Paramount from the top. But Pike and Spock’s inclusion does hint at great things for these characters, and is a good sign that Strange New Worlds may well be on the way sooner, rather than later.

We’ll keep you up-to-date with the latest Star Trek Universe news, as and when it happens, by following our social media: