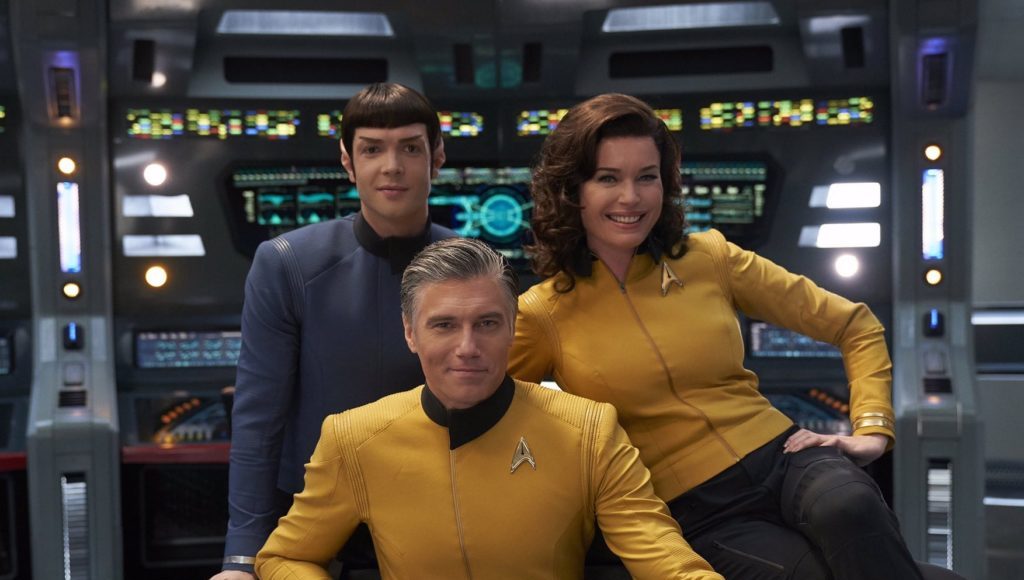 Our Hopes for Strange New Worlds

Star Trek: Strange New Worlds was announced following the success of Anson Mount and Ethen Peck in the roles of Spock and Pike respectively. With the show due to enter pre-production, we take a look at some of the things we would like to see, as well as those we don’t.

When Star Trek returned to our TV screens in 2018 it brought about a few changes. Production values had been ramped up with CBS spending more money on the show (mainly down to the deal they had in place with Netflix), the decision to use the show to launch the new CBS All Access streaming service, the place within the timeline that the show is set; but most notably was the change from an episodic format to a complete series narrative. While I personally had no issues with this as it has become a network standard to have a serialized approach to modern TV storytelling, it did upset a fair few members of the Trek fanbase. It was a big step away from tradition which is something they followed up with Star Trek: Picard.

While series one of Star Trek: Discovery split the fanbase down the middle it achieved its goal. CBS All Access was a success, new fans had been brought to the franchise and overall reaction to the show was positive and CBS quickly moved into production on a second season that was more accepted by long term fans. It is safe to say that one of the main reasons for this was the introduction of the USS Enterprise and legacy characters Captain Pike, Spock and Number One played by Anson Mount, Ethan Peck and Rebecca Romijn, respectively. They proved to be a massive hit with fans who cried out for more which CBS duly offered up via some of the Short Trek episodes.  And while CBS was busy working on two new shows, Star Trek: Picard and Star Trek: Lower Decks with two other shows also in development (Section 31 and Prodigy) the fans still wanted more of Anson Mount and his Enterprise team.

It was also revealed recently that Strange New Worlds will be going back to the episodic ‘Planet of the Week’ storytelling that fans wanted so much and bring a traditional feel to Star Trek and what some might argue is really missing from some of the newer shows.

So, while we got what we wanted, a show that returns to Treks values and core ethos of seeking out new life and new civilizations and exploring the galaxy; what is it that we actually want to see? Speculation has already started online but below we outline some elements that we both want and don’t want to see in the upcoming series.

Let us start with pretty much the main area for me. Legacy characters. One of the biggest controversies from Star Trek: Discovery was making one of the main characters, Michael Burnham played by Sonequa Martin-Green (who is an amazing actress FYI) the sister of Spock. This caused great debate amongst the fans as it’s well known that Spock never had a sister and its never been a part of Trek lore. Thankfully, they did not make her a blood relative but adopted and many fans argued back that we never knew Spock had a brother either, but we learned different thanks to Star Trek V: The Final Frontier. The way season two ended offered us a great explanation of why Discovery and Spocks sister had never been mentioned before and we can see from the episode ‘The Pegasus’ of Star Trek: The Next Generation that Starfleet are great at keeping things confidential and secret. Seriously, if anyone ever argues the fact that there had never been a mention of mutiny in Starfleet or the technology used on the Discovery, check that episode. Picard informs Riker of the difficulty he had in obtaining confidential information including pulling in a few favours. I digress.

Bringing in Spock and then later, Pike and Number 1 has had a fantastic outcome as we now have a show that we all hope will be similar to the Original Series or The Next Generation making its way to our screens. But would lightning strike twice? There are already rumours circulating that a young James T. Kirk might be making an appearance in Strange New Worlds. Kirk has been well-mined over the years and his character has been fully explored. The benefit of Pike and Number 1 is that we do not have too much to go on and they have characters that would enjoy being fleshed out more with a whole backstory to explore.

For me, I think that Strange New Worlds needs to stand on its own two feet and not rely on the reintroduction of established characters. Let us be introduced to new characters who can create a legacy for themselves. I can get on board with minor characters from the Original Series making an appearance such as a young Matt Decker making his way in Starfleet or even Garth of Izar in some capacity but as for core characters, I would like them to stay clear.

I am a huge fan of Star Trek: The Original Series and while I didn’t gripe too much with the changes made to the Klingons in Star Trek: Discovery, I do wish that we saw Klingons who had been affected by the Augmentation virus established as the main reason for the differences between the Original Series Klingons and those seen from the Motion Picture onwards. I would love it if the characters of Strange New Worlds interacted with both sets of Klingons, it would go a long way with helping the continuity and evolution that has been established with the Star Trek universe.

Another rumour circulating online is that the Prime Universe version of Jason Isaacs Captain Lorca might make an appearance in an episode of Strange New Worlds. How is unknown, of course, it might be that he is found while an Away Team is investigating some anomaly on a random planet. I am not objectional to this, Lorca is an original character created for New Trek so his appearance would not come as a surprise and it would be fund to explore what happened to him following the incident that brought the Mirror Lorca into our universe. Jason Isaacs himself has recently added fuel to the fire of his return to the franchise albeit as a possible different character but this could just be a way to throw people off the scent.

Personally, I do not believe that this will happen. I think if Lorca were to return it might be in one of the Short Trek episodes that have proven quite popular amongst the fan base but I do hold out a little hope that we see him pop up in Strange New Worlds.

As mentioned previously, the characters of Pike and Number 1 have the potential to be explored for the first time. As it stands, we know some bits about Pike; when he became captain, when he has his near-death accident and how he ends up living out the rest of his days on Talos IV. There is a lot of unknowns in between those instances but that is nothing compared to Number 1 who we literally know nothing about. We are not even sure if her supposed name of Una, which was given to her in one of the extended universe novels is her canonized name. a quick look on Memory Alpha suggests that it, but that is my point entirely, no one is sure of anything when it comes to the character. Thankfully, this is already being addressed by the writers of Strange New Worlds as at the recent Star Trek Day panel, Rebecca Romijn revealed:

“The writers’ room has floated an idea for Number One’s backstory, I’m not going to reveal it, but it blew my mind.”

So, it looks like it is a key focus for the writers as well which is exciting to hear especially when it comes to an idea that blew the actresses mind.

This is a minor one for me if truth be told as the way the new Star Trek programs are being filmed is just amazing to watch. The set designs, new bridge and ship elements are incredible, and it is a big round of applause to the people that make that happen. However, as this is set before the Original Series and Strange New Worlds will be somewhat bridging the gap between Pike and Kirk. I would like to see the set designs go some way to marrying up with what we saw in the Original Series. Not all the way of course because it would look a little silly but to a point. I understand that modern set design is light years away from what they had in the 60’s due to costs and technology and that a spaceship needs to look very futuristic, but if they could just bring in some of the original colour schemes I would be a very happy fan.

What would you like to see in the upcoming Strange New Worlds? Let us know by getting in touch via one of our social media platforms