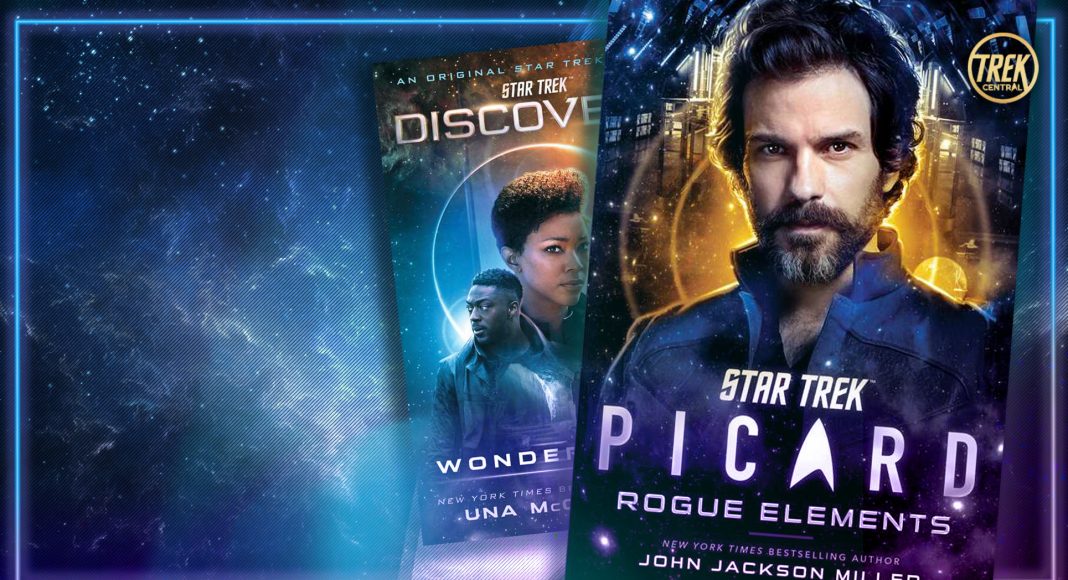 Despite the delays in the Star Trek Universe television shows hitting the air, and no release dates in sight, Star Trek fans do have a whole slate of new novels to look forward to over the coming year such as ‘Rogue Elements’ and the ‘C trilogy’.

Star Trek: Discovery novel ‘Wonderlands’ recently revealed it’s cover, and now we’ve uncovered a brand new as-yet-unseen cover for Star Trek: Picard novel ‘Rogue Elements’. The new novel will focus on the character of Cristóbal Rios and delve into his backstory, only hinted at so far on Picard.

Check out the full synopsis below for ‘Rogue Elements’, and the rest of our round-up for Simon & Schuster’s 2021 release slate from Gallery Books.

Starfleet was everything for Cristóbal Rios—until one horrible, inexplicable day when it all went wrong. Aimless and adrift, he grasps at a chance for a future as an independent freighter captain in an area betrayed by the Federation, the border region with the former Romulan Empire. His greatest desire: to be left alone.

But solitude isn’t in the cards for the captain of La Sirena, who falls into debt to a roving gang of hoodlums from a planet whose society is based on Prohibition-era Earth. Teamed against his will with Ledger, his conniving overseer, Rios begins an odyssey that brings him into conflict with outlaws and fortune seekers, with power brokers and relic hunters across the stars.

Exotic loves and locales await—as well as dangers galore—and Rios learns the hard way that good crewmembers are hard to find, even when you can create your own. And while his meeting with Jean-Luc Picard is years away, Rios finds himself drawing on the Starfleet legend’s experiences when he discovers a mystery that began on one of the galaxy’s most important days.

In a desperate attempt to prevent the artificial intelligence known as Control from seizing crucial information that could destroy all sentient life, Commander Michael Burnham donned the “Red Angel” time-travel suit and guided the USS Discovery into the future and out of harm’s way. But something has gone terribly wrong, and Burnham has somehow arrived in a place far different from anything she could have imagined—more than nine hundred years out of her time, with Discovery nowhere to be found, and where the mysterious and cataclysmic event known as “the Burn” has utterly decimated Starfleet and, with it, the United Federation of Planets. How then can she possibly exist day-to-day in this strange place? What worlds are out there waiting to be discovered? Do any remnants of Starfleet and the Federation possibly endure? With more questions than answers, Burnham must nevertheless forge new friendships and new alliances if she hopes to survive this future long enough for the Discovery crew to find her.

While attempting to settle in as commandant of Starfleet Academy, Admiral James T. Kirk must suddenly contend with the controversial, turbulent integration of an alien warrior caste into the student body—and quickly becomes embroiled in conflict when the Academy controversy escalates to murder. Meanwhile, Captain Spock of the USS Enterprise and Commander Pavel Chekov of the USS Reliant are investigating a series of powerful cosmic storms seemingly targeting Federation worlds—unstoppable outbursts emitting from the very fabric of space. Endeavoring to predict where the lethal storms will strike next, Spock and Chekov make the shocking discovery that the answer lies in Commander Nyota Uhura’s past—one that she no longer remembers.

STAR TREK: THE NEXT GENERATION

THE SHADOWS HAVE OFFENDED

The USS Enterprise has been granted the simple but unavoidable honor of ferrying key guests to Betazed for a cultural ceremony. En route, sudden tragedy strikes a Federation science station on the isolated planet Kota, and Captain Jean-Luc Picard has no qualms sending William Riker, Data, and Chief Medical Officer Beverly Crusher to investigate. But what begins as routine assignments for the two parties soon descends into chaos: Picard, Worf, and Deanna Troi must grapple with a dangerous diplomatic crisis as historic artifacts are stolen in the middle of a high-profile ceremony…while nothing is as it seems on Kota. A mounting medical emergency coupled with the science station’s failing technology—and no hope of rescue—has Doctor Crusher racing against time to solve a disturbing mystery threatening the lives of all her colleagues.

Jadzia Dax has been a friend to Etom Prit, the Trill Trade Commissioner, over two lifetimes. When Etom visits Deep Space Nine with the request to rein in his wayward granddaughter Nemi, Dax can hardly say no. It seems like an easy assignment: visit a resort casino while on shore leave, and then bring her old friend Nemi home. But upon arrival, Dax finds Nemi has changed over the years in terrifying ways…and the pursuit of the truth will plunge Dax headlong into a century’s worth of secrets and lies!

ALSO RELEASED THIS YEAR – THE MYSTERIOUS ‘C’ TRILOGY (Updated thanks to new information discovered by The Trek Collective ).

There are a number of other upcoming titles from Gallery Books (Simon & Schuster), as discovered by Star Trek fan site Shastrix including a mystery ‘C’ trilogy, now revealed as a ‘Star Trek: Coda’ series from authors Dayton Ward, James Swallow & David Mack by The Trek Collective. These are Star Trek: Next Generation stories as revealed in the urls of the Simon & Schuster catalogue. Shastix also notes them as being set in the TNG movie era, potentially focusing on the aftermath of Nemesis, which would also make them prequels and tied into Star Trek: Picard’s storylines.

There is also one other Star Trek: Picard novel listed as upcoming, though with a rather bizarre release date of 2045. Simply listed as ‘Untitled STP‘ on a number of retailer sites, and digital catalogues, with are no other details. After the reveal of ‘Rogue Elements’ our bet would be another character study of one of Picard’s core cast perhaps. A ‘Seven and the Fenris Rangers’ backstory would certainly be high on our list of ideas!

Stay up to date with the latest novels such as ‘Rogue Elements’ and other releases by following us on our social media: