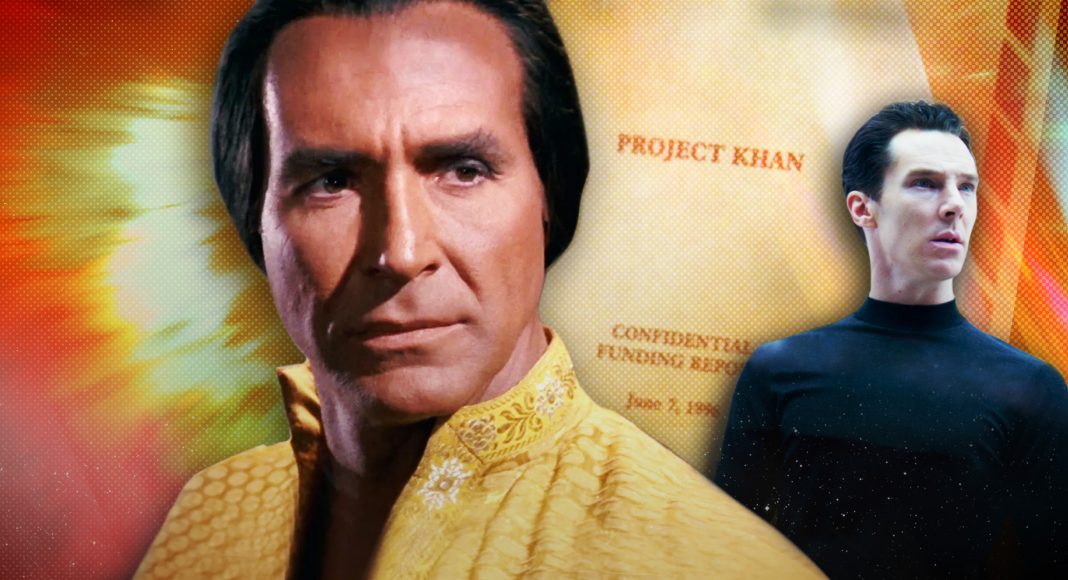 The idea of a Khan focused Star Trek series is not new. We’ve explored the legendary Star Trek villain a fair few times in the Star Trek Universe. Additionally, with the recent Star Trek: Picard Season 2 end, there was a subtle hint at something taking place in the Trek Universe, “Project Khan“. So, is there any evidence to suggest Khan is our next adventure?

Khan Noonien-Singh was the main villain of the highly-acclaimed 1982 film, Star Trek II: The Wrath of Khan. Additionally, the film’s director, Nicholas Meyer, has become something of a Star Trek Legend. However, very recently he has been more vocal about what could be Khan’s next adventure in the Star Trek Universe.

The last time we properly explored Khan was in the Kelvin film, Star Trek Into Darkness. Actor Benedict Cumberbatch took on the role of Khan in the alt-universe. However, Khan was previously played by Ricardo Montalban in both Star Trek: The Orginal Series and The Wrath of Khan.

While working on Paramount’s Star Trek: Discovery Season One, Nicholas Meyer developed another project. The mini-series was about Khan Noonien Singh, set on the planet of Ceti Alpha V. Additionally, the story would explain what happened to Khan between TOS and Star Trek II. However, this project has never taken off and according to Meyer, is just sitting there on the table.

Meyer has revealed that he has handed in his script for the Ceti Alpha V Star Trek series. However, after handing it in, he has never heard from anybody again. So is the project being developed, or has it just fallen into the void of Star Trek projects? Regardless, Nicholas Meyer has shared his ideas for the series online, so we can learn more about it.

Myer reveals that Alex Kurtzman spoke to him about the idea of what happened to Khan. However, following Meyer writing this story, he’s never heard anything again. Additionally, this was stated on April 8th 2022 via Twitter, as you can see below. This does occur before the reference to Khan popped up in Star Trek: Picard’s Season 2 Finale episode. Perhaps things might have changed now?

When Alex Kurtzman’s first deal with CBS, now paramount, was confirmed, the idea of a Khan series came up. According to Variety in 2021, a limited series based around the Wrath of Khan story was in the works. However, nothing has been said further about this. Additionally, at the time, CBS Television Studios declined to confirm specific projects.

However, at the time the Variety report did mention other details that were correct. Details such as an animated series, which would later become Star Trek: Lower Decks or Star Trek: Prodigy.

Khan has cropped up again very recently in the Star Trek Universe. However, he has not directly appeared, more so as a reference to him. At the end of Star Trek: Picard Season 2, disgraced scientist Adam Soong (Brent Spiner) reveals a connection. Soong opens his desk drawer to find a file called “Project Khan”, marked confidential and dated June 7 1996.

Of course, Project Khan is a codename of the 20th-century project to create augmented humans. It’s revealed in Picard that one of the scientists who worked on this project was Adam Soong himself. Project Khan resulted in the creation of individuals like Khan Noonien Singh. Additionally, this would go on to be one of the causes of the Eugenics Wars. A much referenced and talked about Star Trek event.

Has Star Trek: Picard just hinted at the next project? Is KHAN The Next Star Trek Series? This could be the case! We know that all the Star Trek shows talk to each other right now, so hinting at something could make sense. Additionally, let’s not forget that Star Trek: Discovery basically set up its next series of Star Trek: Strange New Worlds.

I’m betting that the Star Trek showrunners and creative team have something up their sleeves in regards to Khan. Additionally, Star Trek: Picard makes clear in a sense that something is going on with Project Khan. It is either a little cheeky reference or a sign something else is moving behind the scenes.

The new series of Star Trek: Strange New Worlds is also exploring augmented human beings perhaps? As an example, the new character of La’an Noonien Singh shares Khan’s name. However, does that make her his descendant, or perhaps related to the super-human in a sense? We’ll have to watch more of the series to know. But it does make you think that the Star Trek Showrunners are paying close attention to Khan’s legacy right now.