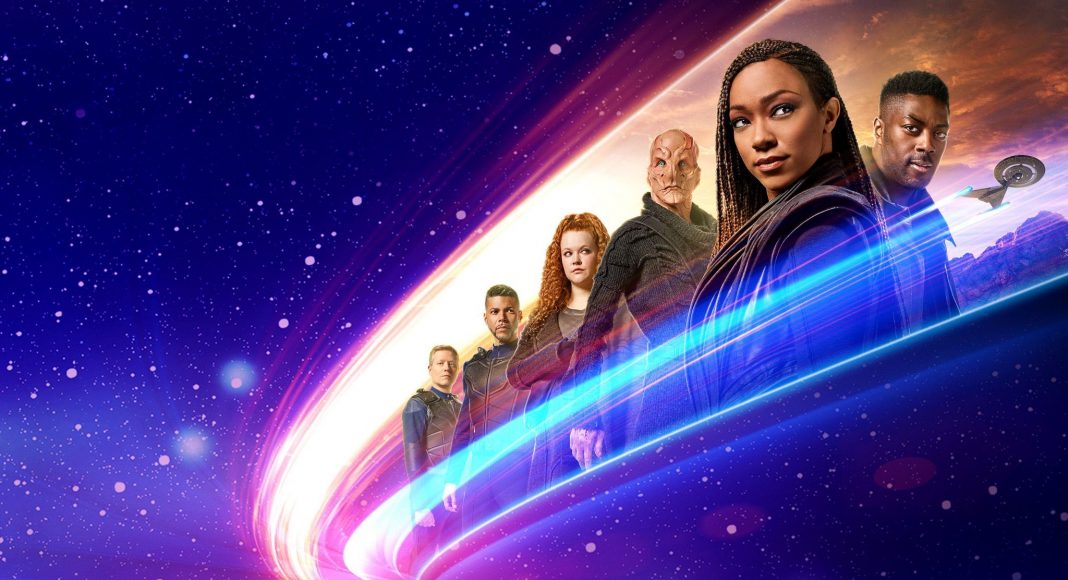 More details on what is waiting for us in Star Trek: Discovery Season 4.

Alex Kurtzman and Michelle Paradise gave a recent update via Deadline on what we can expect in Star Trek: Discovery Season 4, however, they have also been speaking to Blerdgurl Podcast in which they expand on a few more details.

The third season of Star Trek: Discovery has just ended, but the work on the new instalment of the show has already begun. TrekCentral is bringing you the latest updates on the journey of captain Michael Burnham and her crew. Including the insights from both the cast and the crew.

During the recent BlerdGurl podcast Alex Kurtzman and Olatunde Osunsanmi hinted on what are Saru’s next steps, now when he has left the Discovery. If you have been worried that beloved Kelpian will depart the show, fear not. Kurtzman explicitly stated Saru is coming back.

“Saru is definitely coming back, of course he’s coming back. But everybody is evolving in different ways, right? Like the journey for Burnham obviously was from the rejection of the captain’s chair to the sitting in the captain’s chair. And when you have those kinds of polarities, you know, you’re going to have something interesting in the season, because they’re as far apart as you could get. So, to get her from here to there, it’s going to be a journey. And Saru, who I think made an extraordinary captain, also began to recognize by the end of the season that he doesn’t necessarily have probably the hardest thing that a captain has to have, which is the willingness to be able to potentially sacrifice something you care for, or somebody you care for, to serve a greater good. And he doesn’t know where he is on the line yet. And that’s going to be part of what he gets to explore in season four. But we would never lose Doug [Jones]. Never.”

It is difficult to say what will be Saru’s role in the next season. Taking into consideration his diplomatic skills and his pacifist nature, it would not be surprising if Saru would play the role of a Federation ambassador in the coming season.

Discovery’s arrival in the 32nd century introduced the ship and crew to a much more different world than the one they left behind. The United Federation of Planets was only a shadow of its former greatness, still struggling with the aftermath of the century-old mystery event known as “the Burn”. The mystery was eventually resolved, and by the end of the season, the Federation is slowly starting to rebuild. According to Kurtzman, Discovery Season 4 is not only going to bring the member worlds back together. It will bring new planets into the fold as well.

“At the end of season three with the Federation, Humpty Dumpty really does kind of just come back together, but they have a long way to go. There’s still many, many species and planets that are not members of the Federation. So it’s an amazing first step in a brighter future. But ultimately, there’s a long way still left to go. Without spoiling anything, that’s a lot of what season four is going be about.”

What is in store for Michael Burnham?

The season ended with Michael Burnham getting the coveted captain’s chair. And this is just the beginning of the new journey for our hero. As a captain, we are going to see Burnham making some hard decisions during Discovery Season 4.

“Just because she’s in the chair doesn’t mean that there isn’t a journey about what it actually means to now experience things as a captain, and to have to make choices as a captain that you don’t have to make when you’re not the captain. The simplest and most obvious is, you as a first officer or as a science officer don’t have to choose whether or not to sacrifice someone on your crew to serve a greater good. That’s the hardest choice that a captain can make. Burnham, without revealing too much, and one of the things that [co-showrunner] Michelle [Paradise] and I have talked a lot about is that every episode needs to reflect a different challenge of what it means to be a captain. So the new variable for season four will be, ‘Okay, it’s a cool story, but how does it make her take a step as a captain?’ And that’s been a really interesting thing, because once we started filtering our stories through that question, it began to focus us on the kinds of stories that we wanted to tell. Because now they all have to challenge her as a captain.”

Kurtzman also provided some insight into creative thinking behind the decision to make Burnham a captain, perceiving it as natural progress in her character development.

“I think Burnham goes through this journey that’s very interesting over the course of three seasons. She’s been told to be a certain person by so many different people. First to her human parents then her Vulcan parents then to Starfleet… And what she really realizes at the end of season three is that she is chosen to be captain by Vance and by everybody because she’s two things. She doesn’t have to be one thing. None of us are ever only one thing. So I think Burnham at the end of season three learns to hold space for being two things, and that that’s okay. But that’s challenging as a captain when sometimes you actually do have to make choices that don’t allow you to make choices from both of those sides of yourself. So that’s a really interesting problem for her that I think that she’s going to have to go through.”

What is going to happen with Stamets and Book?

The two-parter that ended the season left us with an unresolved situation between Burnham and Stamets. Kurtzman did not provide the details on the nature of their relationship in season four. But we know that Stamets’ role as a spore-drive pilot will be re-examined.

“Stamets has carried this unique burden/gift, which is that he is the only one who can power the Discovery, and now somebody else can. So what does that mean? That’s another question that we will be covering.”

Cleveland “Book” Booker too, will play a significant role, now when he is an official member of the Discovery crew. Kurtzman hinted to the further development of Book’s relationship with Burnham.

“There will be interesting new challenges in [Michael’s] relationship with Book. Obviously they have a love story in season three and no good love story is really good without a lot of tests of that love. So she’ll be going through some of that too.”

Now, the only one question remains. How will Grudge react to such a development?

Trekking in time of the pandemic

Lastly, the duo addressed the issues with filming in the time of COVID-19. As is the case with any other film and tv production, Discovery is going to be affected by the new regulations.

“You start with safety first and the scientists, and then everything else kind of goes backwards from there. It goes to the scripts. And we’ve worked with Alex and Michelle, and say ‘You do this and the scientists are saying we shouldn’t do that’ Then once we get past that stage, we take it to the crew and start figuring out how to produce it. And then it just gets down to the nuts and bolts on set. We have to social distance, so that means when we do something called “last looks” when all the makeup, hair and costume people come in, now that’s separate. The costume people come in and go away, then hair comes in, goes away, then makeup. And obviously it takes three times as much time as it would normally take. And so you can take that process of individual departments, and multiply it across the entire company and things really slow down.”

We at TrekCentral are well aware of the dangers of the ongoing pandemic. We all want Star Trek: Discovery to return to the small screens as soon as possible. But we also want the best for the cast and crew. As Spock would say “The needs of the many outweigh the needs of the few.”

What is most important, is that Discovery will return with the fourth season, and we are sure that it will be worth a wait.