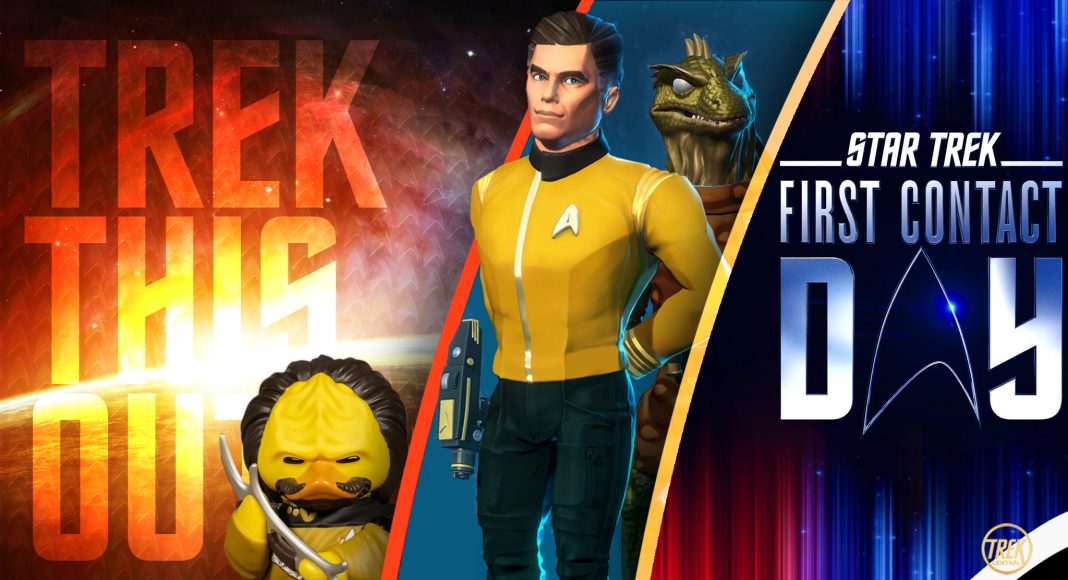 Lots to get excited about last week in Trekland, from the upcoming First Contact Day celebrations announcement, to the launch of the official Star Trek Podcast – The Pod Directive – season 2. Plus fun, new merch, more random Shatner Shenanigans, and new game Star Trek: Legends makes a surprise drop on the Apple Arcade. Let’s dive in and Trek it all out!

The big news of the week: celebrating First Contact day with some BIG announcements, plus panels and more. Of course we celebrate First Contact Day every year on April 5th, but this year we’ve got some added surprises! Check out the trailer below, and you can find our full schedule of panels and events…READ MORE

And fans got a great surprise to end the week and keep us amused over the Easter Weekend with new RPG Star Trek: Legends dropped into the Apple Arcade. The game is set in the Nexus, from Star Trek ‘Generations’ and includes characters from across the Star Trek Universe! Find out more HERE and check out our review…READ MORE

Star Trek’s official podcast The Pod Direct drops its first episode of season 2, with superfan Paul Scheer confessing his passionate appreciation for Star Trek II: The Wrath of Khan. You can listen to the entire episode below:

Star Trek HQ aka the Secret Hideout offices in LA is packed full of Trek-themed decor, from that huge graffiti wall, to a custom made ‘Triptych Flipbook’. Custom made for Alex Kurtzman, the flip transition from the original USS Enterprise, to the “Discoprise” variation, to USS Discovery. Check it out in the video above.

2021 mark’s Gene Roddenberry’s Centenary, with the legendary ‘Great Bird of the Galaxy’s 100th Birthday being marked by Roddenberry Entertainment. Headed up by Rod Roddenberry, son of Gene, there are year long ‘ThinkTrek’ initiatives including artists using lego builds to immortalise iconic moments from Star Trek…READ MORE

It may only be April, but Hallmark are getting a head of the game by bringing out more Star Trek: The Original Series themed Christmas decorations for the Holiday season. These include mirror Chekov & Spock (seems to be the theme this year, with Funko Mirror TOS figures recently released), to add to fans collections…READ MORE

From Numskull Designs, the company that delivered Star Trek The Original Series Kirk, Spock, Bones & Uhura as Rubber Ducks, ‘Tubbz’ are back with The Next Generation characters. Add to your collection with Picard, Deanna, Geordi and Worf duckies, because today is a good day to bathe!

No, he’s not taking ‘Kirk Fu’ to the next level with a new career in wrestling, but William Shatner is being inducted into the WWE Hall of fame. The actor will join the Celebrity wing on April 6th with a streamed ceremony…READ MORE

The DGA is to honor Star Trek concept artist John Eaves during the 25th annual ADG Awards, which will be presented during a free-to-view virtual ceremony on April 10…READ MORE

And finally, Trek Central’s Captain Jack steps in to the helm of The Earl Grey Pour Up, diving into the rumors of a delay for Star Trek Discovery Season 4. Also news about the impressive and fantastic Star Trek Voyager documentary that has raised over $1 Million USD in funding.