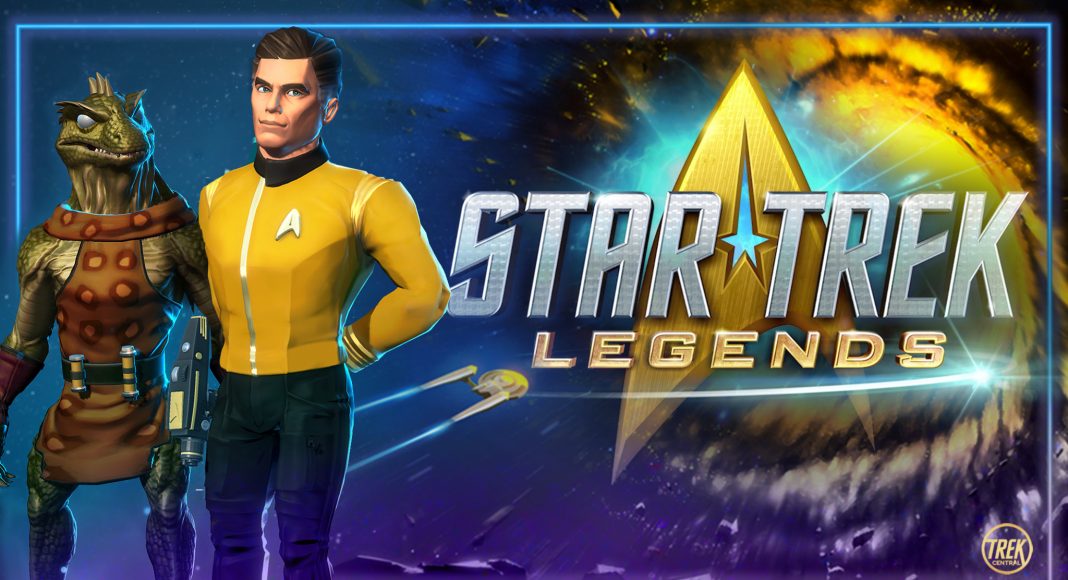 Legendary characters from across the Star Trek Universe feature in the new RPG Star Trek: Legends, but how good is the gameplay?

We’ve played it, and are loving it, so here is a look into this brand new Trek mobile game and how we found it!

The gameplay of Star Trek: Legends revolves around forming teams of 4 characters and fighting rival teams in turn-based combat. Each character on your team has different abilities you can use to achieve victory against your enemy.

The combat is surprisingly deep, and you don’t only have to defeat your enemy in one particular way. Instead of dealing enough damage to them, you can actually demoralise them into giving up, which is nice to see.

A lot of Trek games run into the issue of how to convey Trek action yet still have an interesting game without devolving into mindless violence, which I think Star Trek: Legends has been able to do. It isn’t as deep as it could be, but it walks a fine line.

The main part of the game is going through the main story, where you dispatch a group of 4 characters on a mission, where they have to overcome numerous challenges. From waves of enemies to obstacles where you have choices on how to overcome them.

For example, if you come across the door and have an engineer on your team, you may be able to open it, but if you have Worf on your team you also have the choice of simply destroying the door.

The gameplay is repetitive, so if you do not like the core gameplay of this game it is not for you. However, the variety of characters and their abilities do allow for interesting gameplay that does help to spice it up.

There is also a PVP mode; where you fight against other real peoples strongest units and climb up the rankings, as well as a “Alliance” mode which is essentially the guild system of this game, where you join guilds and take part in events

For a mobile game, it has a surprisingly engaging story. After the Nexus incident of 2371, seen in the movie Star Trek: Generations, Starfleet created the USS Artemis, a vessel that is capable of entering the Nexus and recovering all those that may be lost inside. This is basically the main way the story allows you to collect crew members from various different timelines in Star Trek, from Phlox in Enterprise all the way to Seven of Nine from Voyager!

The story follows you as the Captain of the USS Artemis, with your three main crew members of Michael Burnham, Dr. Leonard McCoy and Worf! A very interesting mix of characters you wouldn’t normally get, but the strongest part about this is the interactions between these three characters. McCoy wonders how Burnham knows Spock, whilst both McCoy and Burnham are surprised by Worf, a Klingon in Starfleet.

I won’t be spoiling the entire story for you, as it seems to not even be finished yet, but it delves into the mystery of the Nexus from Star Trek: Generations in a very interesting way, which makes you appreciate that movie much more, or at least I did.

I have enjoyed the main story, which makes sense as the story is written by notable Trek comic writer Mike Johnson, who recently wrote the great Star Trek: Picard – Countdown comic series which I also very much enjoyed.

I find that a lot of this recent ancillary content, from the books to this game, do a great job of expanding on the Pandora’s boxes opened by main Trek. Whether this is the recently introduced Mycelium Network established in Star Trek: Discovery being expanded extremely well in the book “Dead Endless” or the Nexus being expanded in this game.

One of the main comments both us and many others have had about this game is its art style, which is absolutely beautiful. Most of the Trek Mobile games go for a 2D realistic art style, as can be seen in Tilting Points previous game “Star Trek: Timelines”. As is obvious the art style is 3D but in a more cartoonish style.

All the Star Trek: Legends character models look amazing in this art style, and it is great we are getting Trek in more art styles officially compared to just live-action. Returning characters like William T. Riker and Deanna Troi worked extremely well translated into the Star Trek: Lower Decks art style and let’s hope we have the same for Kathryn Janeway in Star Trek: Prodigy.

I also should talk about the USS Artemis, NCC 0327. It is a really beautiful looking ship, yet still very original with an iconic saucer and two nacelles look to it. What is interesting and unique about it I guess is its deflector dish being on top of the saucer, and a smaller middle nacelle, which could be used for entering the Nexus? Whatever it is, the ship is a nice addition to Trek ships before it.

Star Trek: Legends is a game I have massively enjoyed and I definitely recommend it to anyone who is considering playing it. It does not have any of the problems I usually have with mobile games, namely microtransactions and stamina systems which limit how much you can play, and has a really interesting story behind it.

Without spoiling any of the story, this game has made me retroactively love Star Trek: Generations even more than I previously did, and that is high praise.

For systems like recruiting characters, it may still be random like most mobile gacha style games, but this game at least tells you the percentage chance of getting that rare character you are trying to recruit.

Hopefully, this game will allow for more in-depth Star Trek Role Playing games in the future, on other systems, which would just be great, as it is a space that has been vacant for quite some time.

Star Trek: Legends will be supported with future updates and events, so it will be fun to see what characters they bring into the game in the future. The game already has a great variety of characters, but the more the merrier!

Star Trek: Legends is now available on Apple Arcade via iPhone, iPad, Mac and Apple TV. If you’re new to Apple Arcade, there is a 1 month trial offer on sign up, followed by a £4.99 (UK) /$4.99 (US) monthly charge, or annual plans are available for £49.99/$49.99 plus one month free trial. You’ll also need the latest OS update on your devices.