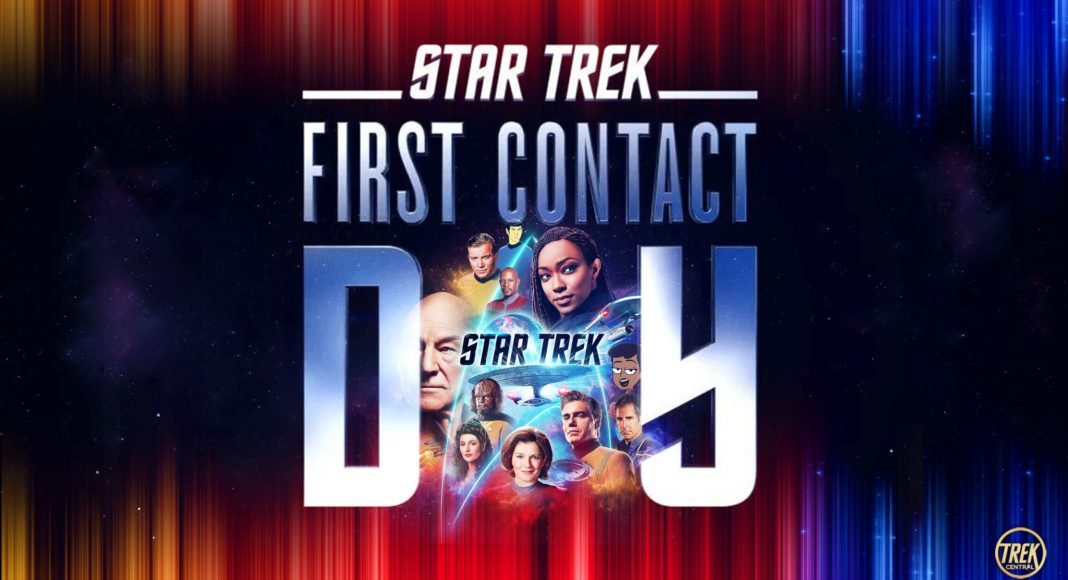 Monday 5th April sees the return of First Contact Day, a key date for fans of Star Trek to celebrate the franchise we love. Startrek.com today released a schedule of events to celebrate the day including panels and episode marathons.

As all Star Trek fans are probably aware, April 5th marks First Contact Day. For younger fans new to the franchise, I will just elaborate. In Star Trek lore in the year 2063, not long after a third world war has left the human race fractured, the scientist Zefram Cochrane breaks the light barrier and travels at warp speeds using a reconditioned nuclear missile, it’s during this light speed test that he attracts the attention of passing Vulcans, who make first contact with the human race. This first contact proves that we are not alone in the universe and ushers in the end of poverty, disease, and war. It is a pinnacle moment in Star Trek and offers a glimpse of what our future can be, which is why First Contact Day is so well celebrated in the fandom.

Over the years, the likes of Startrek.com and ViacomCBS and now Paramount+, have used First Contact Day to celebrate with the fans and this year is no different. With a whole host of panels lined up to revel in the day that includes a retrospective look back at Star Trek: First Contact, discussions on visual effects, humour-filled look at second contacts brought to you by Lower Decks creator Mike McMahan and Kevin and Dan Hagemen, joined by Kate Mulgrew, will also take us through the upcoming Star Trek: Prodigy. All in all, it should be a very good day for fans. Best of all, it’s all free AND will be hosted by regular panel hosts Wil Wheaton and Mica Burton.

Paramount+ invites fans from around the world to a virtual celebration of First Contact Day on Monday, April 5. As depicted in the film Star Trek: First Contact, April 5th, 2063 is the day that humans first make contact with Vulcans, marking a pivotal moment of exploration and acceptance in Star Trek history. The virtual event will honor and commemorate this future date by providing Star Trek fans exclusive programming, including themed panels with the cast and creatives from classic and current Star Trek television series and cast from Star Trek: First Contact, exclusive news from the Star Trek Universe on Paramount+, curated episode marathons, the return of the #StarTrekUnitedGives initiative and more. Additional information on free First Contact Day programming and initiatives can be accessed at StarTrek.com/FirstContact.

A special announcement and presentation by Sir Patrick Stewart

Featuring Star Trek: Discovery’s Sonequa Martin-Green, Star Trek: Picard’s Michelle Hurd and Isa Briones, and Star Trek: Lower Decks’ Dawnn Lewis as they look back at how Star Trek: The Original Series actress Nichelle Nichols helped pave the way for women of color on television and overall, her lasting impact on not only Star Trek, but science and culture.

Series executive producers Kevin and Dan Hageman are joined by Star Trek: Voyager’s Captain Kathryn Janeway herself, Kate Mulgrew, who is reprising her role in animated form in Prodigy, as they talk about the highly anticipated upcoming CG-animated kids series.

Paramount+ will also be streaming the best of first contacts episodes marathon.

The episodes featured during the marathon will be:

The streams will be free to view on StarTrek.com/FirstContact, Pluto TV and the Paramount+ Twitch page.

Finally, on a really positive note, as part of the First Contact Day celebrations, Paramount+ will be bringing back its #startrekunitedgives campaign which will see Paramount+ donate $1 for every tweet that bears the hashtag.