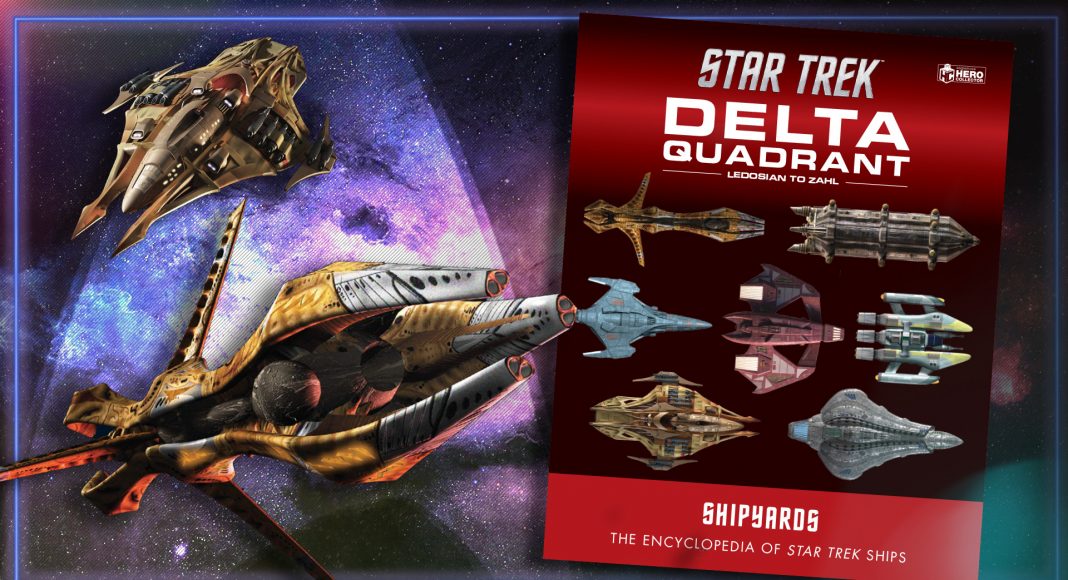 Hero Collector is back, rounding off the Star Trek delta quadrant ships in this Encyclopedia of Star Trek Ships, going from the polluting Ledosians all the way to friendly Zahl!

After their previous delta quadrant book looking at Star Trek Shipyards ships from the Draconian Akritirian to the time meddling Krenim, it was only a matter of time until they released the second volume that would detail the second half of the delta quadrant ships.

Voyager, compared to other trek series coming out at the time, had a greater reliance on CG models, than that of physical studio models. However, there are still examples of Physical studio models, as well as ship models from Matte Paintings. The foreword of this book even mentions that one of the ships they wanted to include, was simply a Matte painting in the show and there wasn’t enough detail to build a nice model for this book so it was not included.

These behind-the-scenes looks about how this book came together are fascinating, from finding ship files on ancient backups, to even thanking the analytical eyes of fans such as Jörg Hillebrand and the people over at Ex Astris Scientia. It’s a shame that we only get 2 pages of this behind-the-scenes look, with the rest of the book essentially recapping where we saw the ships.

Hero Collector does put out a lot of behind-the-scenes info with the design of ships with the booklets that come with their Star Trek Ship models, and it would be nice if there was a big collection of this info. But that is not what this book is trying to achieve and nor should it.

The book itself is filled with over 50 different species of ships, though what is really interesting with Voyager models is some of the reuse of ship models. This has been a thing since the original series, with a lot of the reuse of the USS Enterprise in place of ships like the USS Defiant. However in voyager ship reuse possibly stands out the most.

With Voyager being placed in the Delta Quadrant, it stands out when they reuse ships from the alpha quadrant, such as Romulan scout ships, to the smuggler ship “Unification I”. I can’t blame it on the book, however, and the book simply does a good job of showing us these models.

A couple of ships in this book go into more detail, like the fan-favorite Species 8472 bioship, with the book detailing the different components, which is always great for people who enjoy the technical specs of these alien ships.

As said, the images of the ships in this book are great, with some showing even different views of ships, so we can see all the small details on them. You do notice the difference in quality between models, with some still being the original CG models, to others having been updated for this very book.

The descriptions that follow the ships are interesting, but mostly help to remind you what happened with these ships in their respective episodes.

I can’t wait until we get similar books for the new shows, with one such book coming later this month. Voyager did a good job of showing us ship shots, but still had some obscured models. Especially in episodes like “The Void” where the whole premise was they are stuck in a dark space, so it was hard to see the ships, but the new shows make space much darker so seeing those models in good lighting will be good!

All in all, if you are a shipping nerd this is a must-have book. From highly detailed models of ships from Voyager to some more details about how these ships work and their components. It really helps to make these ships feel alive and an actual possibility. Voyager had a great many new ships, from the garbage scowing Malon to the Norcadian Arena ships for hosting Tsunkatse with an alien “The Rock”.

You can purchase the Delta Quadrant Shipyard book via the Hero Collector website, for the price of $34.99.