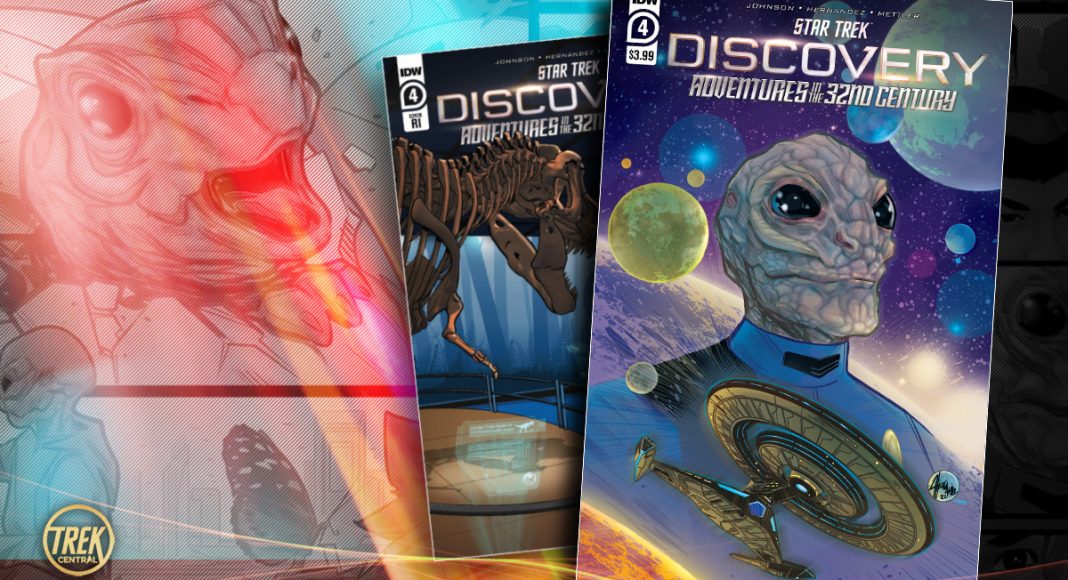 Ever since the crew of the Discovery journeyed to the 32nd century, the possibility for new stories has exploded in scope. Star Trek Discovery: Adventures in the 32nd Century #4 seeks to shine a spotlight on four of Discovery’s crew (including one cat) and their lives in this bold new future. The final issue of this series features Lieutenant Linus, a lesser featured character who usually serves as comic relief. But this story expands his character and gives him the opportunity to shine like never before.

We start the issue with a look into the evolutionary history of Linus’ species, the Saurians. Saurian is an apt name for his species as Saurians evolved from dinosaur-like creatures on Linus’ world. His world had a near-miss with an asteroid which allowed the dinosaurs to evolve into intelligent bipedal humanoids. Most species in Star Trek are suggested to have similar primate origins as humans so to see a completely different origin in a species is very refreshing.

We get to learn more about Linus through an inner monologue that carries us through the story. We learn that Linus feels isolated from the crew for being so different from the people he serves with. His hands are not designed for the ship’s technology, he’s prone to infection and his physiology grants him four hearts. This shame Linus feels for being different gives us more insight into his character than we’ve ever seen on the show. We take for granted that other species serve and thrive in Starfleet. We rarely take into account how it would feel to be the only one of your kind serving on a mostly human ship.

However, Linus’s differences ultimately lead him to save the day when an away mission goes wrong. A strange entity attacks all members of the crew, leading them to mass incapacitation. Linus is the only member of the crew to avoid the effects of the hostile entity. Only when Linus realizes what makes him different from the rest of the crew, specifically his four hearts, does he realize what can save them. Linus induces heart arrhythmia (a condition Linus suffers from) in all the crew to ward off the creatures and ultimately save the day. Captain Burnham commends Linus and for the first time he feels accepted.

This issue was an excellent conclusion to the Adventures series. It shed light on a lesser-explored character while telling a meaningful story about accepting yourself for who you are. The themes of the story blended perfectly with the plot of the story to create a memorable narrative. Hopefully, this series will continue in some form to keep exploring the personal side of Discovery’s crew.

Written by Kirsten Beyer and Mike Johnson, Star Trek: Discovery: Adventures In The 32nd Century #4 is out now! You’ll be able to find the comic at all good comic book stores, as well as online outlets for digital reading. Art is one again by veteran Star Trek comic book artist, Angle Hernandez.