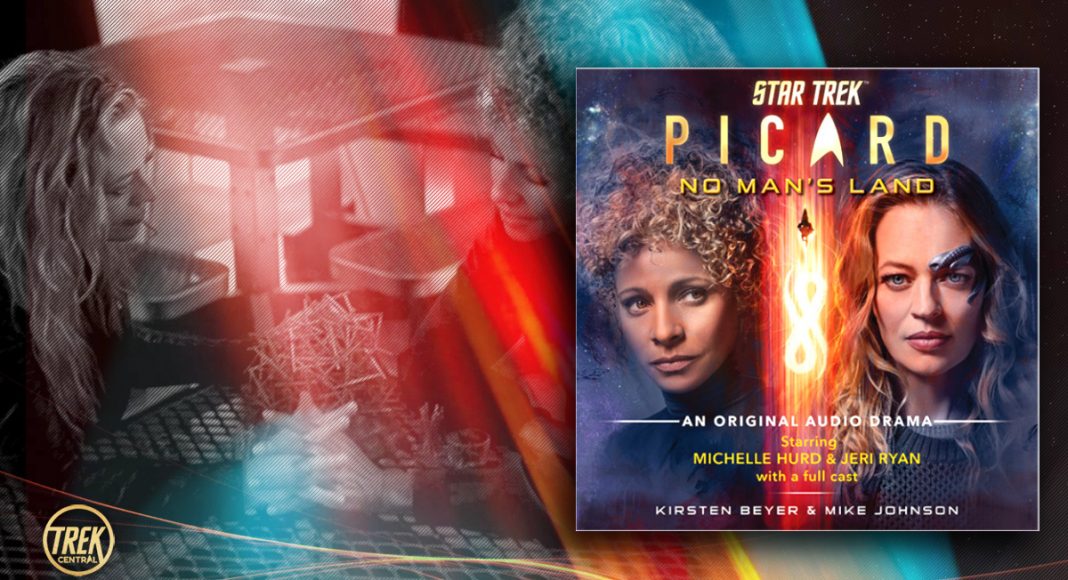 With less than two weeks until the premiere of the second season of Star Trek: Picard, the timing is perfect to release a brand new audio drama. A drama that bridges the gap between the first and second seasons. So warping in is Star Trek: Picard: No Man’s Land, which tells the tale of two of Jean-Luc Picard’s crew members in the show’s first season. Former Starfleet officer Raffi Musiker, and Star Trek Voyager’s Seven of Nine.

The audio drama is a writing collaboration of Mike Johnson, who has written Star Trek comics, and Kirsten Beyer, the co-creator of Star Trek: Picard and author of many Voyager-based novels. I’m happy to say that they have crafted a fun, engaging, and illuminating narrative that adds to the story.

No Man’s Land begins with Raffi and Seven on a vacation, trying to relax after Picard’s first season finale. Yet we quickly realize that this time off is designed for more than relaxation; Raffi and Seven are trying to get to know each other more. Last we saw them on screen, the two seemingly were beginning a romantic relationship onboard the La Sirena.

We pick up from that here, with the two of them flirtatiously discovering more about each other. If you were hoping for more Raffi and Seven relationship development, then No Man’s Land is a story for you. While the story contains an action-adventure mission, at its core, this is a story about Raffi and Seven. The story as a whole works best when it leans into exploring these two characters and why they are increasingly attracted to one another.

Raffi and Seven’s vacation doesn’t last long before it is interrupted by Hiro, another member of the Fenris Rangers. He petitions Seven to help him in his mission finding a renegade Romulan named Rinan. A Romulan who wants to rebuild the Romulan Star Empire. As a result, Raffi joins Seven in her latest mission. Given that this audio drama only runs about an hour and a half, I don’t want to give away too many details or spoilers. But suffice to say, I enjoyed learning more about what the Fenris Rangers do, and why.

The lore about Fenris develops here on the introduction to this group in Picard’s first season. While their organization and methodology is chaotic, their mission is singular: to help those who are seemingly helpless. We learn that one of Seven’s many missions before the Romulan star went supernova was transporting cultural and societal artifacts to new worlds so that they could be preserved. All of this sheds light on the magnitude of the Romulan resettlement. I got a lot of Maquis vibes after learning more about the Fenris Rangers, and for me, that is something to be praised.

The mission itself plays out just fine. As I alluded to earlier, however, what makes it all captivating is the presence of Raffi and Seven in the mix of it all. Both of them have a history around the Romulan relocation efforts. Raffi’s was formal and organizational. She was Picard’s chief lieutenant for Starfleet’s efforts to assist the Romulans.  Seven was on the other end of this cataclysmic event. She entered into the chaos and tried to bring structure where there was lawlessness. Both of them still carry the wounds of all of their efforts. You can hear the pain in both of their voices.

Jeri Ryan and Michelle Hurd are natural in their roles. This may sound obvious, but recording for an audio drama is much different than acting onscreen. Each embodies their characters with their voice. There’s so much nuance in the vacillating emotions of connection and separation, love and hesitation. Raffi and Seven are two distrusting people, skeptical of the forces around them. This makes for a captivating narrative that finds them wanting to be vulnerable with each other. They find love with each other, only to fall back to some withdrawn behaviors that have helped them survive. In the end, though, they wind up together, knowing full well that life together is far better than life alone.

While light is shed on their history with the Romulan crisis, the Seven and Raffi we experience in No Man’s Land are very much the present version of these characters seen in Picard. While we as a Trek audience are still getting to know Raffi, we know a lot about Seven after her four seasons of Voyager. If fans are hoping for more of the Seven we saw on Voyager, they’ll need to look elsewhere. This story continues to trajectory that we saw Seven on in Picard. She’s more human. She knows herself, but she is clearly still discovering who she is and what she wants.

I enjoy this, as it would be a shame to see Seven in the same place that she was twenty years ago. It should be all of our hope that characters grow. And Seven certainly has. Whereas she was the one being saved onboard Voyager, she now plays the role of the savior in the tumultuous areas of the Beta quadrant. If there’s a criticism I have, it’s that I was hoping for more of a backstory on Seven’s life between Voyager and Picard — hoping that we would learn more about why she associated herself with Fenris, and distanced herself from Starfleet. That’s a hope I will continue to carry as we enter into the next two seasons of Picard.

If there’s one thing that didn’t entirely succeed in No Man’s Land, it was the main mission and the villain of this story. The mission itself was wrapped up in a mystery that was fairly elementary, and the villain, Rinan, was not altogether captivating. It’s more of the basic Romulan villain trope that Trek has put out before. Yet this element doesn’t overwhelm the drama. It’s very much the B-story here and doesn’t detract from the overwhelmingly engaging personal story that Raffi and Seven are involved in. I likewise didn’t care for the cursing that is spattered throughout the story.

I have no qualms with cursing. It doesn’t bother me or offend me. It does feel out of place here, much as it did in the times it was used in Picard’s first season. This is a minor quibble, of course, but in an audio drama, everything is conveyed verbally, so these language choices did feel like bumps in the road in an effort to be edgy rather than something the character would say naturally.

I likewise want to praise the sound design of this audio drama. Many of the effects are lifted from the shows, which helps the listener visualize the setting of the story. Sounds are applied naturally and effectively. It enhanced my experience.

I think No Man’s Land stands as a great standalone story that adds layers to two principal characters of Picard. Outside a few references and deep cuts to Voyager and a couple verbal cues to Picard’s first season, there isn’t a lot of Trek canon in play here. The story also leaves open the exact passage of time between these events and Picard’s first season finale. Likewise between No Man’s Land and the start of events in Picard’s second season premiere.

However, No Man’s Land ends with a fulfilled promise that is ultimately a tease. Seven gets a new ship from Picard. This was promised in the first season of the show when Seven’s ship is destroyed while saving the La Sirena. But Raffi alludes to someone other than Picard being the source of said ship. We are left wondering who that is, we’ll find out soon enough in the next season of Star Trek: Picard.