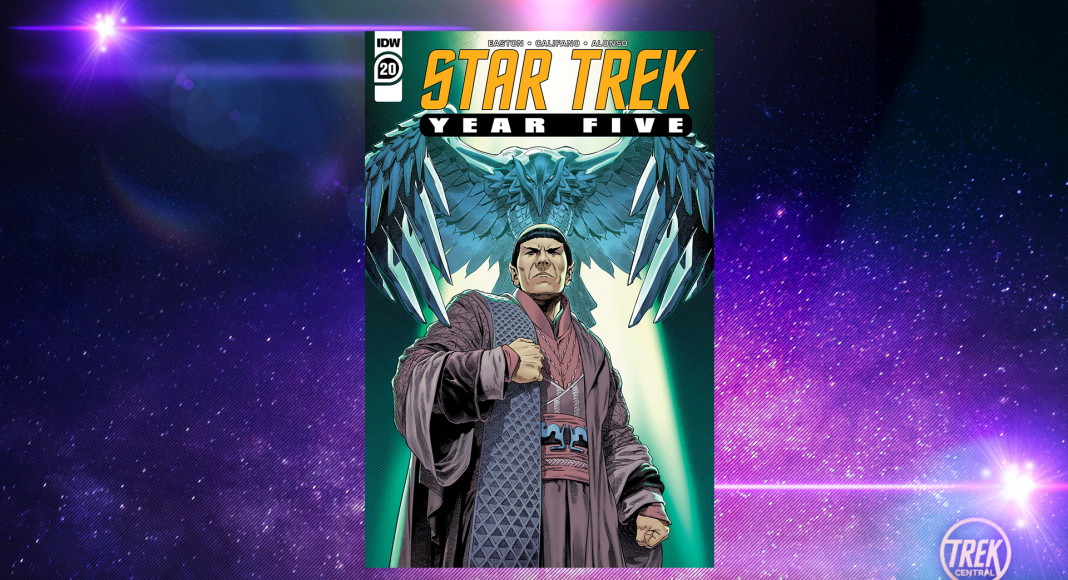 IDW’s Star Trek: Year Five returns with issue 20 and one of its most compelling stories yet.

Still on their way home from their five-year mission, the Enterprise makes a detour to Vulcan to investigate a strange signal emanating from the planet. What ensues is one of the most interesting time travel stories we have yet seen on Star Trek. One that has implications on the past, as well as the future.

With the 25th anniversary of Star Trek: First Contact upon us, it is either intentional or a lucky coincidence that Year Five tackles a First Contact-esque story in this week’s issue. After investigating this mysterious signal on Vulcan, Spock is sent back in time to the origin of modern Vulcan culture, to when the logical Vulcan’s split off from the emotional Romulans. This event is a defining moment in Vulcan history, equally as important as when humans made first contact with the Vulcans.

However, Spock quickly discovers that the events of his own history happened quite differently than he was taught. Surak, the Jesus-like figure that supposedly enlightened the Vulcan people, turns out to be a bellicose conqueror who subjugates anyone who doesn’t follow his teachings. This causes a conflict of identity in Spock, as he realizes the culture which he is so proud of is bathed in blood. This evokes similar themes to First Contact, when the crew of the Enterprise discovers that Zefram Cochrane was a scared, lazy, drunk, and not the heroic figure they thought they knew.

Spock learns to empathize with the Romulans, who reject Surak’s teachings and take pride in their emotions. This is quite a different perspective than what both Spock and the audience have grown to know about Vulcan history, that they were supposedly a savage and barbaric people that were saved by the power of logic. Spock reflects on the human adage “History is written by the victors” when he realizes that the events of the Vulcan’s salvation have been greatly sugar-coated.

Later in the issue, Spock goes on a covert mission with two of the Romulans to steal the Stone of Gol, a powerful psionic weapon that can be used to stop Surak. This is an interesting callback to The Next Generation episode, “Gambit”, in which Picard infiltrates a group of mercenaries tasked with finding the pieces of the ancient weapon. It is rare that TNG and The Original series crossover due to their different time periods, but this was a clever way to connect the two timelines.

After Spock and the Romulans steal the stone, it was revealed to be a ruse by Surak himself. Surak tricks one of the Romulans into using the power of the stone on herself, killing her instantly. Not being able to standby and watch Surak continue on his conquet, he gives him the classic Vulcan neck pinch and renders him unconscious. Like First Contact, this immediately has drastic effects on the future. The Enterprise is attacked by starships that look like a cross between Vulcan and Romulan designs. Perhaps by taking out Surak, the Vulcans and Romulans never split up and continued on to create one unified society.

Spock claims that “…it is only logical to preserve life,” as his reasoning for knowingly altering the timeline. But it would also be logical that altering the timeline would create a paradox that would put his own life and the future of the universe at stake. This seems to be an emotionally driven decision rather than a logical one, although Spock claims otherwise. For it is not logical to preserve life when the needs of the many outways the needs of the few, at least in Spock’s mind.

How will Spock undo the damage he’s done to the timeline? Will he have to take Surak’s place and lead the Vulcan movement, becoming a part of his own history. We have seen this plot playout before when Captain Sisko became Gabriel Bell in the Deep Space Nine episode, “Past Tense.” No matter what happens, all will be revealed in the next issue!

As the crew of the Enterprise moves toward an uncertain future, one of their own will be pulled into a violent past! While investigating a mysterious structure on Vulcan, Spock vanishes. As the crew tries to find him, Spock must fight to survive as he navigates the painful past of his home planet. The final voyages of the original crew continue in this time-hoping adventure from writer Brandon Easton (Transformers: War for Cybertron, Thundercats) and artist Silvia Califano (Star Trek: Year Five, X-Files: Case Files)