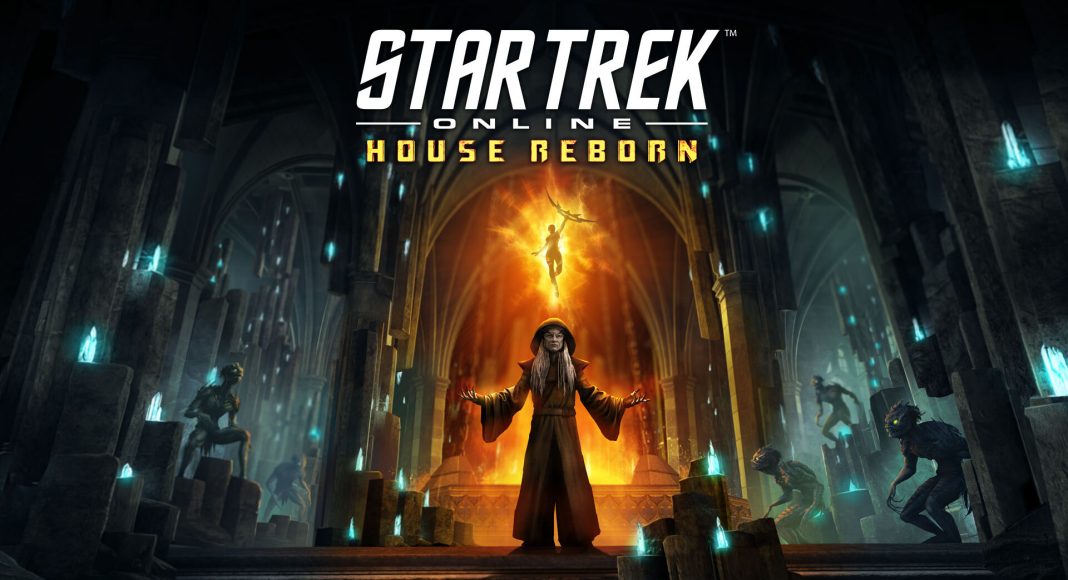 The ever-popular online MMORPG Star Trek: Online celebrates its 11th year by releasing its latest season, ‘House Reborn’ in which captains will learn what it means to be a true Klingon…

‘House Reborn’ follows in the footsteps of ‘House Divided’ and ‘House Shattered’ and will be the beginning of the closing arc in Star Trek: Online’s epic Klingon war saga. The free DLC which is available today will feature brand new content and the voice talents of Mary Chieffo, Sam Witwer (who you may recognize as the voice of Star Wars Darth Maul) and Robert O’Reilly.

“After the Klingon Empire broke apart in House Shattered, J’Ula, matriarch of House Mo’Kai, travels to the sacred planet of Boreth. Plagued with guilt, she tracks down Tenavik (voiced by Sam Witwer from Star Wars: The Clone Wars, under the guidance of Kenneth Mitchell, who originated the role), the Klingon outcast who was first introduced in Star Trek: Discovery, with hopes that he can lead her to enlightenment. The journey won’t be an easy one, however. Players will be tasked with guiding J’Ula along her spiritual voyage, one where she will not only have to face ghosts of the past, present and future, but also descend into the pits of the Klingon underworld Gre’thor itself. There she will seek guidance from L’Rell, the famed Klingon warrior who played a pivotal role in the first few seasons of Discovery (voiced by Mary Chieffo, who originated the role). Captains will also reunite with General Martok (played by J.G Hertzler from Deep Space: Nine), Adet’Pa (voiced by Rekha Sharma from Star Trek: Discovery) and Aakar (played by Robert O’Reilly from Star Trek: The Next Generation and Star Trek: Deep Space Nine”

Two Brand New Episodes – In “Knowledge is Power,” Captains will play as J’Ula and return to the sacred planet, Boreth to seek guidance from Tenavik, before heading to Gre’thor to seek out guidance from L’Rell in “Leap of Faith.”

Klingon Recruitment System – Players who start a new Klingon Captain will now earn several rewards for all Captains on their account.

Anniversary Event – Captains will be able to explore numerous episodes, patrols, and TFOs associated with the Klingon Civil War, and earn a new Alliance Klingon Bird of Prey.

Cross-Faction Flying – For the first time ever, Federation Captains will have the ability to command Klingon Ships and Klingon Captains can command Federation ships. To unlock this feature, players will need a Klingon character who has reached level 65.

Free Discovery Uniform – To celebrate Star Trek Online’s 11th anniversary, all PC captains will be able to claim a free uniform from Star Trek: Discovery for a limited time.

On the celebration of Star Trek: Online’s 11th year, CEO of Perfect World Entertainment Yoon Im says “It is truly amazing to witness how Star Trek Online continues to resonate with people after 11 years. The Cryptic Studios team is incredibly passionate about Star Trek and has done a tremendous job of bringing the films and shows to life in the game. We could not be more thrilled to celebrate this milestone with them and our devoted players.”

And Executive Producer Andre Emerson echos this feeling by adding “We feel so honoured to be on this journey after 11 years, Each new year brings more Star Trek content than ever before and we feel like we’re just getting started. None of this would even be possible without the constant support from our players, and we would like to thank them dearly for it.”

‘House Reborn’ is currently available for PC and will be made available to console players at a later date.

Star Trek Online is a free-to-play massively multiplayer online game that allows players to explore the Star Trek universe from within. Players can forge their own destiny as Captain of a Federation starship, champion the Empire through the far reaches of the galaxy as a Klingon Warrior, rebuild the Romulan legacy as the commander of a Romulan Republic Warbird or carry out daring missions on behalf of the Dominion as a Jem’Hadar soldier. Captains can also explore iconic locations from the Star Trek universe, make contact with new alien species and battle alongside other players in customizable starships. Star Trek Online is currently available on PC, PlayStation®4 and Xbox One.

Will you be downloading ‘House Reborn’? Let us know your thoughts by joining our Star Trek: Online discussion group found on our Discord server, click the link below: