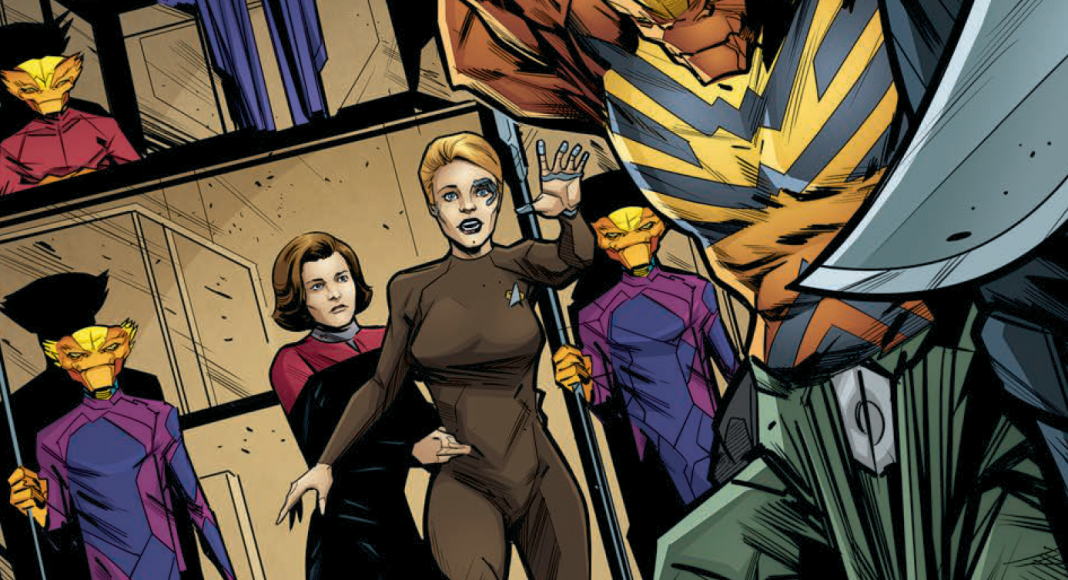 The final issue of the miniseries is here. What becomes of Seven and the Vesh? Spoiler warning ahead for ‘Seven’s Reckoning’ issue 4.

Freedom has a price. A lesson that Seven of Nine learned all too clearly throughout the events of IDW’s ‘Seven’s Reckoning’. Seven’s premiere comic series concluded this week with a fourth and final issue that wrapped up its morality play with Seven as its star. Seven had to navigate the dangerous politics of the Ohrdi’nadar, a species divided into two subspecies, the superior Kz’ar and the subordinate Vesh, as she helped them repair their warp core. The story came to a literal explosive cliffhanger at the end of last issue when Seven helped the Vesh lead an uprising against their Kz’ar masters. Now, we pick up the pieces from that incident and warp into the final chapter.

We open the issue with Seven recovering in sickbay. The Doctor helps repair Seven’s ocular implant while Captain Janeway and Tuvok watch with a critical eye. Janeway reprimands Seven for interfering with the natural progression of the Ohrdi’nadar, reminding her of her duty to uphold the Prime Directive. However, Seven calls out Janeway on her hypocrisy for refusing to interfere. We as the audience know that Janeway has broken the Prime Directive many times, choosing to acknowledge it sometimes and ignore it on others. Although Janeway is stunned by Seven’s conviction, she holds true to her decision to stay neutral.

Back aboard the Ohrdi’nadar ship, Seven and the leader of the Vesh uprising, Greeb, finish the repairs to the warp drive. Seven learns that the leader of the Kz’ar, Septa, struck a deal with the Vesh to grant them amnesty as long as they finish the repairs. However, Septa alters the deal and announces that a trial must be held for Greeb’s crimes against the Kz’ar, where he is quickly sentenced to death, without a defense. This quick prosecution is reminiscent of Cardassian trials in which the sentence is determined before the trial actually happens. Seven tries to speak up for Greeb and is offered a brief audience with Septa.

Seven tries to bargain for Greeb’s life and asks Septa to let him leave aboard Voyager. However, Septa refuses saying that Greeb’s story must end in death, in “real defeat.” Ohrdi’nadar culture is based around the idea that they are all living out a narrative that takes place in real time. Septa wants the climax of Greeb’s story to be death, so that their race can move on and the grand narrative can continue without his involvement.

Not seeing what the outcome is, we then cut to Janeway and Seven as they look out at the Ohrdi’nadar ship. Seven continues to question the point of the Prime Directive, calling it “amoral.” Janeway counters by saying that Seven must find the middle ground between interference and non-interference, and knowing when to use each policy. While she may not like it, Janeway says upholding the Prime Directive is what will “shepherd us in our darkest hours.”

Seven is then caught in a moral dilemma. On the one hand, she feels that Voyager should have interfered and helped the Vesh revolt against the Kz’ar. On the other, if she had never interfered, Greeb would most likely still be alive along with the other Vesh who were killed in the uprising. Janeway acknowledges Seven’s inner conflict, calling it decidedly “human.”

With that ‘Seven’s Reckoning’ comes to a quiet close. While it would have been nice to see the eventual fate of the Ohrdi’nadar, it seems fitting that we, like our characters, are left wondering. Seven left her mark on the Ohrdi’nadar, but they must now choose their own fate. Will Greeb’s death act as a spark for a full blown Vesh rebellion? Or will they continue to be subjugated for the rest of time? Whatever the outcome, we know that they are forever changed by Seven’s actions.

An episode of Star Trek with a strong moral quandary as its centerpiece are some of the best episodes of the show. ‘Seven’s Reckoning’did a fantastic job capturing that aspect and making it its own. Testing the morality of Seven of Nine, a character who is only just discovering what morality is, was a perfect character to showcase the grey areas of the Prime Directive and Voyager’s peculiar role in the Delta Quadrant. It is difficult to say what Seven or Voyager should have done in this situation, but that is the beauty of the moral quandary. Arguments can be made for both sides and it is up to us to decide what we would have done if we were in their shoes.

The introduction of the Ohrdi’nadar species was very interesting as well. As mentioned before, their culture is based around the idea that their lives are all intertwined in a massive story. There are protagonists, antagonists, character arcs, and dialogues. This is a unique take on the concept of fate and predestination that has not been seen in Star Trek before. Many species are followers of religions that believe in these kinds of ideas, but none have examined them through the lens of a story with classical story structure. While it is unlikely we will ever see the Ohrdi’nadar again, it should be acknowledged that ‘Seven’s Reckoning’managed to create an original Star Trek species in a canon of hundreds.

While it is disappointing that we did not get to see much more of the crew besides Seven and Janeway, this was always Seven’s journey. With the resurgence of Seven of Nine’s popularity to Star Trek: Picard, this comic was a great return to form for Seven to see her in prime, doing what she does best: navigating her humanity and helping others along the way.

Check out our reviews of the previous issues by clicking the links below:

Are you a fan of this series? Let us know your opinions via our social media platforms and get involved.