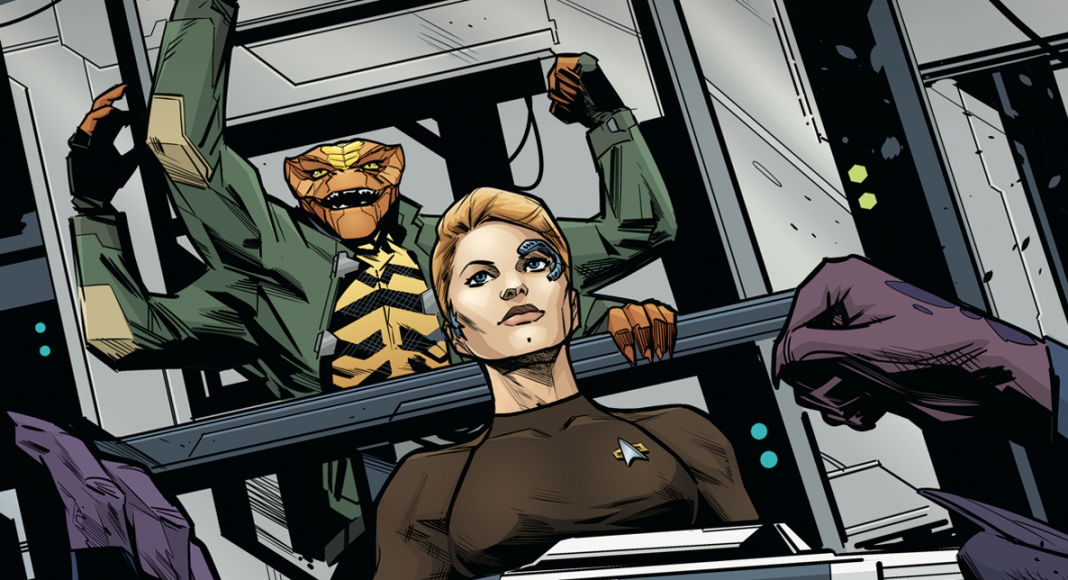 What has gone from a long-simmering conflict has exploded into all-out war. Seven of Nine has chosen her side, but even with her help, victory is not assured, and what will it mean for her place in the crew of Voyager when the dust finally settles? ‘Seven’s Reckoning‘ is an all-new adventure set during Voyager‘s amazing fourth season from writer Dave Baker (Action Hospital, F*ck Off Squad, Star Trek: Waypoint) and artist Angel Hernández (Star Trek: Picard – Countdown, Star Trek/Green Lantern).

Riot. Revolution. Uprising. Insurrection. These are the themes that have permeated the culture of the United States due to the recent protest turned riot at the United States Capitol. A group of rioters stormed the physical embodiment of American democracy in an effort to thwart a free and fair election. The mob assaulted the capitol because they were told a story. A narrative that they were disenfranchised, lied to and forgotten by the U.S. government. The story of a fraudulent election caused them to act recklessly and dangerously, resorting to violence.

While IDW’s ‘Seven’s Reckoning’ #3 was conceived long before the events of January 6th, 2020, it is perhaps fate that this issue was released at such a historic moment in time. Star Trek often reflects the society in which it is created, and ‘Seven’s Reckoning’ is no different. In this series, we follow the story of Seven of Nine, the recent Borg drone turned human as she navigates a conflict between the ruling Kz’ar, and the subservient Vesh. The events of the previous issues revealed that a conflict was brewing between the two groups, that was at any moment going to lead to a Vesh uprising. In issue three, we see the result of the pot boiling over.

‘Seven’s Reckoning’ #3 begins with a violent conflict between Vesh and Kz’ar, one that brings chaos and bloodshed. The imagery is eerily similar to the conflict between the capitol rioters and police. The conflict is interrupted by the leader of the Kz’ar and master of the Vesh, who demands that the Vesh stand down their uprising. She invokes the story of the Dawn Bringer, an ancient Kz’ar revolutionary who the Vesh aspire to reincarnate in their own revolution. But she says that this idea will never come to fruition since the Dawn Bringer was a Kz’ar, not a Vesh.

Despite her efforts for peace, the Vesh cannot hear her, for they are too caught up in the narrative that they are meant to rise up and defeat their oppressors. They cannot see any other reality because they are too engrossed in the story, just like many of the capitol rioters who were caught up in the excitement of playing a central role in the narrative that was told to them. The revolution’s leader, Greeb, later admits that he was carried away by the story and that he viewed himself as the protagonist. But he sees the error of his ways once he acknowledges that he and his kind are powerless to stop the Vesh.

The story of the Vesh and Kz’ar is soon shattered. Seven helps Greeb discover that the Dawn Bringer was not in fact a Kz’ar, but a Vesh. It’s in this moment, Greeb realizes that his entire existence has been a lie. A lie propagated by the leader of the Kz’ar. He’s not the protagonist in his own story, but instead a background character in someone else’s. The Kz’ar have used this story to manipulate the Vesh and keep them in a life of servitude. It is only when Greeb realizes that he is being manipulated that he can truly take charge of his life.

However, when Greeb and Seven hurry back to tell the other revolutionaries of the revelations they have discovered, it is too late. The issue ends with a final panel of a massive explosion that knocks everyone back, including Seven. The Kz’ar strike fast and hard in an attempt to quell the revolution before it can truly begin.

The Kz’ar will do anything to stop the Vesh from finding out the truth about their past. For once they learn the truth, they will never accept being subservient again. The Kz’ar are desperate to maintain their power and they will go to any length to maintain it, even if it leads to violence.

While all hope seems lost for the Vesh, the truth will eventually save them. They will learn that they have been manipulated, misused, and misguided by a nefarious force. With only one issue left, it is likely they will discover the truth soon.

Stories shape our society. They influence our thoughts, actions, and cultural understandings. Star Trek has shaped and influenced scientists, politicians, explorers, social workers, and countless others who change the world in meaningful ways. Storytellers have a responsibility and a duty to use their powers for good, not for control or power. For a good story has the potential to create, but also destroy.

Let us know your thoughts on issue 3 of ‘Seven’s Reckoning’ by joining the discussion on one of our social media forums: