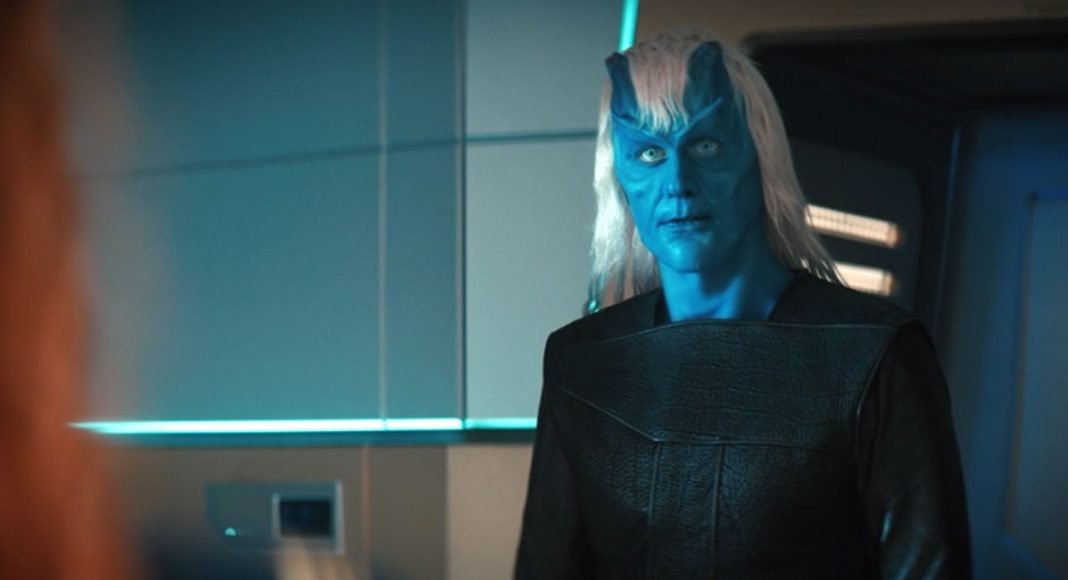 Noah Averbach-Katz was introduced during the 6th episode of season three of Star Trek: Discovery as the character Ryn; a former member of the Emerald Chain, he was condemned to the salvage yards on Hunhau and worked as slave labor following the events of a failed coup. As punishment his antennae were hacked off and he went on to be treated as a pariah by his fellow captives and the Chain itself. Originally auditioning for the role of Spock for Discovery’s second season, the boyhood Star Trek fan finally lived the dream of us all, by securing the role of Ryn.

Growing up Fairfax, Los Angeles, Noah Averbach-Katz was a huge Star Trek fan and often visited conventions with his mother and participate in ‘Star Trek Parties’ at home with his family. While Voyager was on TV screens at the time, Noah was hooked on another incarnation of the franchise which went on to become his favorite show “Definitely Enterprise”.  As a huge fan of the franchise, going from watching to experience was a potentially daunting task.

“I think one of things I was most worried about was if I got on set, and I had a miserable time, like if it wasn’t fun to make, if it wasn’t actually the experience that I spent basically my whole life dreaming about. But it turned out that it was even better than I could have imagined. It was so much fun, it all felt so ‘real’, everyone was so nice and patient and excited for me. So, I think the best part was that it not only matched but actually exceeded my fanboy expectations.” As well as appearing in your favourite show, the chance to meet a legend of the franchise is equally as overwhelming. “I got to be directed by Johnathan Frakes, and all I could think about leading up to it was ‘Don’t meet your hero’s. But thankfully I had an incredible time – including working with Johnathan – and I sort of had the opposite experience, where it completely re-invigorated my love for Star Trek”.

As an Original Series man myself, I have always imagined what it would be like to walk out onto the bridge of the USS Enterprise, the opportunity to sit in the captains chair and experience, even for a brief second, what it might be like to actually be in Starfleet. For Noah Averbach-Katz, the experience was unreal.

“My first day on set was shooting the end of S3E06 where I just lay in a Sick bay bed. I was so excited to get to be in sick bay and have one of silvery space blankets over me that I couldn’t stop smiling and Sonequa (very lovingly) had to tell me to close my eye, stop smiling, and act like I was unconscious so they could actually shoot the scene”.

In such a short space of time and with only three-episode appearances, the fanbase has really taken to Noah Averbach-Katz and his character. It’s not surprising giving his approachable nature and how well he portrayed Ryn. But how does that feel to be embraced so much by the fans given the limited time on the show?

“Truly amazing. I can’t tell you how much it means to me. As a fan, to have the fan community be so warm, and excited and welcoming to me…It just means the world to me. For me this wasn’t just a fun TV job or a cool thing I got to do, it was really a capstone experience for both me personally and for my family – and part of that experience is getting to interact with the fans in the ways you always dream about – sharing BTS, answering questions, just really getting to be a part of everything. It’s meant the world to me and to my family the way I’ve been embraced”.

For those of you who may not be aware, Noah Averbach-Katz is the husband of Mary Wiseman who plays Tilly on Star Trek: Discovery. They have been together since 2013, Noah even played a little part in Mary Wiseman getting the role of Tilly, by utilizing his knowledge of the franchise and helping her through the audition process. So, was it roles reversed when it came to Noah’s audition and has he had any input into the development of Ensign Tilly?

“She was so excited for me!” Noah says when Mary learned that he had won the part. “I think her advice to me was to calm down and not to freak out. It was so easy for me to get overwhelmed thinking about what I was actually doing, she really reminded me to stay grounded and don’t forget to focus and the acting and how I fit into and support the overall story”. And speaking of his help with Tilly Noah says “Tilly is all Mary’s, but I could give her a window into what this show means to people and why. I think having that in mind, that this show can really reach out and touch people in a profound way, helped those long days on set or doing endless press feel just a little more manageable”.

With a partner working on the show that he loved, how easy was it to avoid spoilers?

“In season 1 I would make Mary tell me EVERYTHING. She was so tried (the days are incredibly long and exhausting) that I just started reading the scripts instead…But I actually found that knowing everything made watching the show way less fun, so now I don’t have her tell me much of anything so that way I can watch each week as a total fan, which is so much more fun for me”.

Well, I think if we were all in the same boat, we would have done the same thing. I know I would.

Although Ryn is only on Discovery for three episodes he actually experiences a small but satisfying story arc. Initially an outcast, mistrusted and alienated with only Cleveland Booker to count amongst his allies. Rescued by Burnham and Georgiou, he assists the Discovery crew in freeing the slaves of the shipyard and plays an important role in the fightback against Osyraa and the Emerald Chain, ultimately dying in the process. Its classic story of redemption that is played out over the ‘Ryn Trilogy’ of episodes, ‘Scavengers’, ‘The Sanctuary’ and ‘There is a Tide’. Initially, Noah Averbach-Katz wasn’t even sure if the role of Ryn was a recuring part.

“I didn’t know how many episode [I had]. I think at first, I thought it was going to be just one, but then I saw he survived S3E06 and was back on Discovery, so I was like…I must show back up at some point, right? I had a gut feeling he was going to die at some point, but I’m glad I got to do three episodes before it happened”.

As a new character, we as the fans know very little about the backstory of Ryn, as it turns out, neither did Noah as he was precious little information in which to build his character.

“There wasn’t a lot of extra info about Ryn, so I wound up creating a lot of actor/head-cannon back story, but there was so much to work with. I got to imagine the circumstances under which his antenna were removed, or how long he had his new neck-implant job at the work camp. Just thinking about what those experiences would do to a person made it easy to imagine a full story for this guy that I found very useful as an actor” But what did these head canon moments consist of? “Ah these are my actor secrets… Maybe someday I’ll reveal them but for now the mystery continues…”

So how much of Noah Averbach-Katz can be found in Ryn? What characteristics did Noah use to build the foundations of this Andorian or was it just a blank canvas used to experiment?

“Well, it was a lot of both. I really related to his experience of trying to do the right thing, and then falling as low as he could go – and then with the help of friends pulling himself back together. I just felt very close to that part of his story. But what was interesting was that I had a completely different face – the prosthetic was so wonderful different that I could really try and experiment with stillness, eye contact and physicality in way that were totally new to me. It was a lot of fun” He goes on to say. “I think Ryn and I share a lot – Although he’s had it much worse than I have. I really related with his fall and with his redemption. Trying to do what he thinks is right and hitting rock bottom because of that, then slowly building himself self-up again through his own courage and with the encouragement and support of his friends, that’s something that I really saw in him and in myself”

One of the questions some fans have asked is where does Ryn fit into the Emerald Chain. When we first meet him, he has already suffered his punishment for the attempted rebellion and living out his days on Hunhau, but what did he do for the Chain?

“First off one of the things I love about Ryn is that so much of his backstory is a mystery. In Trek one of the great things is that we learn so much about who everyone is… but that makes it really special when a character shows up that we have questions about or is shrouded in mystery (that’s why I love Garak [from DS9] so much). That said, in an early draft of, I want to say S3E08, there was line that got cut in which it was revealed that Ryn was essentially the Emerald Chain’s Accountant… which is why he knew what he did”.

And what highlights and challenges were there to playing Ryn?

“My favorite part was getting to do so many different things. He had such a big arc for such a short amount of screen time, but in it I got to do so much – run from explosions, get shot, get beamed up, hold a cat, interact with so many different crew members…I really felt like I got to do it all! The hardest part was working in that mask! It was an incredible acting challenge to convey emotion and story without having it look like I was wearing a big fake rubber mask…but in the moments where I felt like I was able to sell a moment and use the mask to my advantage was deeply gratifying”.

It’s clear following his time on Star Trek: Discovery and his recent participation in interviews, pod casts and his approachability on Twitter, that he is clearly enjoying being part of the Star Trek world from an actor’s point of view. I really enjoyed his portrayal of Ryn and he was one of the highlights of Season 3. Its common for actors to return in future series or episodes so we can always hold out a little hope that Noah will appear again in some capacity in future Star Trek.

Did you enjoy Noah Averbach-Katz in Discovery? Would you like to see him return one day in a different role? What about Ryn, was he a good addition to the cast even if it was brief? Let us know your thoughts and opinions by joining the discussions at one of our social media platforms. See below!