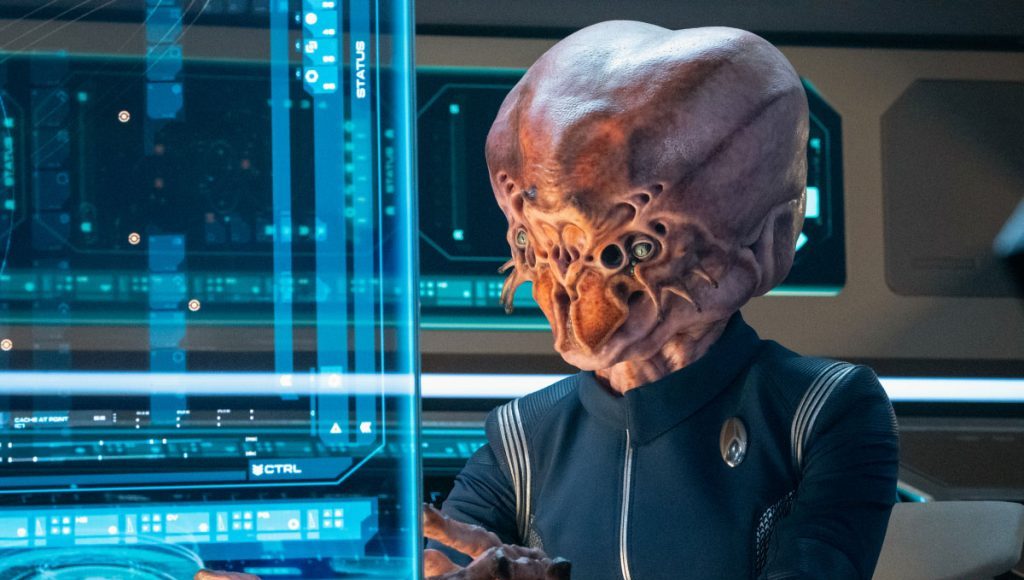 Star Trek: Discovery enters its 8th episode in ‘The Sanctuary’ and we take a look at an episode that was something of a mixed bag for the writing team

This week’s ‘The Sanctuary’ episode was very enjoyable for several reasons for me.

We managed to see some of Books back story as we venture to his home planet to save his Brother (its what they call each other) and his family from the impending threat of the Emerald Chain. Although it was a typical ‘from the book’ type of back story that saw Books family/friends resent him for leaving them many years earlier, of course, everything is resolved at the end by them being forced to work together against a common enemy.

Tilly proved that she has some potential as Sarus no1 by putting the Andorian Ryn firmly in his place when he disrespects Saru in his ready room. It’s still not enough to convince me that she will remain the ships second in command, but it does have me intrigued.

The space combat between the Emerald Chains heavily armed vessel and Books much smaller craft piloted by Detmer was a great sequence. I have seen people online complain that Books ship would or should not be able to do what it did to the Emerald Chain vessel as it would easily be destroyed, but in the history of sci-fi smaller ships tend to always do well against their bigger counterparts. Regardless of the realistic nature of this sequence, I enjoyed more the character moments between the nervous Ryn and the growth in confidence Detmer as they kicked the Emerald Chains ass.

It was great to finally put a face to the name when Osyraa showed up and was played very well by Janet Kidder and in the opening sequence, she murders her nephew, Tolor who we last saw making a mess of things in Episode seven ‘Scavangers’ which saw Book and Ryn escape while laying waste to the Emerald Chain salvage yard. The ruthless nature in which she does away with Tolor demonstrates that she could go down in Star Trek lore as one of the great female villains and she came across as intimidating enough during her communication with Captain Saru. The threat of war with the Federation is her joker in the pack until Ryn, who Osyraa is desperate to get her hands on reveals that the Emerald Chain is running out of Dilithium. Soon their dominance in this future could be under threat. Osyraa will be back and I think it will be during an epic end of season battle between ships of the Federation and the Emerald Chain fleet. One last fight for control of the future.

Before we reach that point, however, we have the mystery of the Burn and whatever is going on with Philippa Georgiou to resolve first. The Burn has been the frustrating element of this season for me as we keep getting little tidbits fed to us and (excuse the pun) it’s a slow burner. In ‘The Sanctuary’ we managed to find out that the Burn has a location, and it links to the Melody that was mentioned by Burnham a few episodes ago. In order to pinpoint the source, however, some data needs to be decrypted and for some reason, even with all the processing power of the computers of the future, this needs to take over an episode to complete. They even laid down a little teaser for us by saying there is a Federation signal coming from the source. Intriguing to say the least. Enterprise? Wishful thinking.

The next episodes are two-parters and it looks like it’s linked heavily with Georgiou and will see a return of Cronenberg’s character. It could be that whatever happened to her in this episode is linked to her return back in time in order for her to survive (and of course appear in the in-development Section 31). How this will happen is a talking point considering the fact that time travel has been banned. It’s safe to say that the series is certainly gearing up now and I will happily predict that we will see the better half of the season from this Fridays with the first part of ‘Terra Firma’

It’s now time, not Vader time or time to stop, look and listen, but time for the official Star Trek Discovery season 3 half time report. Well, ok the halfway point was an episode and a half ago, so this was a flawed point but overall, there is the rule that each Trek show gets much better in the third or fourth season, Star Trek Discovery is certainly fitting that rule and getting much better in season three, but was that the case this week in ‘The Sanctuary’? Well, here is my take on it.

The episode starts with such an obvious misdirect shot of the former Empress Georgiou, that I was surprised that Jonathan Frakes had directed. Unfortunately, this is ultimately something of a metaphor for how I found the episode.

I try to emphasise the good aspects of every episode to counteract the bad. On that note, I loved the Detmer subplot and how she has in reality, never lost a beat in her piloting skills despite her feeling the opposite way. She still has support from her colleagues in the crew and as her frankly badass manual piloting of Book’s vessel shows, her PTSD story is still being addressed this season.

Also, Adira saying definitively how their pronouns are to be said was a much-appreciated aspect. I love when any show demonstrates a stride towards social justice. From TOS having an ethnically diverse cast in the years of Jim Crow (and the dualities in ‘Let That Be Your Last Battlefield’ to name but two of very many), I myself hope this proper use of pronouns is an example which lasts years and decades to come.

Unfortunately, even with the as expected great performances from the cast regulars (especially this week Michelle Yeoh and Wilson Cruz (who I met and is one of the loveliest people I’ve ever had the pleasure of speaking to) I feel the average does slightly outweigh the good this week. Mainly I feel this was best exemplified by Book’s seemingly throwaway story being the B plot and Detmer’s PTSD storyline running mostly in the background. I feel the episode will have been better served had these been inverted from the B and C stories respectively. However, this point could very well be moot by the time we are looking back on the season as a whole once it ends in the New Year.

Additionally, while I enjoyed the issue of Saru mulling over how best to say engage (it even raised a chuckle), I couldn’t help but wonder if by the 23rd century, surely this particular issue is pretty much useless? It must be by the 32nd. Captain Archer had no trouble with the issue, so I wonder if this is unique to Saru. If he doesn’t want to copy Captain Pike, surely it is a mitigating factor that by 3189, Pike must have been dead for centuries.

Overall, I’d say this was a lacklustre episode and if I could sum it up in one word, it will be filler and, in all likelihood, once season three is completed, I’ll recommend people skip this as last weeks ‘Unification III’ was this season’s high, this episode seems the lull before the final push home of the season begins with next week’s two-part starter, ‘Terra Firma part one’. I’m about to give it the lowest score of the season but it must be noted that so far, this season is as strong as Star Trek Voyager’s fifth season and I’d argue the weakest episode of Star Trek Picard introduced us to the greatest cameo of recent times: the Riker family.

What did you think of this weeks entry in Discovery season 3? Let us know via one of the links below.