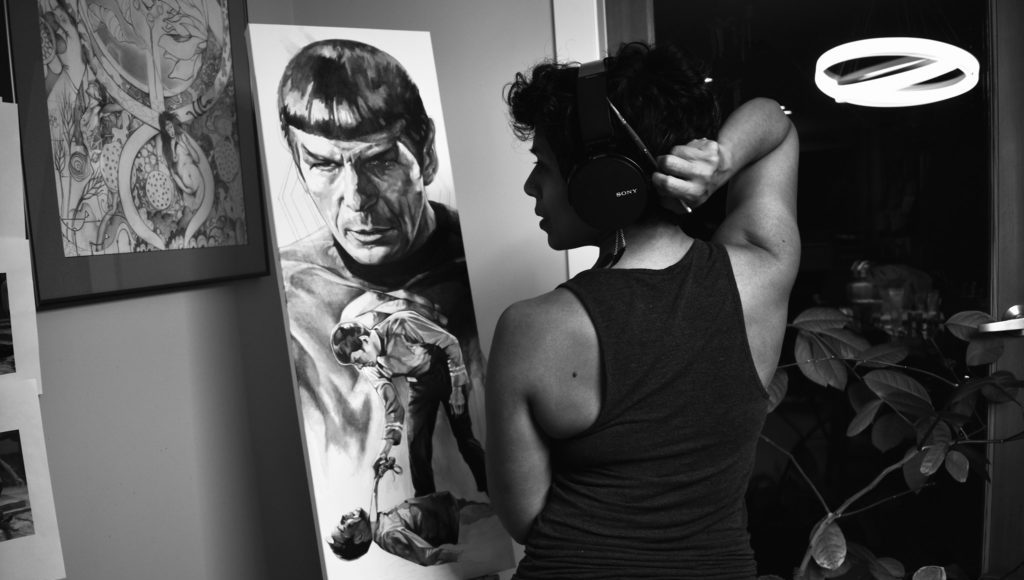 Incredible Star Trek artist Kavita Maharaj took time out of her busy schedule to answer some of our questions in which we get an insight into her influences and creative process.

Kavita Maharaj and Retrospect Studios is a name that is becoming ever more known throughout the Star Trek fan base and for very good reason. Kavita is a prolific fine artist who has been creating works of art for almost 3 decades and in recent years found a creative outlet in the shape of our favourite characters from the Star Trek Universe. It all started with a of series of paintings of Mr Spock and from there the collection has continued to grow to include the main cast of The Original Series and The Next Generation as well as touching on the movies with Khan Noonian Singh and Kim Cattrall’s Lieutenant Valeris from Star Trek VI being included.

Kavita took time out of her busy schedule to chat with TrekThis.co.uk

TrekThis: You have been painting for over 30 years, what was it that originally attracted you into fine art?

Kavita Maharaj: I think first and foremost, I have a natural drive to create and I’ve discovered that if I don’t create on a regular basis, I am less fulfilled in life.  I’m a visual creature as well… it’s how I primarily process the world around me… which feeds into my handling of colour, which has often been remarked upon by fans.  I also have a mind that wants to figure things out… a problem-solving mind…and that leads me to a fascination with what makes things look the way that they do.  This is part of what drives me to work in a more realistic style than I do despite my less literal colour-usage.  Lastly, I’m a philosopher at heart, and so everything that I create is also an exploration of the deeper meaning behind life.

TT: Who has been an influence on you on your painting journey? Artists and their work evolve over time and develop a unique style all their own as yours has, but was there someone whose work inspired you to become the artists you are today?

Kavita Maharaj: Having studied fine art and art history at the university level, I was exposed to many of the artists that are considered great or influential by the established industry.  There are aspects of a few of them that spoke to me: Vincent Van Gogh with his emotive use of colour and movement, Gustav Klimt with his intriguing use of pattern to create interest and complexity, Leonardo DaVinci with his scientifically driven mind (which very much reminds me of my own), and Hieronymus Bosch with his quirky dark humour to name a few.  But outside of these more ‘high brow’ examples, I’ve also found myself very excited by a lot of Japanese animation and comic book art.

TT: In an article for Startrek.com you say that you are a lifelong fan of Star Trek, what was your introduction to the franchise and why did it stick?

Kavita Maharaj: I grew up on the Caribbean island of Trinidad in my formative years.  During that time there were only two television channels, one of which only aired the news and went on air between 6pm and 9pm.  The other channel showed reruns of Star Trek (The Original Series) amongst other things.  I didn’t watch a lot of tv, but I did watch Star Trek.  I think what struck me was the possibility of worlds that could be.  What child could resist that?

TT: What is your fondest memory of Star Trek?

TT: It all started with a painting of Spock, what is it about that character and Leonard Nimoy’s portrayal that resonated with you?

Kavita Maharaj: Leonard Nimoy’s portrayal of Spock speaks to me deeply as it demonstrates what I see as true nobility.  To me, nobility is choosing to act in line with your higher values despite the strong, and at times painful lower callings of your ego/emotional drives.  Being a noble human being in this world, is incredibly important to me… it is in fact, one of my highest values.  As Spock, Leonard Nimoy continually demonstrated his commitment to nobility especially in the face of his more reactive human traits.

TT: A lot of your work has been within the legacy era of Star Trek such as the Original Series and Next Generation, along with some paintings of the Continues cast members. Are their plans to incorporate any of the new Trek characters such as from Discovery or the upcoming Strange New Worlds?

Kavita Maharaj: One of the interesting things that many Trekkies aren’t aware of is that when you become licensed with CBS, your contract is specific to particular ‘properties’.  Because my focus was on Leonard Nimoy’s Spock when I started talking to CBS two years ago, I only requested the properties that had his character appear.  As a result, my work has centred, as you pointed out, around The Original Series and the Next Generation.  The end of this year marks the renewal time for my contract with CBS, and I’ve started chatting with them about expanding my property licensing.  This is because I’d like to expand further into the Trek Universe.  I’ve actually been asked by two current Discovery actors to work on pieces of their characters, and so it’s my hope to be able to do so.

TT: When looking for a new subject for one of your works, how do you go about choosing? For example, you recently painted a scene from Star Trek VI in which Spock uses his mind meld technique on Lieutenant Valeries, ‘Paradise Lost’ stating that “this scene evokes strong and divisive feelings amongst fans”, so what was it that drawn you towards it?

Kavita Maharaj: Often times I decide in advance that I’d like to work on a particular character.  Once I’ve decided that, the next step is to find an image of the character with an expression that speaks to me.  If I find that expression, I’m off to the races.  If not, that character gets put to the side until I can find the reference image that lights me up.  With the “Paradise Lost” piece I decided to paint this because I found the scene particularly powerful and a deep investigation of the difficulty of nobility.  In this scene Spock chooses to interrogate Valeris in a very invasive way.  It is obvious to me during this scene that this process is both violent and painful to both him and Valeris.  Spock does this because he feels that he must in order to serve the greater good, but he will never be the same after this act.  To me, this was an essential part of my exploration of nobility through Spock’s story.

TT: Have you any words of advice to any young artists wanting to follow in your footsteps?

Kavita Maharaj: I absolutely do.  Create what speaks to you, not what you think others will value. Commitment yourself to your art, consistently exploring that which genuinely drives you.  Make time for it.  It is important.  And you will grow beyond belief if you do so.

TT:  Finally, I must ask. Kirk or Picard?

Kavita Maharaj: The truth is that if I were to take a broad and critical view, Picard was a better ‘company man’ or captain.  But Kirk, still holds the heart of the child inside.

Kavita’s collection is officially licensed by CBS and available for purchase. To See more of Kavita Maharaj’s work by visiting her website and social media: