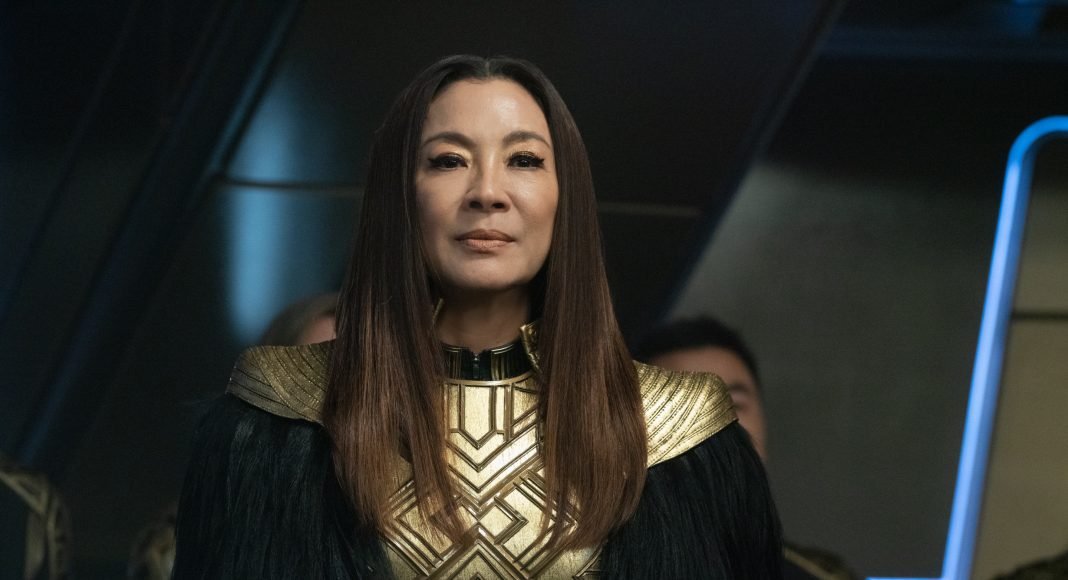 ‘Terra Firma Part 2’ brings back a classic Star Trek character and ends the journey of Michelle Yeoh on Discovery. But did part 2 live up to expectations?

Dave found the second part of ‘Terra Firma’ to be an excellent end to the character of Georgiou on Discovery as it gives her a fitting a send-off and we can now look forward to her reappearance in Section 31.

So here ends the journey of Phillipa Georgiou on Star Trek: Discovery. ‘Deceased’ according to the record of the USS Discovery. No doubt to ensure no comebacks on them given the strict regulations on the restriction of time travel in the 32nd Century. It would appear then, that the experiences of the Mirror Universe within this two-part episode was indeed some kind of illusion, nothing more than a test to ensure that Georgiou was worthy of being saved. Her actions in the illusion proved that she was worthy as she tried to demonstrate that there was a better way of doing things, a higher morality which she looked to instil on the mirror Burnham. Proving to herself that if she can save Burnham she can change the mindset and nature of the Terran empire. Alas, as has been throughout human history, our nature is a hard thing to change and so it proved here. I speculated in my last review that the dead body we see in Georgiou’s flashbacks could be Burnham dying and that no matter what Georgiou does, she cannot save the life of Burnham and that she is always destined to die. I was wrong on the body belonging to the evil counterpart but I was right on the fact that Burnham looks set to always betray the Empress and end up 6 feet under.

Georgiou’s redemption is complete, she has been sent back in time but the question on everyone’s lips is where? Covid19 may have played havoc with shooting schedules but I think that in this instance there could be a case of good fortune. With Strange New Worlds now in pre-production, I would like to think they could capitalise on this and have Georgiou appear on the bridge of the Enterprise not long after witnessing the Discoveries 930-year jump to the future. After a few questions by Pike and Spock learning of his sisters’ fate, she is handed over to Starfleet intelligence and this is how Section 31 could start.

I want to mention the Guardian of Forever. First of all, it was great speculating and reading all the different theories online relating to who Carl was. Was he a Q, was he a new being altogether or was he (as it was proven to be) the Guardian? Tying his fate into the temporal wars was a great backstory to what has happened since his encounter with James T. Kirk and that the fact that he could move around made a lot of sense. Everything about his reveal was done just right and I was almost giddy when he spoke the classic line. I also think that they have linked Carl as a personification of the Guardian to the original concepts in the first scripts for ‘The City on the Edge of Forever’ in which Kirk and co encounter beings instead of a doorway that talks. Which in itself is a great touch.

This episode wasn’t perfect of course as it did push some long-lasting season elements to the backburner in favour of Georgiou’s send-off. I don’t blame the writing team for this as Michelle Yeoh certainly deserved the limelight given her excellent contribution to this show over three seasons. I am now looking forward to Episode 11 where I am hoping we can finally get a full explanation on what the Burn was and how it happened. I was also a little disappointed but not surprised that we didn’t at least get a few minutes with Jason Isaacs Captain Lorca but when watching the episode back, it’s hard to see where they could have fitted him in. Maybe instead of having the character of Duggan, we could have had Lorca instead, but it wasn’t meant to be.

A great emotional goodbye to Georgiou in Discovery that leaves me very much looking forward to the incoming Section 31 and excited to see what is now in store with the rest of Discovery in relation to the Burn, the Kelpien ship and of course the confrontation with the Emerald Chain.

Last week’s episode review was a difficult one, as anyone who has read that review can attest, as I felt it a challenge to review half of what is essentially a complete episode, but this is the challenge of looking at two partners on its individual merits. However, as all good two-part episodes tend to do, ‘Terra Firma Part 1’ certainly left me want to know more unlike previous double episodes from elsewhere in the franchise (such as the Star Trek: Voyager two-parter ‘Workforce’). Coupled with my enthusiasm for what I’ve now dubbed ‘Fantastic Friday’ – which encompasses new Star Trek and new Star Wars – it’s fair to say I was excited for ‘Terra Firma Part 2’.

I’m pleased to report that not only did I scream ‘I knew it’ at the reveal of the Guardian of Forever to the point where my neighbours heard me, I also incredibly pleased that they have kept the Guardian’s voice the same as it was in ‘The City on the Edge of Forever’ over a half-century ago. I gladly accept that the current Kutzman crop of Star Trek spin-offs is a visual-only reboot of the franchise, but nuggety Easter Eggs of continuity such as this are what keep long term fans coming back for more and more.

The reveal may have had a somewhat cliched sci-fi trope ‘crash zoom’ type effect but that did not detract from the fact that for all its visual changes, the heart of Star Trek still beats as strong now as it did from 1966 as the production remained true to the Guardian. Another aspect of the show I enjoyed was in the mirroring of the episodes opening titles just as they did in Enterprise’s ‘In A Mirror, Darkly’ two-parter in which they showed the Mirror Universes alternative journey to the stars. To paraphrase ‘its Trek Jim, but not as we know it!’ I always took that to mean there are changes but the key is to learn why such changes exist, the results speak for themselves.

Michelle Yeoh was the star here. The majority of scenes on the mirror I.S.S. Discovery revolves around her and Sonequa Martin-Green while the rest of the cast could revel in hamming it up to a delightful degree (particularly Mary Wiseman’s Captain Killy), Michelle was afforded no such luxury.

That’s not to her detriment. While Sonequa could chew the scenery (as I said, to a delightful degree here, but I imagine a season of this might prove a bit much), Michelle beautifully played the frankly complicated role of an Empress who once ruled her Terran Empire, but after being ripped from it and exposed to the prime timeline for a relatively brief time and then suddenly dropped straight back into her old life, is now a clearly changed woman. Her farewell with Michael before stepping through the Guardian was just one of many emotional moments for audiences of all Star Trek (although notably missing from the death of Tasha Yar in The Next Generation’s ‘Skin of Evil’).

The Mirror Universe I was afraid would be something of a crutch for Star Trek: Discovery. Fortunately, while it felt like the scenes there took half of the shows run time, they were in fact, fully justified and while I did still have questions after the episode, I felt that not only did I have answers, but that I still want to see more.

Overall, a fantastic episode and while I firmly believe that the two parts would have been better served if they were released simultaneously as was the case with the season one premiere episodes, I must say this episode gets a strong recommendation from me and scores a good 4.25/5 with a strong recommendation the previous episode be watched immediately beforehand.

The Guardian of Forever returns! Give us your reactions via the links below!