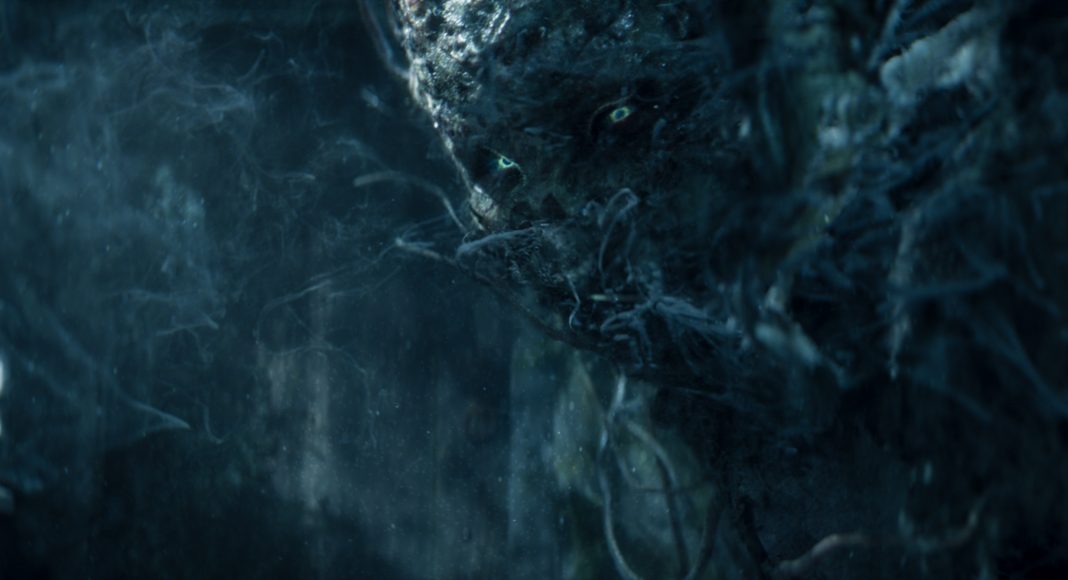 Discovery finally gives us an answer to the Burn, but was it worth the buildup or is it one of the biggest anticlimaxes in Star Trek history?

As its Christmas, I have given the writing team the week off from writing the review for this week’s Star Trek: Discovery, I know I am such a generous editor. The question is, will my review of episode ten ‘Su’Kal’ be as generous? The answer is sort of.

The Discovery arrives at the Verubin Nebula with Captain Saru hell-bent on rescuing the sole surviving member of the crashed Kelpien ship at the heart of the highly radioactive cloud. Discovery herself attempts to transverse the nebula but due to the conditions inside it proves too dangerous a task and so Book suggests that his smaller ship might be able to do a better job. Saru agrees and although this scouting mission by Book is equally dangerous, he manages to locate a ‘safe spot’ in which Discovery can jump into. They discover that the Kelpien ship has crashed landed on a planet that appears to be made up primarily of Dilithium and given its rarity in the 32nd Century it’s a truly valuable find. Eager to beam down the away team consists of Saru, Burnham and Culber who has medication that will help them survive the conditions they will encounter on the crashed ship. Culber stating they will have 4 hours before the exposure to the radiation will become lethal. Burnham expresses a concern that Saru might not be able to remain objective given the situation but more on this later. Leaving Tilly in charge they beam to the Kelpien ship.

They arrive but not as themselves, Burnham has become a Trill, Culber a Bajoran and Saru is now human. An unmasked Doug Jones was unusual to see, mainly because its such a rarity to see his face free from layers of prosthetics. I am glad to say that it does not affect his performance and he is just as wonderful as a human as he is a Kelpien. They quickly discover that they appear to be in some kind of hologram program which is the reason for their altered appearance, and we learn later that this is because it would be easier on the surviving Kelpien who has not seen anyone else outside of the holograms pre-programmed parameters. As our three heroes explore it becomes apparent that the program is breaking down, characters from the hologram they meet are malfunctioning and the world around them seems unstable. This is a great call back to Star Trek of old, there have of course been many episodes that have utilized or been set within a malfunctioning holodeck and for me, this has been one of the thrills of season three. The writers have managed to find a way to bring in elements that feel very much Star Trek without going overboard or using them just as fan service. The Citadel they find themselves in (which was this episode’s former name before they changed it) also reminds me of the classic Star Trek TOS episode ‘Catspaw’. The throwbacks to classic Trek don’t end there as when we meet the lone Kelpien he is quintessential Star trek.

The Kelpien is the child of Dr Issa who was pregnant when she sent out the distress signal decoded by Discovery (the marks on her head mistaken for radiation in the last episode appear to be a sign of Kelpien pregnancy) during the ‘Terra Firma’ two-parter. When we meet him, he is nothing more than a child in an adult’s body, knowing only what the hologram has shown him, designed to build his knowledge and prepare him for rescue. He is naïve and innocent and totally unaware of the devastation that he has caused, because as it turns out, this Kelpien named Su’Kal, is the source of the Burn. For reasons that weren’t addressed during this episode, the program seems to have failed Su’Kal as when he meets Saru, Burnham and Culber he is scared and runs away. He has been in the simulation for many years, but his intelligence is still that of a child, it could be that the radiation started to affect the program quicker than Dr Issa expected and Su’Kal has struggled to learn of the outside world and so he is filled with fear. This is what brings us to the Bun.

In this hologram program a monster has been created, a monster from Kelpien myth designed to allow Kelpiens to face their own fears. Due to the failure of the program, Su’Kal has only ever faced his fear once and it seems the showdown with this manifestation is what caused the Burn. When int his mother’s womb his molecular makeup was changed due to the radiation of the planet and the proximity of all the Dilithium which has given him a unique ability. When scared he lets out a scream that seems to create a pulse that destabilizes Dilithium. The more scared he is the bigger the pulse. 120 years ago, he got so scared his scream destroyed ships all over the galaxy. We are privy to this as Burnham who while investigating the monster sets it free and it confronts Su’Kal again, only this time the pulse was minor enough not to cause to much damage, although it does affect the Discovery. What doesn’t make sense here is that the Burn happened 120 years ago and, in that time, Su’Kal has managed to control his fear enough to not let out a burst again? That seems unlikely given that this creature’s main job is to scare Su’Kal. Now as mentioned, Burnham seems to free the creature from captivity so it could be that Su’Kal managed to lock the creature up somehow and then avoided that part of the program like the plague. A bit more on this would be nice.

This is where fans might have an issue with the Burn. There has been a lot of build-up leading up to this reveal and some might think it something of an anticlimax. The Burn is one of the biggest and most catastrophic events in all of Star trek and to learn that it was basically caused by a screaming child can be seen as a bit of a letdown. As Trek does it’s explained by a lot of technobabble and we will probably learn more in the next episode and I must admit I was also a little surprised by the reveal. But the more I think about it the more I think that it fits perfectly into Star Trek. Many times, in the history of Trek we have seen beings who have been responsible for death, pain and damage but did so unknowingly or unwittingly. Su’Kal is an innocent who is a victim of his circumstances and he has no way of knowing that he can cause such catastrophe in the universe. The reveal also offers more emotional weight into his rescue.

Of course, the rescue of Su’Kal is not the only plot point of this episode, as we also follow Tilly as she is left alone to command the Discovery in Sarus absence. For me, this is a great sequence as we get to see the respect from the crew for Tilly but also the potential for Tilly as a first officer. Especially when the Emerald Chain turn up looking to take over the ship and capture the spore drive. This sequence of events that see Tilly hold her own against Osyraa in terms of quips is enjoyable and adds weight to the theory that there is an Emerald Chain spy on board Discovery. How did the Emerald Chain know where Discovery would be? The Discovery can jump across space, but the Emerald Chain arrive within a couple of hours of their arrival of the Nebula using normal warp drive. It would seem that they already knew where Discovery would be. Unfortunately for Tilly, hurtful comments are not enough to stop Osyraa taking over Discovery and jumping to another location, leaving Saru, Burnham, Culber, Adira, (who beamed down with more meds for the landing party) and Book who used his ship to get Adira inside the nebula, stranded.

One of the underlining story points in this episode appears to be Sarus ability to remain objective and emotionally detached from the mission. This at first glance would seem strange as Saru has had no issues in past episodes this season, but because this mission is to rescue a Kelpien, there is suddenly a concern that he won’t be able to hold it together. This is specifically mentioned by Burnham. Saru has a very emotional connection to his people given what they have been through and the reveal that Vahar’ai is not the death sentence they had long believed, changing the species forever, a revelation that Saru himself brought to his people as seen in season 2. So, I can understand what the writers were thinking when they wrote this particular plot point, however, I think there is another reason for it that will play out over the next two episodes. The redemption of Burnham and her rise back to first officer. With Discovery being taken over during Tilly’s watch and a potentially compromised captain, Burnham will step up and take charge. They will escape the planet using Books ship and the Kelpien ship (with Adira beaming down, she is an engineer so can help repair the Kelpien ship) and using the two ships formulate a plan to take back the Discovery before Osyraa completes whatever mission she has planned.

This might annoy some fans who already think that Burnham gets too much of the limelight and this would be her saving the day again, but I can’t help but feel that this is where Burnham’s arc is heading. I also predict that once everyone is saved Tilly will happily give up the first officer post to Burnham but will no longer be an ensign as she will gain promotion. Of course, with two episodes to go, I could and will most likely be proven wrong, which will certainly not be for the first time.

Overall, this was a good entry into the series that will, unfortunately, cause some derision from areas of the fan base who were expecting something a bit grander in relation to the Burns reveal.

The Burn finally revealed? What did you think? Happy or let down? Jump over to our Discord server or Facebook/Twitter to let us know.