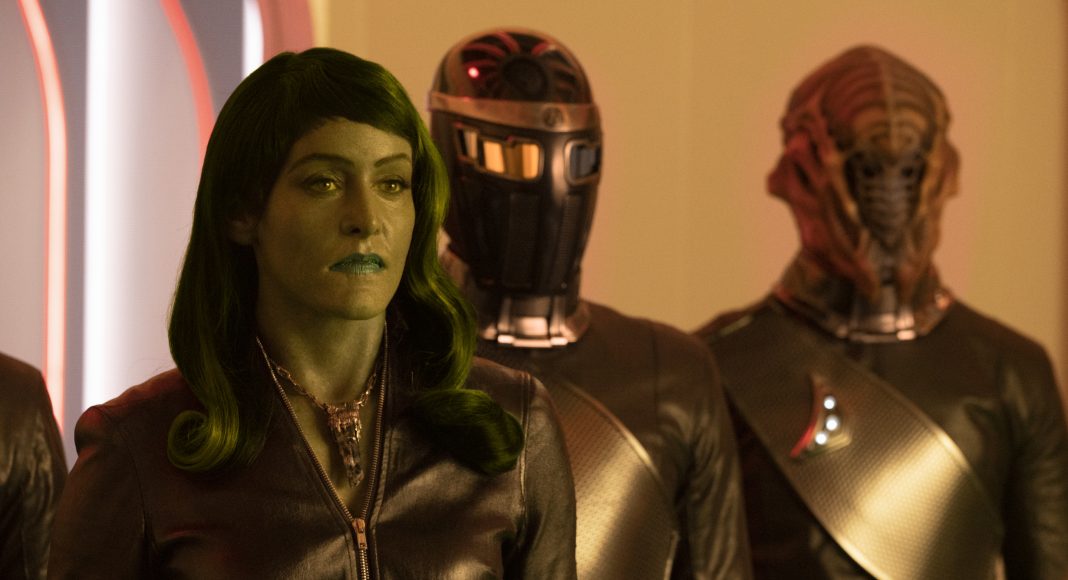 Discovery Season Three Reviewed: There is a Tide.

‘There is a Tide’ is the Penultimate episode of season three and the 800th episode of Star Trek to air on TV, a landmark in the franchise, but does the episode live up to expectation?

First up is Dave who feels that for the 800th episode, it could have been better.

For me, this was one of the more predictable episodes that Discovery has given us during its season three-run. Everything that happened was pretty much standard fare that didn’t surprise or offer anything other than a set up for the season finale which will no doubt feature a battle between the Emerald Chain and the Federation. Something that I have said would happen as soon as we knew that there was an enemy organization in this season. ‘There is a Tide’ while an enjoyable episode with well-documented nods to Die Hard (something my colleague Jack will cover with his thoughts below) there was nothing in it that blew me away.

Osyraa using the Discovery to enter Federation space while Burnham and Book crash through the docking bay in order to infiltrate the ship was a good sequence that showed Admiral Vance in a great light as he remains practical and calm while dealing with the situation very well. Certainly, proving that he is not one in a long line of flawed admirals littered all over the Trek history. But once Book and Burnham entered the ship and parted ways it was such a stereotypical ‘action movie’ type series of events that unfolded before our eyes. Book being captured by the Emerald Chain and held up with the command crew who then use morse code as a way to communicate, inciting the guards to confront them only to be overpowered and allowing them all to escape. Another fine example from Star Trek that security in the future is absolutely appalling. The negotiations between Vance and Osyraa was only ever going to end one way with the bad guy walking out with a “you’ll regret this” attitude. The scientist Aurellio (great character played by Trek veteran Kenneth Mitchell) who firmly believes in the good of Osyraa and the Emerald Chain, later discovering that she is not what she appears to be and is having doubts. It would not surprise me if he betrays Osyraa in the last episode. Ryn, who I was really enjoying as a character was killed in front of Book and Aurellio (motivation for his doubts) is going to stir revenge feelings in Book and I can’t escape the feeling, especially now that Burnham and Book have officially said “I love you” to each other, that this will be the cause of Books death. That’s right, I think Book will be killed in the last episode.

Finally, Burnham makes the sacrifice play by ejecting Stamets out into the void of Federation space so he can be picked up by Starfleet, knowing that his ability to pilot the spore drive is key to stopping Osyraa, but also means that the crew left behind on the Dilithium planet in ‘Su’Kal’ could die. And I want to focus on this scene. For me, this was one of the best scenes in season three and I have to applaud Anthony Rapps emotional performance. There have been rumblings early in the season that the crew might have sacrificed too much by coming to the future, some doubts still lingered maybe. Staments threw these doubts straight at Burnham and everything he said was right. They gave up everything to be with Burnham and he has every right to react the way he did. Of course, we all know that Saru, Adira and Culber will be OK but from a character perspective he firmly believes that Burnham’s actions are basically killing off his family, it will be interesting to see the ramifications of this between the two in season 4.

One other gripe I did have with this episode is that we didn’t revisit the Dilithium planet or find out what is happening with Su’Kal. It would have been good to at least visit the planet for an update and to be fair, there were places in ‘There is a Tide’ when they could have done that, I feel leaving it for the final episode, alongside with a final explanation of The Burn will make that episode feel too full. I might be wrong but Discovery has been guilty of convoluted episodes in the past.

Next up we have Jacks impression of ‘There is a Tide’:

As of ‘There is a Tide’, after 54 years and just under 3 months, there have been exactly 800 episodes of the Star Trek franchise as a whole. This episode, the penultimate of season three is also the middle part of the closing act.

Firstly, we shall deal with what I loved. The scenes between Ohded Fehr’s Admiral Charles Vance and Janet Kidder’s Osyrah. Though on paper, a lengthy sequence of negotiations between the two sounds roughly as dry as a bone. I thoroughly enjoyed their scenes they also shared with a somewhat dressed up lie detector machine. It felt a thoroughly 20th-century solution with a 32nd-century veneer. However, it is somewhat comforting to know this is an evergreen problem and although it could be argued that logically, negotiations and interrogations in the far future will be unharmed by such things, I can easily believe they will rear their ugly heads for centuries to come. That might be pessimistic but also shows not only will we develop ways to overcome this, but perhaps, more importantly, underscores the fact we likely already have, a very Star Trek Discovery theme and perhaps one which broadly applies to Star Trek as a whole.

It may also just be me looking too deeply into this, but as with last week, I thought some of the movements which Janet Kidder imbues Osyrah with seem extremely reminiscent of Kathryn Janeway. With the USS Voyager NCC 74656 J established in cannon now and the fact Kate Mulgrew is definitively back in the Star Trek fold with Star Trek Prodigy, not to mention Michael’s mum turning up 930 years in the future, I am wondering if we will get to see the descendant of Shannon O’ Donnell as a part of next week’s season finale, ‘The Hope That Is You Part 2’. Although I admit this is more of a hope on my part.

As is a tradition with me, every Christmas Eve I sit down to watch my favourite Christmas films and one of those is always John McTiernan’s 1988 Die Hard. So, while I could never reasonably expect Discovery to exactly remake it and keep the somewhat family-friendly rating (although Star Trek did do this with The Next Generation’s sublime ‘Starship Mine’ an episode I consider a hidden gem amongst over 800). I enjoyed the nods such as Michael walking barefooted with blood dripping down and crawling through ducts whilst the antagonists communicate with her over an open com badge.

What I didn’t like was mainly how the series regular crew (with the possible exception of Lieutenant Commander Paul Stamets) for having relatively little to do all episode, however like with the two-episode opening to the season, I feel this episode should be viewed as both a companion piece to last week’s excellent ‘Su’Kal’ as well as a continuation. I hope to touch on this is my series recap soon, but ultimately, I think with how Star Trek now structures seasons into chapters, I’d say that one episode for the week is somewhat pointless in this modern age of online streaming and something which certainly needs addressing, hopefully before Picard 2 and Discovery 4.

It seems to me to be quite fast – since Discovery emerged in the 32nd century – but the “adoption” of Adira Tal by Hugh and Paul seems somewhat fast and for plot convenience given how little screen time the three has shared. However, the parent/child bond adds extra emotion to a strong performance by Anthony Rapp when he realises Burnham’s plan to send him off to safety. A great and powerful scene.

Overall I’d recommended all watch ‘There is a Tide’ alongside last weeks as I feel that will improve the experience immensely and feel ill not only add next week’s episode to that too but once I get to my season review, recommend binging the whole season in very few sittings.

4.25/5 keeps up the overall quality of this season, let’s hope they stick the landing next week – I’m optimistic that they will.

For the writing team, the 800th episode in Star Trek was a mixed bag, but what was your take away? Did you enjoy it and what are your predictions for the finale? As always let us know by joining the discussion via the links below.