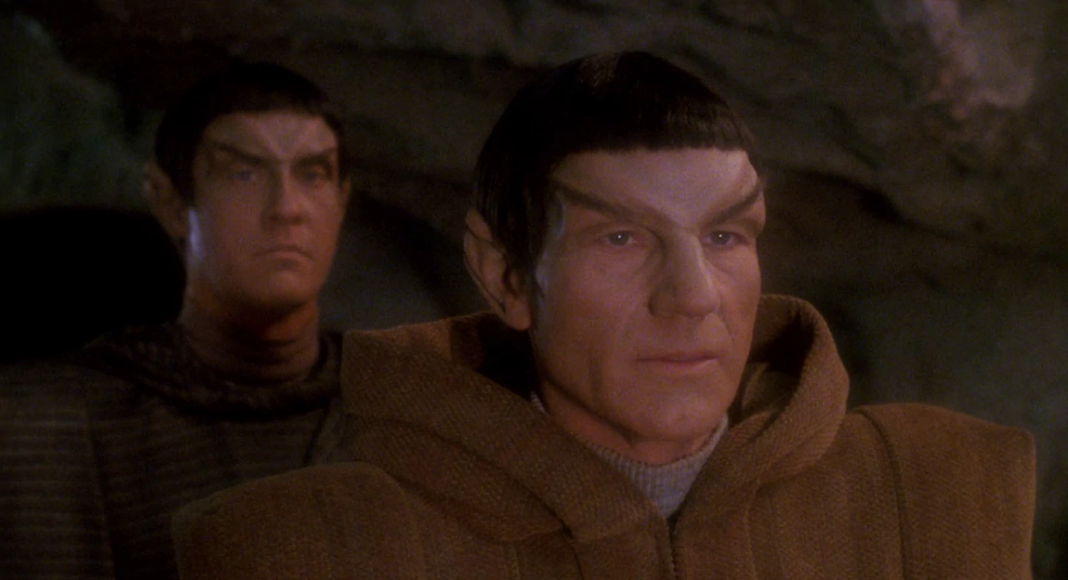 Trek Back: ‘Unification I’

It’s 29 years since Spock first returned to TV, and we take a Trek Back to Star Trek: The Next Generation’s ‘Unification I’.

In September 1991 Star Trek celebrated 25 years. We were treated to The Undiscovered Country in December. On television, The Next Generation gave us ‘Unification I’.

While billed and positioned as featuring the return of Spock, ‘Unification I’ doesn’t actually feature the character much, if at all. Apart from a being mentioned throughout the script, a blurry in-universe image and a brief appearance in the cliff-hanger, we’re not given a fan-service story. This works in its favour. There’s a genuine reason for Spock to be of huge importance to the proceedings.

Word has reached Starfleet HQ that the highly-respected Ambassador Spock has been seen on Romulus. Starfleet fears a defection. If true, it would rock the Federation to its core simply because of Spock’s near-legendary status. Picard is assigned the difficult task of discovering Spock’s rationale and if he really is on the Romulan home-world.

Bearing in mind that we have had nearly three decades of subsequent story-telling following this episode, one can’t help but join some dots that probably weren’t even there in 1991. ‘Unification I’ (and its sequel) has very definite links to the wider Trek canvas. At the time of airing, The Undiscovered Country was a month or so away from being released. The seeds of that story, the Klingon Empire collapsing, Spock stepping up to broker a peace accord between the mighty warrior race and the Federation, had a direct impact on the character. He saw the future being bright between Vulcans and Romulans. They share a common ancestry, after all.

It also triggered a very long-reaching plot thread regarding Picard’s support of the Romulans. Post-TNG, he assisted Ambassador Spock when Romulus was destroyed. Spock’s disappearance (into a parallel universe) left Picard with the oppressing burden of carrying the problem himself. It alienated him from his beloved Starfleet. This in many ways echoed Spock’s conflicts with his father Sarek and his retirement from Starfleet.

‘Unification I’ also tapped into threads first seen in TOS‘ ‘Journey To Babel’. We first met Sarek here, learning of his struggles to raise Spock. Interestingly, The Animated Series‘ ‘Yesteryear’ was also alluded to and TNG‘s own ‘Sarek’ was directly referenced.

So as a celebratory episode, it found common ground between old and then-current Trek, even forecasting future series and movies. It was also one of the most-watched of TNG‘s entire run, broadcast soon after Gene Roddenberry died. It’s touchingly dedicated to him.

As a TNG story, however, did it stand up on it’s own very well?

Admittedly ‘Unification I’ is the first part of a double-episode, and we’re all waiting to see Spock. There is a mystery surrounding a Vulcan deflector dish that sends the USS Enterprise, under Riker’s command, to a Zakdorn junkyard. It’s a subplot that seems to fill air time. That said, it’s a fun series of scenes where it reinforces the relationship between Troi and Riker. Now knowing their future, seeing them interact at this time in their lives is rather sweet. Once he understands the Zakdorn’s own view in the universe, Riker knows straightaway how to get the information out of him.

Interestingly, it matches Picard’s own methods to obtain passage to Romulus on a Klingon Bird of Prey. He panders to the pomposity of the junior-ranking Klingon and massages Gowron’s ego. It works, just as Troi’s approach got the information they needed from the Zakdorn.

Mark Lenard performed his final scenes as Sarek in ‘Unification I’. As usual, he elevated any scene he was in, even topping Patrick Stewart’s strengths. We had already been told the character was suffering from Bendii Syndrome. This is a fictional neurological illness that makes the sufferer lose a grip on their emotions. This is an appalling condition for a Vulcan. Lenard’s heart-breaking performance is sadly watered down by Sarek’s off-screen demise. In some ways perhaps this was better than a cliched death in Picard’s presence. Nevertheless, even to this day I still consider Picard’s bond with Sarek rather tramples over Spock’s own relationship with his father. Father and son never mind-melded, but I just found Picard to appear conceited that he knew Spock’s father better.

Picard and Data, under heavy prosthetics, journey to the heart of Romulus. There, they intend to uncover Spock’s whereabouts and his relationship with Romulan dissident Pardek. We are told this is a figure he met at Khitomer. Khitomer, of course, would be seen in the forthcoming The Undiscovered Country, although Pardek himself wouldn’t be. When they are captured by Pardek’s men, from the shadows emerges Spock, admonishing Picard for coming to find him.

Dennis McCarthy supplied the incidental score and it falls into the usual 90s Trek dirge of atonal background music. The music was written intentionally this way for the majority of TNG, DS9, Voyager and Enterprise. The producers insisted it sit behind the action and dialogue. While that does allow the focus elsewhere, it doesn’t bring suspense and drama the way that a score should. I acknowledge that this is TV and not film. There’s still no reason why Trek TV composers weren’t allowed to fully emote through their music. One only has to think of the passion in the music for The Motion Picture, The Wrath of Khan and The Undiscovered Country to hear how it enhances a scene so. TV shouldn’t make a jot of difference.

A special episode in the history of Star Trek, what are your memories? When did you first see it? Join us on Facebook, Twitter and Discord and let us know!