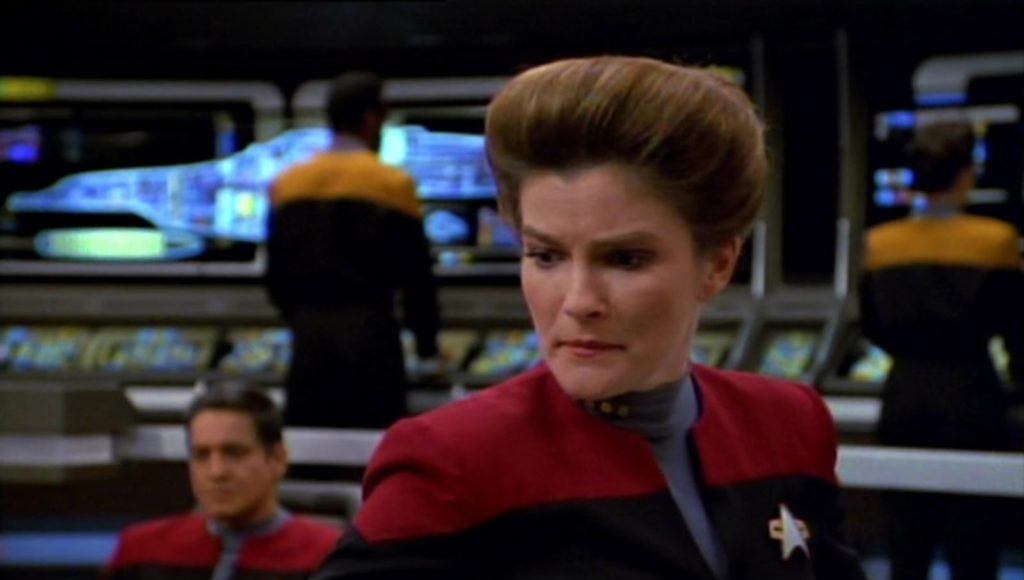 Why Kathryn Janeway Is The Leader We Need Right Now

With the timely announcement that Kathryn Janeway is returning to the Star Trek Universe, TrekThis writer Jack looks at why Janeway could be the leader we need in a time the world is facing a crisis that seems straight from the realms of science fiction.

Before I start, I am aware of the great difficulty in avoiding discussion of politics right now and I am also aware that they are not exactly the greatest subject, especially in your first post for a website. But as Constable Odo says: ‘there’s always hope’ (Deep Space Nine season 7, episode 1 ‘Image in the Sand’) and so in that spirit, I present why Kathryn Janeway is the leader we all need right now.

One of the most unsung facts of 2020 being so downright awful is simply that now we can all watch the Star Trek: Voyager episode ‘Macrocosm’ and be forgiven for saying ‘yes, I really enjoyed seeing the Captain not only stabbing a virus in its face (I suppose) but also brutally hacking one of its tendrils off with the same knife.’

At time of writing, like many others, I have been on furlough the past 210 days and one realisation I have had: not only is Kathryn Janeway a fine and upstanding example of what it means to be a senior officer in Starfleet but is also the very leader that this world needs right now.

Firstly, we need to look back at the fact she united two formerly rival crews; the Starfleet crew already under her command and the Maquis that she was tasked with capturing in ‘Caretaker’. Forced into a long journey together, half a galaxy from home with tensions running high and potential saboteurs in her ranks, Janeway shows amazing resilience, bonding the crew together to work as a single unit with unswerving and total loyalty of all under her first command. In the current climate of Covid19 with bickering politicians and unruly constituents, this could seem one of the simpler tasks for Janeway to resolve.

Something which cannot be overlooked is another aspect unique to only her. Sure, she shares the dubious distinction of being assimilated by the Borg briefly with fellow Starfleet officers B’Elanna Torres, Tuvok and the legendary Jean – Luc Picard, but Before and after this, she mentored an ex-drone in Seven of Nine. When Seven came on to the ship in ‘Scorpion part 2’, the emotional and physical wreck of the former Annika Hansen (Jeri Ryan) went from lashing out to anyone offering her anything less than re-assimilation into the collective (Star Trek Voyager season 4 episode 2, ‘The Gift’) to experiencing what she had previously viewed as the pinnacle of perfection for 9.2 seconds (season 4, episode 21 ‘The Omega Directive’) and soon after, due to an imperfectly designed understanding of various Voyager reports, Seven is convinced of various conspiratorial theories of life aboard the U.S.S. Voyager to the point where even the Captain and First Officer are adorned with phasers. After making an escape attempt on a shuttle, Janeway beams aboard without hesitation and despite the damage caused by Seven, Janeway shows her caring and understanding side by not only forgiving her ward but by bringing her back into the fold in spite of all that she had done (season 6, episode 9, The Voyager Conspiracy). This demonstrates that even in the face of adversity, when those closest to her begin to see conspiracies and false truths, being accused of actions that she has not taken, Janeway is still there for her crew, prepared to offer them the benefit of the doubt, to rationalise the situation and not hastily take actions with consequences that cannot be undone.

Captain Kathryn Janeway is no rogue or maverick. She upholds only the finest standards that her uniform represents. This can be best exemplified in the scene set in Engineering from ‘Macrocosm’ where she disrobes the outer layers of her uniform and packs her compression phaser along with the scientific instruments she needs to analyze the pandemic currently plaguing her vessel and crew. Filmed as one long scene, bereft of any dialogue is eerily reminiscent of a shot in James Cameron’s Aliens released some 11 years before where heroine Ellen Ripley uses duct tape to attach a rifle to a flamethrower ahead of a confrontation with the titular species’ Queen. This extremely long sequence is something unique to Kathryn Janeway. It happens to no other character, regular or not either before or after in the show’s run. This helps to emphasize the unique leadership Janeway wields and her ability to take control of a situation; a confrontation of any kind is always something she is looking to avoid, but when it’s needed, she is prepared to take ownership and fight back. Working with the ships hologrammatic Doctor and once paired with the facts, she utilises the holodeck and not only destroys the plague (arguably the finest example of scientific advancement on the vessel) but then uses her amazing diplomatic skills to prevents a second invading alien species (the Tak Tak who attack Voyager to eliminate the infection) from destroying her ship and crew.

Kathryn Janeway throughout all seven seasons of Voyager consistently demonstrates how she excels in leadership, a fact only strengthened by her being promoted to the rank of Admiral years ahead of Jean Luc Picard, despite him commanding two flagships of Starfleet and beginning his time in Starfleet years before her.  I think it is therefore evident to me that Kathryn Janeway would be an incredible change in leadership that would command at least my confidence in facing the challenges which are faced by COVID – 19

Let us know what you think, follow us and get involved via our social media platforms: