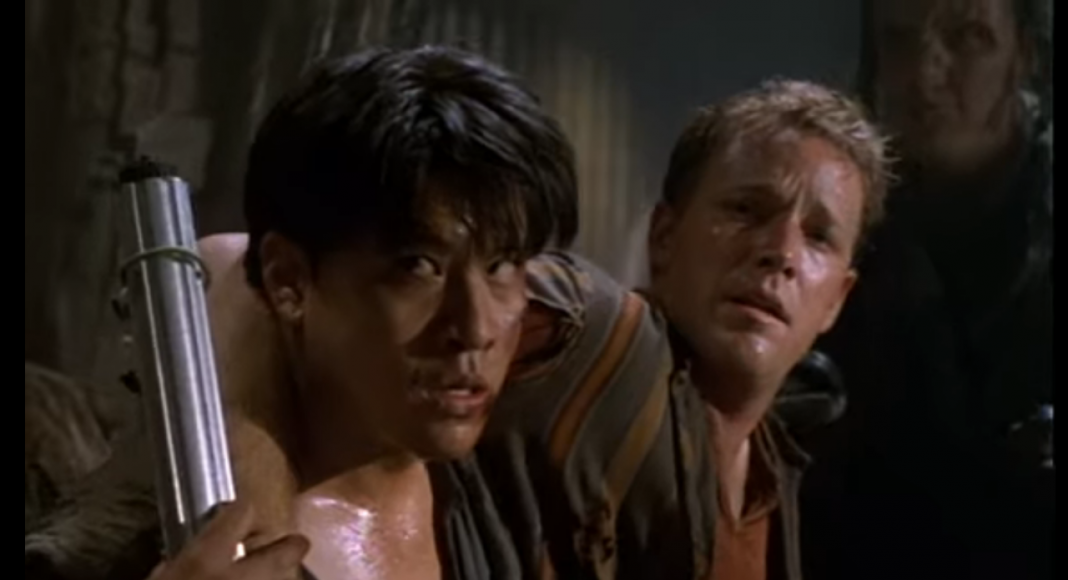 7 Years in uncharted territory, risking life and limb for his captain. But Harry Kim never rose from the rank of Ensign. We take a look at some at examples when Harry Kim deserved a promotion.

The Star Trek franchise has numerous mysteries. Arguably none more than why was Harry Kim an Ensign throughout the entire seven-year journey Voyager took from Deep Space Nine to Earth with a notable detour, courtesy of the Caretaker.

In the same time, across on Star Trek: Deep Space Nine, Nog went from being a loafer flicking sand peas at people disembarking their transports, to a freshly minted Starfleet Lieutenant following the Dominion War. In an alternative timeline future, Nog even Captains the U.S.S. Defiant. Then again in another alternative future, Harry Kim Captains the Nova Class U.S.S Rhode Island, although it is arguably a less prestigious posting than Nog enjoys as it’s a relatively small and arguably less relevant science ship (due to the age of the class) and the Defiant is literally a hero of the Dominion War. So why was Harry kept so low in the rank structure for the entire run of Star Trek: Voyager?

There are many instances that he earned a commendation at the very least, but for my money, he earned the step up to Lieutenant Junior Grade when an obviously malnourished Harry, armed solely with a pipe, risks his life for Lieutenant Tom Paris against a plethora of people intent on killing both of them and this is just the first of a few times he does this in the episode before Harry Kim and Paris’ rescue by Voyager and its crew. At the episode’s end, Tom tells Harry he will not forget Harry’s actions and the sheer bravery on display. While I am not a Starfleet Captain, I am also unsure totally how anyone can argue this is not an example of the bravery and exemplary nature which befits a promotion.

A mere year later, during ‘The Killing Game’, Voyager has been completely taken over by Hirogen and with the majority of the crew incapacitated by being forced into one of the Holodeck hunt simulations, a token force of crew are left to help the invading Hirogen maintain the Hologrid, the most senior of them being Ensign Harry Kim. Harry arguably helps to facilitate an essential part of the rescue. Admittedly, this is with the help of the Holographic Doctor and several unnamed crewmen, but without Kim’s leadership in this (and not to mention his obviously advanced knowledge of Starship operations – he is certainly a head of department for a reason), a promotion is surely warranted following this behaviour from a frankly exemplary and valorous officer.

Skipping ahead to nearly the end of the journey home from the Delta Quadrant many of the next examples are found in season seven’s ‘Nightingale’ in which Harry shows both sides of the promotion candidate argument.

It’s fair to say this episode shows Harry is woeful at the art of delegation. Members of his Nightingale crew are unintentionally kept from learning about how to best perform their roles by Harry’s own command management style which can perhaps be best described as ‘helicopter management’. However once Harry is made aware of this and how odd it is that he has fully furnished his ready room for a short mission, he adapts his behaviour and these perceived deficiencies in his command style are quickly changed.  This shows both that even nearly seven years into Voyager’s journey home, it’s Chief of Operations is maybe not ideal for Command or a Captaincy but also shows that with an absolute minimum of prodding, he can adapt to become the consummate candidate for an Ensign in Command, much like Ensign Sylvia Tilly a century before and a millennium after.

A key character trait that goes in Harry Kim’s favour for promotion was found in Season 4’s ‘Revulsion’. A clearly infatuated Ensign Kim is in the Mess Hall at night with a crew member he actually outranks, Seven of Nine. Perhaps due to her being wholly inexperienced as a human (this is merely three episodes after her severing from the Collective), an intrigued Seven bluntly instructs Mr Kim to remove his clothes in anticipation of a sexual encounter. For whatever reason, it is important to realise that at this stage, Seven possesses a female adult body, but is miles from being the more well-adapted adult she is both towards the end of Star Trek Voyager’s run in 2001 and in 2020’s Star Trek Picard. Harry Kim does what I firmly believe that anyone should do. He abjectly refuses to do anything with her. There isn’t an argument that if he had, he’d be taking advantage of her. While this isn’t exactly a reason, he earned a promotion he never received, as this is the sheer basic to expect of anybody, it is nonetheless behaviour worthy of note and speaks to a man capable of the right decision.

During ‘Timeless’, the 100th episode of Star Trek: Voyager (incidentally, this late 1998 episode is the last time to date any Star Trek show has hit this milestone), an aged Harry Kim and Chakotay locate the frozen remains of Voyager in 2390. During the episode, Harry frequently mentions he and Chakotay were somewhat obsessed with rescuing Voyager and its crew from their icy grave. They have also been obsessed with this for the unseen decade and a half between the crash landing into a frozen tundra and this episode. When coupled with Harry being not far removed from the ideal Starfleet officer from the day he first stepped foot on Voyager in 2371 to this episode in 2375, it is immediately apparent he has the required attribute of dedication required to get ahead in Starfleet’s promotion ladder. I know there is an argument to be made that Kim had a hand in the crash initially and his guilt to rectify the situation is part of his motivation to undo what had happened in the past. His determination to find a resolution cannot be discounted nor his ingenuity in the method to prevent the crash years earlier. It can demonstrate that given a clear objective, Harry Kim will move mountains in order to do what’s right, even at great risk to his own life, this is a key characteristic in any Starfleet officer.

Additionally, it must be noted that Harry Kim has suffered so often and so badly and arguably more than most; interrogation torture at the hands of the Caretaker in ‘Caretaker’, a mock execution in ‘The Chute’, and his own death in ‘Deadlock’.  While it might be argued that someone with such a serious past and suffering from possible traumas, should not have a position of responsibility, it is inarguable that, without a tremendous level of pressure or the experiences that come with it, one can never grow into a leader, demonstrated so well by the likes of the great Starfleet Captains, Jean Luc Picard, Benjamin Sisko, Kathryn Janeway and Gabriel Lorca (to name just a few). If their experiences of assimilation, literally saving Earth and the Alpha Quadrant and bringing her crew home against massive odds do not count as traumatic or pressured, then I’d love to find out what actually does.

In conclusion, did Harry Kim truly deserve a promotion? From the few examples, the answer must be an unequivocal ‘yes’. There are unquestionably a large number of other examples I could cite, (such as in the finale ‘Endgame’ when he helps the crew rally around the plan of using a Borg trans warp hub in order to return to Earth). It is an inescapable truth, however, that Voyager is mostly half a galaxy from home in the Delta Quadrant. Harry is a department head straight from the Academy, on a starship with bleeding-edge technology, where he is the night shift Captain for good measure. For me, he is deserving of even the relatively token gesture of a step up from Ensign to Lieutenant Junior Grade. In my view, he already has what should be expected to accompany a rank way above that of the lowest commissioned rank in Starfleet.

Just a final thought. Could it be argued that Harry Kim already had effectively gained promotion in all but rank? Night shift captain, extra responsibilities, active role in briefings and planning, I don’t remember ensigns giving feedback to Captain Picard in the briefing room? As he is on an extremely isolated starship in the Delta Quadrant, there just may not be the necessity to promote someone held in such high regard on a small Starship. Although this argument is seemingly weakened by Tom being reduced to Ensign and then advanced to Lieutenant J. G. in just over a year. If we are to consider Beta Cannon though, this argument is strengthened. Once removed from the isolated and small starship, Starfleet grants him the (arguably overdue) promotion he had deserved for years.

Do you agree with Jack? Do you think that over the course of 7 years Harry Kim deserved that long-sought-after promotion? Let us know and join the discussion via our social media.

Stay up to date with Star Trek by joining us on our social channels.

Where Can You Watch the Star Trek Universe?

TJ Jeffrey - March 28, 2021 0
This week marked several birthday's for some of Star Trek's greatest legends, kicking off the week with William Shatner celebrating his 90th. Tributes were...